The call of the Meadowlark in the distance is a forgotten melody that once played at every mile marker and every tenth fence post on Iowa rural roads.  The county and gravel roads no longer feature their sweet voice, but the echoes of their song still haunt the hills by Korsen Cabin. 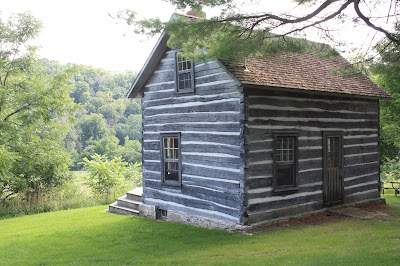 It is no small thing when the farmers actually take an opportunity to leave the farm behind for a couple of days. This is especially true in July.  There are hens, henlets, broiler chickens, turkeys and (of course) cats on the farm that require at least some of our care and attention.  There are crops that need harvesting and crops that need irrigating and the weeds grow three feet taller when you turn your back on them for a moment.

So, when the farmers leave the farm at this time of year, it is normally brief and it normally has something to do with a specific event.

The brief, two-night stay at Korsen Cabin on Seed Savers property was truly an aberration.  One that required a number of things to line up to make it possible. 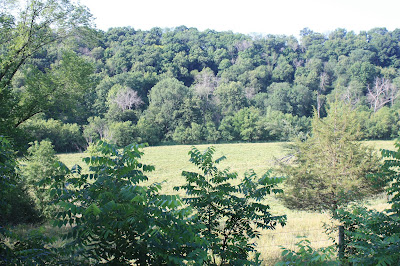 The turkeys and second batch of broilers are not yet out on pasture - they are still in the brooder (to be moved out this week).  That means only the hens and henlets are on pasture.  The bird chores are about as simple as they are going to be until the broilers go to the park in early September and the turkeys in late October.

We were able to listen to an eaglet crying for its parents to feed it (they were clearly trying to get it to start fending for itself).  We saw all sorts of birds, bats, butterflies, deer and.. cows.  There were some wildflowers and a variety of trees, including the old pines near the cabin.  We could hear Canoe Creek burbling at moments when everything else was still or when we strolled down closer to its banks.

We read books, conversed, played a game or two and listened as the Meadowlark snuck in a song or two in the background behind the host of other birds that were so much closer and much more gregarious.  Our Meadowlark friends were never close enough to us for their song to take center stage and we did not see the silhouette of their distinctive shape at any point during our stay.

It was almost as if their song was an echo of a time past - and we were allowed to hear the memory of their voice one more time.

Email ThisBlogThis!Share to TwitterShare to FacebookShare to Pinterest
Labels: a crate full of grateful