There are places on the farm that are, simply put, not all that pretty.  In fact, there are places at the Genuine Faux Farm where both farmers are intentionally blind.

Because opening our eyes and really seeing isn't going to make us feel all that good about the current state of some things. 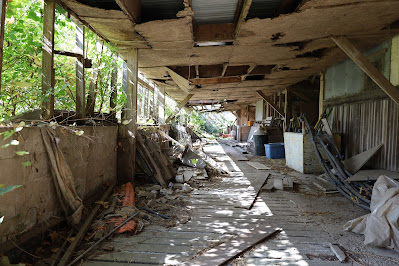 Case in point, I present the Poultry Pavilion.

This might be one of the least flattering pictures I could take of that particular building.  And I took it mostly because I was just trying something different with the camera.

And here is a picture from a similar orientation in 2005. 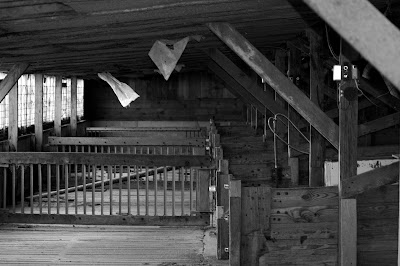 I suppose it looks more attractive because it is a black and white photo.

What you are seeing above is an image of a building that had, up until 2004, been used as a hog finishing confinement building.  It looks clean because part of the condition of our purchasing the farm was that the building have the pigs removed and be cleaned/power-washed out.

The building actually has a longer history than that.  In its first life, it was simply an open-front machine shed.  The section you are viewing in both of these pictures is the lean-to that was put in so there could be a covered manure pit as part of the confinement building.

Over the years, we have closed off areas of the machine shed portion for a brooder room, a hen room and a turkey room.  We've even put a new roof (out of necessity) on the main part.  But, the lean-to has, frankly, long been a thorn in our sides.  And it hasn't gotten better over the years. 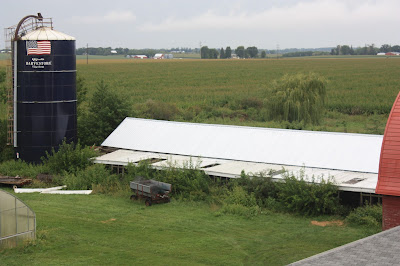 This is where our reality is.  We've put a fair amount of effort over the years to make this building work for us and our farm.  And, it still does.  But, there is always only so many resources available.  Whether it is time, money or energy, something always puts things like the long lean-to on the Poultry Pavilion on the "temporarily and purposely blind to it" list.

It's symbolic of life, I suppose.  We can't address every little ramshackle building that resides within ourselves.  So, we can only sigh as we walk by it every so often and make the perpetual vow... 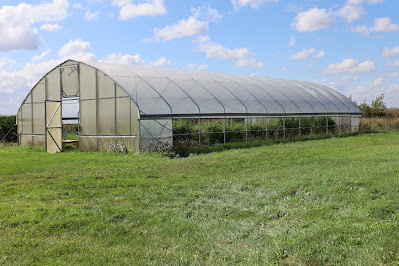