A Walk on the Absurd Side

We've had "General Strangeness and Minions" as one of our labels for the blog for some time now.  I realize we play pretty fast and loose with which sorts of blog posts land under which labels.  But, it's our blog and we can use labels any way we want to!  So there!  In fact, I have instituted a new rule that allows me to use a label name as the title for a new blog post.  Not only that, I will allow myself to reuse a good title if I want.  But, I don't want to this time, I'd rather walk on the absurd side!

It's just complete and utter anarchy in the GFF Blog-o-verse.  What's next? 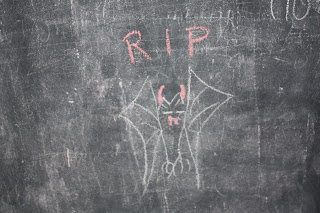 Oh, yes! There it is, the horned, fanged bat of the mighty chalk door!
Each year there is at least one thing that serves as a consistent "inside joke" for the farmers and the farm crew. This year there were two in particular that had a longer shelf-life.  The "horned-fanged bat" is something that requires hand motions to indicate horns and fangs and came about during one of our lunchtime forays into the absurd.

Oh wait.  That's how the other one came about too.  And here it is:

Bohemian Rhapsody (the original version by Queen) is a common occurrence on playlists Rob puts together.  Needless to say, whenever that song started, various crew members would pop up out of the weeds and yell "Mamaaaaaaaa!"

Who said farming can't be fun?

And maybe sometimes... a little odd: 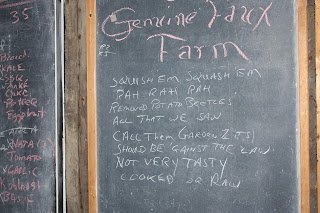 We know you've seen this one before.  But, it illustrates a bit just how absurd things can be at the Genuine Faux Farm.  But, here's the kicker: it's during times that we see more of this type of absurdity that we feel as if everyone is a bit more positive about what's going on at the farm.

Ok, maybe Hobnob is not feeling more positive about this little bit of absurdity.  In fact, Bree is looking a bit annoyed as well. 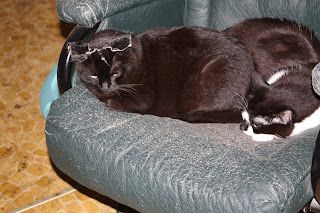 When we take the time to do something just a little absurd and maybe a little creative it shows that we have some positive energy - even if it is just a response to things that are difficult.  If you see a recent picture of one of your farmers doing a selfie - like this one: It's an interesting ability we humans have.  Take a negative situation - like rats killing turklets on the farm. 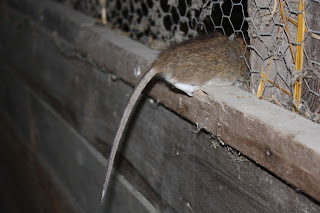 Then., you find a rat that got himself stuck in the chicken wire surrounding the turkey room and you suddenly have an absurdity that is ripe for humor.

But, it doesn't have to be as ridiculous or as dramatic as a rat with fat um.. hips, stuck in a wall.  It could be a farmer mowing down a field of ragweed with the rotary mower on the tractor who takes the time to work his way AROUND a patch of goldenrod. 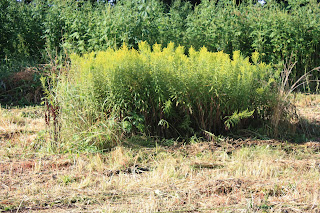 Why would I do this?  I like goldenrod.  I think that's good enough reason, don't you?  I'll give more positive reasons some other time.  But, that's not the point of this post.

It's all about letting yourself look at things like this picture and poke fun at yourself. 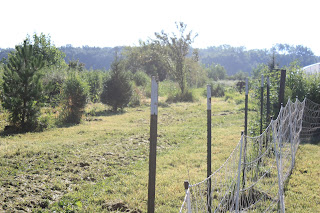 Well, I've got fence posts up for a permanent fence for the turkey pasture.  But, clearly, there is no fence there, so we're using a portable electric netting fence immediately to one side of the permanent "not quite a fence."

When time flies and you just have to make do, you have an opportunity to walk on the absurd side.
Posted by Rob Faux at 4:30 AM