Things (Farm) Records are Made Of

I am a baseball fan.  I loved playing the game, I enjoy watching others play the game and I also enjoy the statistics that come with it.  So, it shouldn't come entirely as a surprise that I enjoy collecting data about our farm and working with it every season as the numbers come in.

I know.  I know.  That's really strange, Rob.  I can hear you all saying it (or at least thinking about it REALLY loud).  But, I'm not hurting anyone, I still get my work done (if "done" is even possible) and I can actually learn useful things about how to farm better when I work with our farm stats.

What actually got me started on this was this: 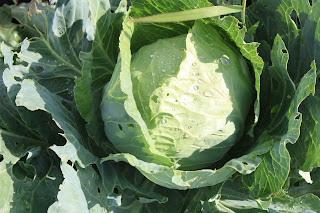 First question: "Rob, why do you even care?"
Second question: "Ok, we'll accept you care just because you do.  Is this record a big deal?"

In defense of my caring - consider my first paragraph.  Baseball fans are enamored with statistical records.  Even if you know just a little about baseball, you probably have some idea about why names like Babe Ruth, Hank Aaron and Barry Bonds are well known.  It is only natural that I might have at least a mild interest in records of all sorts.  The biggest difference between all-time home run record holders and most pounds of cabbage produced by the Genuine Faux Farm in a year is...

Well, ok.  There are many differences, I get it.  No need to rub it in.  I suspect even I won't refer to the "Great, Record-Setting Cabbage Production Year of 2017."  First, it doesn't really trip off the tongue so well.  Second, it probably isn't even that big of a record to break on our farm anyway.  We didn't really do much with cabbage production prior to 2012, so there really aren't that many seasons to compare to in the first place.  And, finally, the record has as much to do with a good growing season for cabbage as it does with our distribution of varieties.  We grew more Copenhagen Market and less Red Express.  One averages 4 pounds each.  The other, one pound.  Hence, a record is born!

Meaningful (for us) Records in Reach
It's the time of year in a baseball season that baseball announcers look at records that are in reach before the end of the regular season.  So, it seems appropriate for us to do the same thing.
It seems I am enjoying being provocative - if anything as silly as vegetable production records for our small farm can be provocative.  I suspect most people might agree that the broccoli record has an outside chance of being reached if our current broccoli plants do us proud with sideshoots AND the farmer is able to harvest them.  It is unlikely we'll get anything from a final (small) batch of broccoli, so it is up to the older plants to keep on going.  But, even if it isn't this year, there is hope that we could hit it some other year because we have consistently hovered in the upper 500lb range for some time (except last season).  I suspect we'll land somewhere around 630 lbs this year, which is still a nice showing. 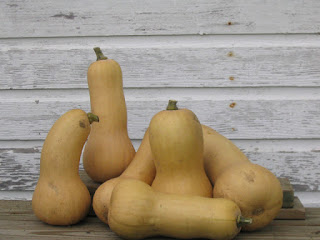 The winter squash, on the other hand, is entirely based on a future crop that looks good right now, but could just as easily disappoint.  The difference here is that winter squash are on an upward trend for our farm.  We've moved away from some of the variety experimentation and moved toward more pollinator attracting companions for our experiments.  If it's not this year, then it will be the next year that this record falls.  Unfortunately, these are famous 'last words' for a crop around here.  Predict success and OOOOH boy...  Superstitious much?  Let's just say no to that and move on.

Records That Are Like The Most Times a Batter Struck Out in a Given Ten Game Stretch
It does seem to us that sports broadcasters are working way too hard to say something special about a player or team with statistics.  Things like "this is the first time a player who went to middle school in Walla Walla, Washington swung at a third pitch in an at-bat since last week." 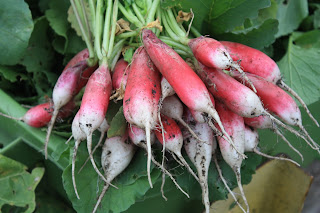 Case in point, radishes.  In 2011, we harvested 5336 radishes, which is the most we've recorded as harvested.  The thing about this is radishes are like the number of swings batters take in a ball game.  There are lots of the them.  And, with radishes you can completely change the game if you throw in one more succession than you have in previous years.  Suddenly, you break the prior record by 2000 radishes.... or 4000 radishes.  Then, the next year, you realize you really don't have a market for that many radishes and you drop the number by 6000.  So what?  It doesn't really tell us anything.  I would guess if we wanted a record that meant anything, we'd compare successions and we'd also make sure the row length was the same each time.

But, I said I liked statistics and records.  I didn't say I lived for them.

Records That Seem Like Ripken's Consecutive Games Streak
People didn't believe anyone would catch Gehrig, yet along comes Cal Ripken, Jr.  Is it possible we'll see a year where the 2012 green bean record of 1068 pounds is matched and then overtaken?  We've had multiple years between 750 and 900 pounds, so the capacity is there, I suppose.  But, do we have the will-power to do it? 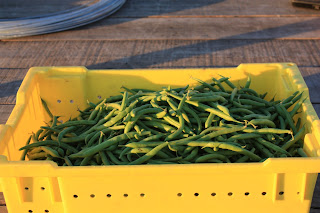 Green beans taste great.  We love green beans.  But, they do not harvest themselves and we are not going to grow the types of green beans that a mechanical harvester works best on.  I suppose if we had someone who was the "Cal Ripken" of bean harvesting we could do it.  Until then, we'll be happy getting to 500-600 pounds each season.

Records Like Nolan Ryan's Most Walks Given Up By A Pitcher
Nolan also has lots of records that fall on the positive side and is one of Rob and Tammy's all time favorite pitchers.  So, don't get us wrong here.  But, let's just say that there ARE records you might not want to break.  We make the case for the 2072 eggplant harvested in 2011.  We are in the middle of a good eggplant year this season (564 so far) and we've been happy in recent years to land somewhere in the 800 range. 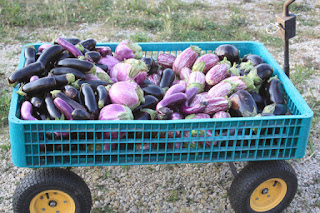 Let's put it this way.  People who really like eggplant have a limit to how many of them they want in a season.  Many people don't want any eggplant at all.  There isn't a particularly good market for eggplant in our area.  We are not inclined to develop a market for them.  So, why would we want to chase that record?

Records Like Tris Speakers' 449 Outfield Assists
Some people might like to see home runs.  Some like stolen bases or seeing pitchers strike out batters.  But, I think I've the thing I've enjoyed most are outfield assists.  In general, these are throws by an outfielder that lead to an out.  As a former outfielder, I can tell you that there is a good deal of satisfaction when you throw someone out.  And, I think we would thoroughly enjoy breaking the single season record for snack tomato production on our farm.  Snack tomatoes are fund to pick, good to eat and people like getting them from us. 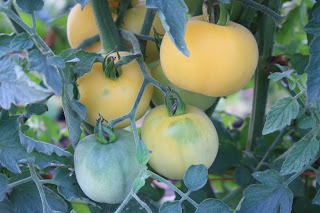 Besides, what veggie is more fun than a Wapsipinicon Peach?
Posted by Rob Faux at 5:00 AM

Email ThisBlogThis!Share to TwitterShare to FacebookShare to Pinterest
Labels: Excuse me sir - you appear to be listing, farm report, Just Veg-ing Out, Paint by Number