What's Wrong With This Picture

Getting a different viewpoint from above seems to get everyone's attention.  After all, unless you are a pilot or you do a good deal of air travel, you don't see things from this perspective.  If you do travel by air and look out the window, you don't necessarily get to see a aerial view of where your home is - so satellite images can be intriguing and very hard to turn away from.

For your viewing pleasure, here is a satellite image from 2016 (we believe) that includes our farm and the surrounding area. 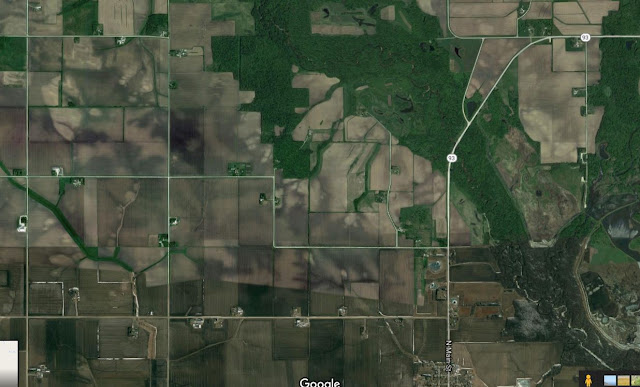 This picture is a little odd because it shows some imagining from later in the year at the bottom part of the frame, so corn and soybeans are starting to germinate in those fields while the field in the upper portion are not showing much.  The town of Tripoli is at the bottom right and some of the Wapsipinicon River greenbelt runs through the picture from lower right to the center top.  Our farm is located just above the road that takes a sharp right turn at center left.  We're the smallish green rectangle.

So, what am I seeing that makes me concerned?  It's the lack of green.

Simply put, we don't need as much corn and soybeans as we grow.  We only grow as much as we do because there is a small subset of people who use it as a vehicle to generate money.  Note, I am not saying they use it to generate an income.  I am fully cognizant of many people who farm and rely on these crops to generate their income so they and their family can live.  I am also aware of people who earn incomes because they have jobs that have something to do with corn and soybeans.  They generate their incomes within the current agribusiness/government constructs.  I get that.

But, in my opinion, there is a subset of people who already have a good deal of money that spend time speculating on ag futures or that drive large ag industry businesses that have too much say as to what is grown and how it is grown.  The world does NOT need this much corn and soybeans.  It's just that there is a huge system in place that gives these two crops more value than they probably deserve at this time.

Rather than continue to rant about how things are not right in the world, let me say this:
I think many of the farmers and land-owners in this state want things to change.  But, I also suspect that there are two things that are stopping them.

1. Change is scary and it is hard to know where it will lead and whether it will hurt you or not.
and
2. People aren't sure how to go about making change.

Let me throw out a few suggestions for some small changes.  After all, ranting about how bad things are doesn't get anything done unless you have some ideas to make things better.

A. Use GPS in modern equipment to intercrop
If we've got the technology to have self-driving tractors, we have the ability to run strips that are one planter wide of crops that complement each other.  Is it a bit more complicated to do?  Sure.  But, the tools should be making this so easy now.  It's more a matter of figuring how to deal with borders.  Please don't tell me we don't have the tools or ability to figure that issue out - after all, that would be insulting given the other problems we've found solutions for...

B. Use some of our federal ag funding to push late season cover crops to hold the soil
If we're going to continue to provide funding to our row crop farmers then maybe we should do something that has been shown to help maintain soil health, cut down on erosion and diversify the landscape.  If we work on figuring out the best way to do a fall winter-kill cover crop we don't have to add more herbicide spraying to get rid of the cover prior to planting.

C. Start putting buffer strips between all fields
I get it.  It's your land and you need it to earn you money.  That's why you till as close to the edges as you do and that's why you see the idea of buffer strips between fields (and fence rows or tree rows or ...) as bad things.  In fact, this is the reason so many farmers didn't maintain green areas to handle rain run-off without it taking soil away.  Now that there are Federal programs that pay farmers to put in these green strips, farmers will do it.

But, why do you pay the insurance premiums you do for spray drift insurance?  It's partly because you want to till right up to your neighbor's fields.  Have you considered the possible cost savings that might offset the yield lost for a simple buffer strip - say 20 feet on your side of the fence and 20 feet on the other side?

D. Apply ourselves to simply farming better
I refuse to believe that every farmer wants to do just the minimum on their farm.  I prefer to believe that many (and perhaps most) farmers want to do a better job with the land they work.  But, we need to change from 'working' the land to being 'stewards' of the land.

A good steward doesn't just run monetary numbers for the bottom line.  A steward looks to the health of the entire system - the whole farm.

Just some food for thought.
Posted by Rob Faux at 4:30 AM