Every year we do as much as we are able to extend the bloom season of flowers on the farm.  We are concerned that we provide food for pollinators and other beneficial critters for as much as the season as we are able.

Well, it seems obvious to us that the surrounding fields of corn and soybean are less than ideal for most of these critters.  There is minimal diversity in habitat, a very limited bloom season (therefore limited food resources) and the application of chemicals on these fields makes things even less attractive.

We figure if we create attractive habitat on our farm for as much as the season as possible, there will be no reason for our friends to leave us and travel in dangerous territory.

Late March to April
Of course, we do have a great many dandelions on the property and we are perfectly happy to let them bloom.  I realize there are people out there who are horrified by this.  But, in the grand scheme of things, dandelions are actually not a big deal from a weed perspective.  They have deep roots that pull up micronutrients for other plants to use and the bloom and attract all sorts of pollinators at a point in time when those who have fruit trees would really like to have them around. 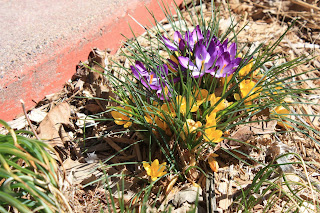 Every Fall about this time, we play with the idea of getting large numbers of crocus and daffodil bulbs with the intent of 'naturalizing' an area with them.  Why don't we?  Well, our plate is usually too full and we just can't find the time to do it. 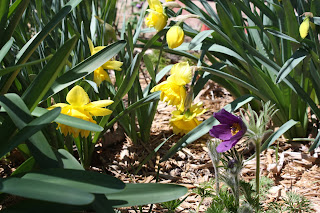 Even so, we've got a fair number of blooms on the farm

May Busts Out All Over
The month of May heralds a nice mix of flowers, many of which show up in some of our intentionally 'wild' places.  For example, we have some yellow and purple Siberian iris that like to show off.  We've let them spread as they would like and we're happy that they seem to think our place is an ok habitat for them. 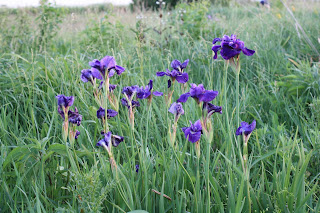 And, of course, the German bearded iris start to show on our farm in May.  I have to admit that they seem to take center stage with our picture taking, much to the chagrin of so many flowers appearing on the landscape.  In fact, the iris don't usually show much attractive qualities for the critters we desperately want.  But, I wonder if there would be more activity on them if we didn't have so many other things for our workers to investigate. 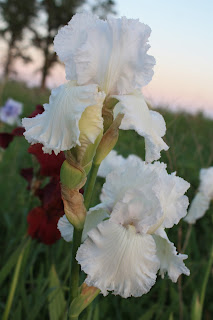 Clover if typically getting going in May and you'll often see painted daisies, anemone, creeping phlox, peonies and other neat flowers showing off.  In fact, we start getting so many flowers that Tammy and I have a difficult time differentiating between May and

June - Bugs and Blooms?
June on the farm is unfortunately known for the bugs that seem to like to snack on farmers at GFF.  The winds are typically not as strong - or at least not as consistent.  It makes work difficult and it makes enjoying the flowers challenging.  And yet, we have to take it as a sign that there is some health in our ecosystem if there are insects that think we are food (I suppose). 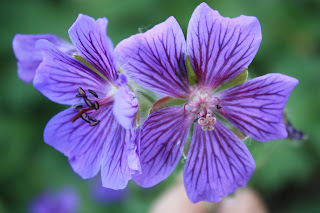 The thing is - we're usually so bugged by the bugs that we don't have time to investigate the bugs we want.  And that bugs me.  You're welcome.

We've got perennial geraniums covered in blooms early in the month and by the end of the month many of our annuals are starting to consider showing what they can do.  Though, it's really the next couple of months that we usually have more annual flower activity.

July is Full of Smiles
Our big flower highlights tend to be daylilies in July and into early August.  Just as we have noticed with the German bearded iris, these daylilies do not tend to be the focus of insect activity.  We suspect that the highly hybridized plants have been selected for so long with consideration for how attractive the flowers are to humans that much of the attractiveness to insect species has been bread out of them. 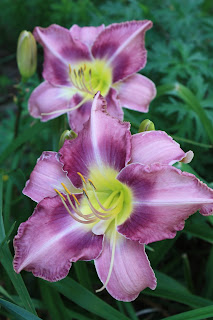 And this is why we continue to promote clover on the farm and why we're happy to have ditches with a bunch of ditch daylilies.  Daisies and coneflowers start to appear and many of our perennial spices are begging to show more flowers.

August Sunshine
It feels to me like yellow is the color for August flowers.  The helianthus and heliopsis, along with rudebekia can really put on a show.  And, they're all attractive to our insect workers.  The zinnia, marigold, four o'clock, salvia and other flowers really get going and the hyssop are often covered with smaller bees and bumblebees. 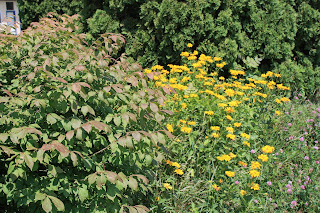 Then there is the under-rated goldenrod.  Many people still mistakenly believe goldenrod is one of the wildflowers responsible for high pollen counts that make people with allergies miserable as August progresses.  However, goldenrod pollen is too heavy to really cause the issue.  You can blame most of the issues in our area on ragweed.  Pollen for those plants is quite able to be airborn and travel quite some distance. 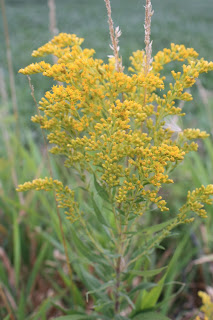 September - Returning to Blues and Whites
There are still some clover blooming in September, though it has a good deal to do with late Summer rain amounts.  But, perennials such as sage and thousand flower aster begin to show off in September.  Other than the tail end of hibiscus blooming season, it feels like plants that peak at this time focus on LOTS of smaller flowers. 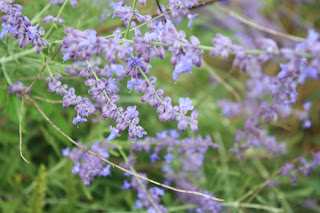 The hummingbirds we often see on the farm check out the hostas, zinnias, phlox and Rob's hat.  The butterflies can be seen in the marigolds, zinnias, clover and other flowers.

But, perhaps the hardest part for us to remember this season is that many of our insect friends simply need a little shelter.  We haven't had much rain at all for many weeks, so plants that aren't irrigated are growing very little.  That means each time we do some 'clean up' around the farm, the plants will not fill in nearly so quickly.  In short, that means we sometimes need to consider NOT cleaning something up so there are still good places for our katydids to hang out.  While neither of us is a huge fan of the sound of a cricket at night, we both agree that the katydid is a welcome sound at night.

Overall, this has been a reasonably good bloom year on our farm and here's to planning out ways to make the next year even better.
Posted by Rob Faux at 4:30 AM