September, the month of despair and hope.

How's that for an introduction to a newsletter?  Oh, you'd like some explanation?

Late August into early September is the point in time where growers, such as ourselves, begin to fully realize that there is no longer a chance to fix any mistakes that might have been made with respect to this year's crops.  Yes, there is still some planting going on and there is plenty of harvest yet to come.  But, we just aren't going to save the crop in the far northeast field (for example).

On the other hand, if we take the moment to reflect, we will find moments of success that make us feel like, perhaps, we aren't so terrible at what we do.  In fact, we're actually pretty good at some of this stuff.  And, there are just some things that can't be helped, so success is defined by how you handle those events.  It's enough to make you start thinking about the things you'll do differently and better next time around. 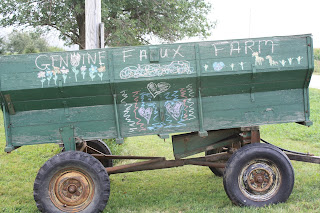 Look for future promotional efforts.  We'd like to add about 10 more members.

Broiler Chickens Available
The second batch of broiler chickens went to "the Park" on August 23 and then "Freezer Camp" on August 25.  We have at least 100 birds looking for homes.  Would you like to invite some of them to yours for dinner?

Price is $3.50 per pound for a whole bird.  The average weight for this group was around 4.8 pounds.  They are day range birds, which means they go inside for their protection at night, but run in pasture during the day.  They forage and receive feed that was mixed at the Canfield's farm near Dunkerton.

Turkey Reservations - Time to Get Them In
Our turkeys are getting bigger and we are teaching them all about their opportunity to join families all over the Cedar Valley for Thanksgiving as the guest of honor.  They are excited by the prospect.  Would you like to host on of these birds at your home this year?  Let us know.

Song of the Month
Rob 'discovered' Thrice a few years ago even though they have been around for a while.  They reappeared this year with a new album and it appeals to some of the heavier rock vibes Rob appreciates.  But, why did we select this song?  Well, "There are Fauxes in the garden..."   When, the lyric references you, you have to include it.  What?  Not that kind of Faux?  Hmmm.  Now I'm confused.

Recipe of the Month
This recipe uses a large number of the things you get in August and into September from a CSA share:

1. Preheat oven to 400 degrees F.
2. Using a large oven-proof pan over medium high heat, saute onions in olive oil until they begin to soften, about 5 minutes. Add garlic and reduce heat to low.
3. While the onions and garlic are cooking over low heat, put 2 tablespoons of olive oil in a another frying pan over high heat. As soon as oil starts to smoke, quickly add enough zucchini cubes all at once to cover the bottom of the pan. Keep on cooking over high heat, stirring, until zucchini is lightly browned on all sides. Remove zucchini cubes, and add them to pan with the onions.
4 Repeat process until all of the zucchini cubes have been cooked. Do the same with the yellow squash. Make sure to add a little olive oil between each new batch. Continue with the bell peppers, then the eggplant cubes, adding the browned vegetables to the onion pan as soon as they are cooked.
5 When all the vegetables (except the tomatoes) are browned and in the pan with the onions, increase theheat to high and stir, making sure they don't stick to the bottom of the pan. Add salt to taste, thyme, bay leaf, and rosemary, the vegetable stock, and stir well. Place in oven for one hour.
6 Boil water in a saucepan on stove. Remove stems from tomatoes, and crisscross the bottoms with a knife. Plunge into boiling water for a minute or two, until skin starts to fall away. Rinse in cold water and remove skin. Cut tomatoes in half lengthwise, remove seeds, chop coarsely, set aside.
7 After the vegetables have been in the oven for an hour, remove from oven, drain vegetables in a colander set over a bowl. Clean browned bits (if any) off bottom of pan with a paper towel. Return any liquid to the pan and reduce to a thick glaze over medium high heat. Keep on adding juices to the pan as they run out of the vegetables into the bowl.
8 When all the juices have been reduced, return vegetables to the heavy pan. At this point the ratatouille should be moist and shiny, with very little liquid. Turn heat off. Add the chopped tomatoes and cover. If serving as a warm side dish, let the ratatouille stand for 10 minutes, just enough to "cook" the tomatoes. The ratatouille can be served at room temperature or refrigerated and reheated the next day.
9 When ready to serve, remove the bay leaf, and season to taste with salt and pepper.

Field Report
The past month saw us dry out a fair amount.  We got a bit of rain here and there to keep it from getting serious, but we wouldn't say no to a gentle rain about now.  Temperatures have been much cooler than usual for most of the month of August.  So, things that like cooler weather have been happy.  Warmer weather things - not so much.  But, we've had plenty of sunshine, so that offsets the negative impact of cooler weather somewhat.
The winter squash crop continues to look good, even if it seemed to start slowly for us this year.  We got the field weeded/cultivated in a timely fashion, so this may be the best this field has looked in years.  We've had lots and lots of squash flowers out there, but it has yet to be seen if we have the pollinators to lead to a nice big crop.  We remain hopeful, as always and things are looking decent so far.

We're starting to gear up for the tater digging sessions.  We never know for sure what the crop will give us until we dig it, but we can take some guesses based on the health of the plants.  Some varieties are going to be pretty sad.  Others should be fine.  We planted twelve beds of taters this year.  Tammy and I agree that if we can get a good, solid harvest from five of them, we'll be just fine.  It's not what we were hoping for, but it's what we need to be reasonably successful for the season.

The high tunnel peppers are trying their best to carry this year's load.  They've been high quality fruit with excellent taste, but it is still a fraction of what we expect most years.  We just remind ourselves that these things happen - which is exactly why we split crops between field and high tunnel (among other things we do to 'hedge our bets').

We mentioned the pollinators for a reason.  Our summer squash and zucchini plants have been fine this year, but production numbers continue to lag behind what we brought in per row foot prior to 2010.  Soil tests tell us we're doing fine with fertility and composition of the soil.  Our growing techniques have gotten better since then.  We've even moved to some F1-hybrid varieties for the increased production per plant.  The weather doesn't account for the decline entirely, which leaves us with the pollinator issue.  Once again, we put in the plug that we (all of us) need to work to reverse the damage we are doing to our insect population with the overuse of pesticides and destruction of habitat.


Picture of the Month
You've probably figured out that our picture of the month comes from the prior month at the farm by now.  We had a seriously good crop of broccoli that came in during August, so this seems only fitting. 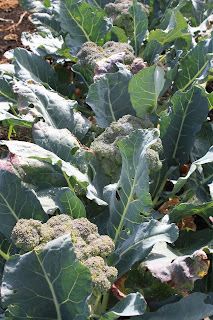 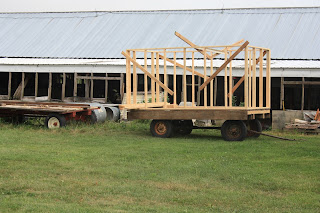 Time to Have Pun
Did you hear about the photographer?  He died from exposure.  It wasn't a pretty picture.  Some people say that it wasn't an accident and another photographer was arrested under suspicion of murder.  I think he was framed.  We'll tell you more as the situation develops.  Film at ten.
Posted by Rob Faux at 4:30 AM