Sometimes, It's Not About You

It's only natural for there to be some variability in our crop production from year to year.  The whole point is to become skilled at figuring out how to manage for that variability in a way that overall farm production is consistent.

HOWEVER (you had to know that was coming, didn't you?)

It's only human to wonder what you did wrong when a specific crop does relatively poorly and to take credit when that crop does exceptionally well.  But, sometimes - it's not actually about you.  Sometimes, it just wasn't a particularly good year for a given crop in your area (or for your farm).  In some seasons, the weather just doesn't favor that crop.  It may not matter what you do, the results are not going to be there.

And, now we get to the fun stuff.  You can guess why I am writing about it.  If you need a hint, here is a crop report post from October of 2016 (last year).

A Decent Start
We can point to a number of factors that might indicate why we are seeing some success this year with our tomatoes after last year's 'woes.'  We felt like we did a nice job getting things done this year with our tomatoes and we felt that perhaps we didn't do nearly so well last year.  Except, we have evidence that we really weren't doing so badly.  Below is a picture of some of this year's field tomatoes in August for comparison. 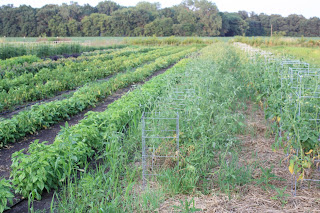 Certainly, there was some difference in our performance between 2016 and 2017.  But, the big difference was that we didn't get to caging some of the tomatoes in 2016.  This year, we just planted fewer tomatoes because we realized we can't handle as many as we planted in the prior year.  Otherwise, we had just about the same number of tomatoes caged, trellised, mulched, etc at about the same time in both years.  In other words, our care for the plants wasn't so different that we should expect much change in the yield.


I selected this variety for comparison because it is one we have a long history growing.  We grow more of this tomato than any other because it has been reliable for us over the years and we like the quality of the fruit.  Last year's production for this variety was abysmal (from our point of view).  Even the SIZE of the Italian Heirlooms in the high tunnel were disappointing as compared to other years:

Signs That All Things Are Not Equal
There were a number of indicators that there were some factors that were likely beyond our control last season.  For example, we had an issue with basil blight last August that pretty well finished our basil by mid-August.  This is a problem we have never seen before and was not really known in the Midwest - but it popped up in the Midwest last season.

And the high tunnel plants just seem much more vigorous and much more willing to reach for the sky (so to speak).  The picture below shows plants in Eden in early September.  They've put on a good deal more growth since that time. 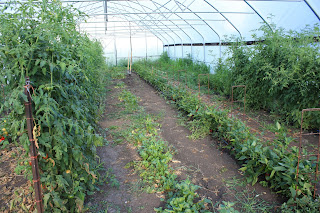 And, unlike last year, we're seeing the normal clustering fruit development that we expect in many of our snack tomatoes.  Last year, clusters were sparsely populated, which would explain some of these numbers:

And frankly, the Jaune Flamme plants in Eden don't look like they'll quit for a few more weeks (if then).  150 fruit per plant is definitely in reach this season.

Even Reliable Producing Cultivars Took A Season Off in 2016

And, after you consider them, remember that we have more to pick for this season.
Perhaps it isn't all about us.  Maybe next year I'll just drop a bunch of seeds in the ground and let them do their thing?
Posted by Rob Faux at 4:00 AM

Email ThisBlogThis!Share to TwitterShare to FacebookShare to Pinterest
Labels: Just Veg-ing Out, Look in the Mirror, Paint by Number