I had someone state a common lament to me recently.  "I just want to go back to the way things were."

We can all understand that sentiment at some level or the other.  There was a time when you knew less and were aware of less, so things were simpler - yes?  Perhaps you had less responsibility?  Or maybe you are having trouble navigating the uncertainties of today.  After all, since you've already lived yesterday, if you could go back and live it again, you might have a shot at doing better because you had some insight as to what would happen.

I have also heard people make claims that the current generation "doesn't know how to work" or that they "don't care about anything."  And, "things worked better then."

Yep, I'm sure they did and I am also sure that they didn't!

I thought I'd show you a few postal history items from my collection that I enjoy very much.  But, instead of boring you with all of the fine details I find interesting, I am going to point out imperfections.  All of the items below are from the 1860's and were mailed in the United States with the intent of going overseas to Europe.

The first item shows a piece of mail that was sent to France in 1862.  Three different stamps were used to add up the the 30 cents required to pay for a piece of letter mail that weighed over 1/4 ounce up to 1/2 ounce.  From a collector's standpoint, this is a very nice looking item.  The colors are bright and the envelope is pretty clean - especially considering it is almost 160 year old.  I like it - that is for certain. 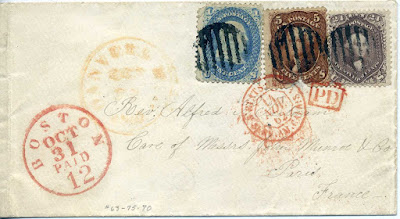 But, look carefully at the bottom center of the brown 5 cent stamp.  There is a nice little chunk out of the stamp.  Many people living today barely understand the function of a postage stamp, with the advent of the internet, email and social media.  Even fewer will recall fully that stamps came in sheets with perforated holes that were intended to give you a guide so you could 'easily' separate them.  You also had to wet the back of the stamps (usually by licking them) to activate the gum so it would stick to the envelope.

Many of you might remember that - but remember, the US Postal Service has been issuing primarily self-adhesive stamps since the 1990s and the first self-adhesive was actually issued in the 1970s!  Most people under the age of 30 will not have the experience of separating these stamps unless they are or are related to a stamp collector!

Some collectors are nostalgic for the 'good old days' when these water activated gum stamps with perforations to separate them were the norm.  But, I am certain they are forgetting how often the stamp itself would tear in the wrong place (like the 5 cent stamp above) if you rushed the job.  They are conveniently omitting experiences where the gum on a sheet of unused stamps would get wet (for whatever reason) and they would stick to each other - or other things that you didn't want them stuck to.  I am also guessing they don't remember the time their cat found a sheet of stamps and licked them until they folded over and stuck to themselves.   Ok - that one is mine.  Thanks Strider.

We live in a world where things aren't perfect.  And, the solutions we create for problems rarely work out on the first try.  And, before you try to tell me that we were better at that sort of thing in the past, I'll remind you that we have always used the trial and error process with varying degrees of success.  This is true now.  It was true then. 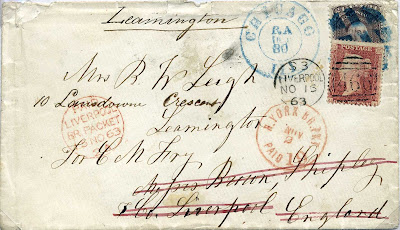 The letter above was mailed in 1863 from Chicago to Liverpool England.  It was then forwarded to another address in England.  The 24 cent stamp paid for the mail from the US to England.  The red stamp paid the forwarding postage.  But, that's not what I want you to look at.

Look in the blue circular postmark that says "Chicago."  The letters inside the circle at the top are "RA."  These letters were part of a short-lived experiment that likely was an attempt to help the post office find the person(s) who sent this letter if it should be returned for any reason.

You see, they didn't use return address labels AND it was common for mail to be refused or for a recipient to have moved on with no where for the item to be forwarded (or bad addresses, etc).  Such items would go to the "Dead Letter Office" where clerks would attempt to ascertain who sent the letter in hopes that they could return the contents.  This was especially important if the sender was mailing anything of value.

Well, even in 1863, there were lots of people in Chicago.  How do you find the sender of a letter in "Chicago" if they leave no further clues in the content?

Well, what if you use some codes in the postmarks to indicate how things were routed OUT of Chicago?  That might limit where you need to look, right?  So, the "RA" has been deduced to likely mean "Randolph" train station.  It's actually a fairly clever idea, but it apparently wasn't deemed a success after a short trial.

Since that time, we have made return addresses at the top left common practice and we have implemented ZIP codes to help focus where things go in our postal system.  And, if you want to pay for tracking, you can see where your mail is going as it finds its way - assuming no one makes a mistake.  So, it wasn't perfect then - and it could likely be improved now.

I'll close with an item that has 30 cents of postage on it to cover the 28 cents of postage due to a destination in Germany in the 1860s.  I'd like to remind everyone that 2 cents in 1865 was a bigger deal to people than it is now. 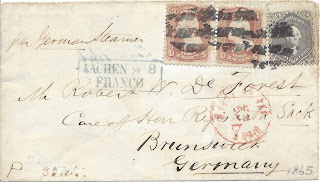 There are two things going on here.  First, the postage rate had declined from 30 cents to 28 cents early in the decade.  In fact, there was still an option to send mail without postage.  So, if someone in Germany sent a letter to someone in the US unpaid, the recipient would need to pay 30 cents to receive the letter.  It was a simple matter of reading the postal tables incorrectly.

Or, maybe it had to do with convenience?  There were 2 cent stamps issued at the time and there were one cent stamps as well.  In other words, there were plenty of ways a person could select stamps to add up to 28 cents.  Is it worth it to over pay by 2 cents if you only had 24 cent and 3 cent stamps?

Human error won't leave us.  I misread things, you misread things.  We also make daily decisions about what is going to be 'good enough' and often accept less than perfection as an acceptable result.  It is not new and it is not likely to change.

That may be true, but I'll make an exception.  Each of us can continue to apply ourselves to be our best in the present by learning from the past and thinking about how the things we do will affect the future.  That's also something we humans can do.
Posted by Rob Faux at 5:30 AM