Everyone has a 'favorite' set of stress dreams that come to visit when things are feeling a bit out of control.  The most common one I've heard other people share is being somewhere with a bunch of people and suddenly realizing that you are naked.  A close second is the one where you realize that there is a class that you were supposed to be attending, but somehow you have missed all of the classes and today is the final (there are several variations of this one, but the gist is the same).

All the way back when this blog was 'new' I shared a stress dream featuring our turkeys (among other things). 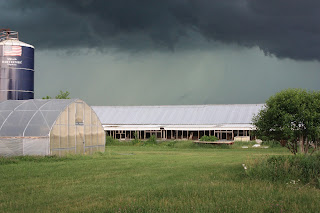 For me, the two most common themes that appear when I am stressed and dreaming are:

1. the impending storm
2. being responsible for teaching others and having things go wrong so that people eventually leave/disappear or stop listening

I have had the first stress dream semi-frequently for most of my life.  Once we started farming, this really became my 'go to' stress dream because I really do have a concern for and connections with the weather.  Typically these dreams start going bad by featuring a tornado.  But, my tired brain doesn't know restraint.  By the time I notice there is not just one, but three or more tornadoes, I get a clue that it IS just a dream and I wake up.

I even caught myself saying out loud, "you can't fool me -  you're just a dream."  Happily, Tammy is a sound sleeper most of the time, so I don't think she caught that one.

The second dream used to occur frequently when I was teaching college courses.  It would often feature markers that wouldn't write, uncontrolled distractions that pulled attention away from everyone or... most horribly... my own lack of focus as I try to figure out exactly WHAT was so important that I tell everyone in the first place.  These are usually a bit harder to identify because my brain is a bit more creative AND restrained at the same time.  It selects events that are plausible (and perhaps have evened happened in waking hours) and these dreams usually last until I get so frustrated that I wake up out of spite. 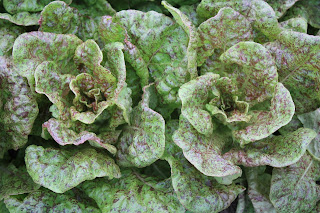 I was having all kinds of trouble with the lettuce crop.  I planted the wrong seed.  I planted the right lettuce seed, but they turned into zinnias.  Then, I kept stepping on the lettuce plants as I reached down to harvest them.  And, of course, there was the scene(s) where I just couldn't find them.

I know I planted those around here SOMEWHERE!

But, I woke up at the point where I realized the lettuce I was about to harvest was shrinking or growing backwards towards seedling stage.  I've got to hand it to my brain, this was one of the more entertaining stress dreams I've had in a while.  I seem to recall recognizing it for what it was well before I woke up all the way.  In fact, I think there was a thought somewhere along the lines of ..

Here's hoping that, if you must have a stress dream, it will be at least half as entertaining as this one was.  Have a great day everyone!
Posted by Rob Faux at 5:30 AM

Email ThisBlogThis!Share to TwitterShare to FacebookShare to Pinterest
Labels: X-games