Most seasons at the Genuine Faux Farm are packed full of activity and it seems that we're always behind on our tasks or very much about to fall behind on our tasks.  This year is, of course, no different from all of the others.  The issue in May through June is that our farm often gets too wet to do field work and our planting windows are shortened because of that.

This year - even though we are reducing the number of crops that are going into the ground - we have restricted our planting windows further.  First of all, there are our work schedules.  If you have a meeting, you have a meeting.  This remains true even if conditions are currently perfect for planting.  If you have a deadline to produce something for your job, you need to meet that deadline - even if you just watered a bunch of lettuce in trays that really would prefer to be in the ground.

Then, there is the reduced available labor on the farm due to a combination of our scaling down and the COVID-19 pandemic.  It's just Tammy and I right now, even though we are reaching out to see who is willing to be on-call workers.  The reality is - the windows for planting are smaller and we're still trying to get it all done as best we can. 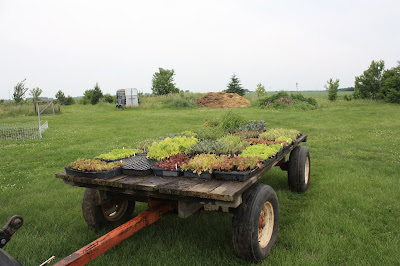 That leads us to Thursday of this past week and the marathon that has been the past week for both of us.  The day started with getting the turklets settled - which included scooping out the part of the brooder room that had previously housed the henlets.  Interspersed throughout were phone calls for Tammy with respect to her job as faculty for Wartburg and tasks for Rob with respect to his Pesticide Action Network job.

The afternoon and evening was filled with setting up irrigation, prepping ground for planting and, of course, the actual planting.

As you can see by the photo above, the soil is not in the best condition in this field.  Part of the problem, of course, is that we've had some heavy rains.  Another part of the problem is that we have done some digging for swales in this area this Spring.  The net result is that the ground is hard and it breaks into hard clumps.  It should be better next season after we run a late season cover crop and it goes through a normal freeze/thaw cycle.  But, for now, it is what it is.

And, what it is - is it is darned uncomfortable to kneel or crawl on it.  We did run the tiller through to soften it up a bit, but that still doesn't really solve the problem.  Only time and proper care will do that.

Inspector was sitting next to our young kale plants in the photo above.  But, we also got broccoli, cauliflower, romanesco, cabbage and lettuce planted! 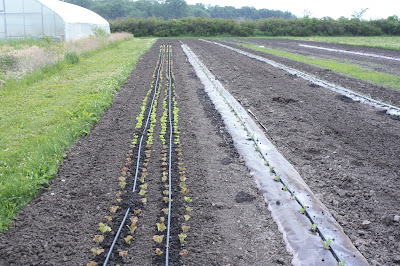 Speaking of lettuce.  We were pleased that we were able to sell nearly all of our first succession of lettuce before it started to bolt.  This is in large part because Jorgenen Plaza was able to start taking lettuce again AND the Northeast Iowa Foodbank applied a grant they had to purchase some produce from us - to the tune of about 50 pounds of lettuce.

This is something we wish foodbanks could be empowered to do more often.  It isn't about us wanting their money per se.  But, it is about the reality that so many who try to grow for local markets would likely be customers of the food banks themselves if they weren't already raising food they can eat.

Now, before you take this wrong.  We have donated food to the food bank in the past.  We are also regular financial contributors to the Northeast Iowa Food Bank.  I am not saying that to receive praise, I am bringing it up to be clear about my intentions.  It is just easiest if I talk out the idea from the perspective of our farm, rather than pretending to know how everyone else might see it. 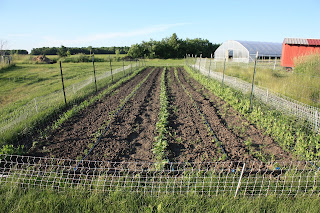 What if a food banks would be empowered to enter contracts with local producers for consistent high quality (and local) produce?  I know this is not an entirely new idea and it likely has been tried (or is being done) in places.  But, I just don't hear about it all that much.

First of all, I suspect many growers, such as ourselves, would be happy to provide contracts that were favorable to the food bank if they are able to do so.  Most of the growers I know already make significant donations of 'excess' produce.  It was a regular occurrence for farmers' market vendors to bag up product still on their tables for either the food bank or another worthwhile organization and send it along with no thought for compensation.  All of that food was perfectly fine and tasty - but they were still the items left behind after a market.

Don't the people who need help deserve some of the best product out there just as much as anyone else?  If a grower had a contract to grow... oh... lettuce, for the food bank, then the food bank would be treated as any other customer.  The grower would expect to provide top product, properly cleaned and packaged per whatever agreement they had.  It would be fresh - not having sat on a market table for three hours.  It wouldn't be a left-over product.

There is another indirect consequence of this idea.  Supporting local growers (local businesses) could help to reduce the desperate need for the food banks themselves.  A consistent growing contract gives the small farm a consistent baseline to work from.  It makes them more likely to hire another individual who could use some income.  And it makes it less likely that the farmers will call it quits and find themselves waiting in line at the food bank themselves.

Yes, yes.  I realize that I might be making this all sound much grander than it would actually be.  But, we get success by doing hundreds of little things that lead to a bigger and better whole.  Could this be an important 'little thing' that might help move us in the right direction?

I'd love to hear comments about this idea if you are willing to share!
Posted by Rob Faux at 5:30 AM

Email ThisBlogThis!Share to TwitterShare to FacebookShare to Pinterest
Labels: Planting a Seed, whether wythards