What IS Rob's New Job?

There have been many mentions in farm emails and the blog regarding Rob's new job with the Pesticide Action Network.  What you see below is a draft of a blog I wrote for their Groundtruth blog recently and the fully edited version can be viewed here.  You might note that the title is different than the one shown here.  Obviously, I thought this one was clever, but it doesn't always translate when you're trying to write for an organization rather than just yourself.

I am showing this here to illustrate clearly what I am hoping to be able to do with my writing for PAN.  I see this organization as one that works hard to find facts and promote positive actions that will balance the playing field for people who struggle in the current agricultural system.  PAN is much bigger than this, I assure you, but my role is to focus on Iowa and some of the issues related to pesticides, alternatives to corporate farming and support for the true family farms that work to be skillful stewards of their farms.  PAN's role is to help lift up people who are pushed down by existing systems - both corporate and governmental.  It is a global organization that originally concerned itself with the inequities between the northern and southern hemispheres, especially with respect to the passing of chemicals that were banned in the north, but then exported to the south (among other things).  I work for the North America branch (PANNA) and am specifically the Communications Associate for Iowa. 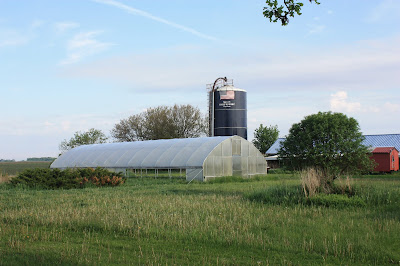 If I Had A Hammer, I Would Want More Tools in My Toolbox

The idyllic picture of the traditional farm in the United States often features the sun coming up over a big red barn. A rooster crows in the background and a few cows walk their path to the pasture. There are all sorts of green in different shades and forms, implying a variety of healthy crops. Perhaps there is a hay bale or an old tractor in that picture as well. And the farmer, if visible at all, might be wearing a broad-brimmed hat, hiding their face from the sun and from your view.

While this portrayal no longer reflects the reality of most farms in the U. S., I believe that it still holds some basic truths about the value of a healthy farm. One of those basic truths is that diversity is a key to a self-sustaining and successful operation. There is evidence of a healthy crop rotation and the integration of livestock and wild edges on this farm. And the farmer, when visible, still wears a hat with their face often hidden from your view.

A farmer is at their best when the toolbox is full of options at their disposal to handle the uncertainties of farming. My own small farm utilizes cover crops, crop rotation, natural habitat strips, cultivation, intercropping, succession planting, water drainage swales, mulches, and integration of livestock for fertility. Row crop farmers in Iowa could certainly use each of these tools to their advantage as well — and some of them do, and have done it well for generations.

My concern is that we are allowing corporate interests the power to limit the choices of skilled farmers everywhere, making it that much harder for us to succeed. Agricultural technology development has been centered around insecticides, herbicides, and fungicides in recent decades, and our institutions and regulatory structures have supported this technology. Even the genetically engineered (GE) seeds being developed are primarily concerned with traits that are tolerant to multiple herbicides.

This absurd focus on only one farming technique is equivalent to filling your home toolset with nothing but different hammers.

The pesticide-first paradigm takes options away from farmers who would rather have the choice to use different approaches. Soybean farmers find themselves deciding to plant dicamba-ready GE seed "defensively" to avoid damage from chemical trespass even if they do not intend to use dicamba themselves. A farmer that might like to add a small grain or alfalfa to a rotation may find that they inadvertently re-activate residual chemicals in the soil when they add phosphate fertilizer prior to planting. Farmers who would like to use cover crops as a part of a soil health program may find that herbicide residuals from persistent use over time could inhibit germination of those cover crops.

Is it any wonder that at a time when commodity prices are low and farmers are struggling to make ends meet, many of our most skilled farmers are deciding to rent their land out to larger, corporate entities and hire themselves out as operators? Our institutions and regulatory structures favor larger, inflexible farming systems centered around one tool (pesticides), while punishing those who would like to use a broader set of tools on a wider range of crops.

In the meantime, the face hidden under the hat of our farmer is aging; our institutions and regulatory structures support continued farm consolidation, impeding new farmers from joining the ranks of those in the profession. If a person is not privileged enough to be a part of a transition plan with an existing farm, one of the limited paths of entry is to grow alternative crops on a smaller acreage.

Sadly, farms like mine find themselves struggling to keep growing food and raising crops due to the difficulties posed by pesticide drift and misapplication. Beginning farmers who do have access to land and infrastructure find themselves in the same untenable situation our skilled, experienced farmers are in. But, they’re trying to succeed without the wisdom of experience. We’re all farming on a landscape that promotes the use of only one tool — a hammer — and discourages the use of the others.

And when you only have a hammer, everything looks like a nail.

What can we do about it?

We have multiple opportunities to influence decision-makers and to direct policy that will support the broader use of tools in the farmer’s toolbox. Each of us has the right to contact our elected officials and tell them what we think and encourage them to make changes that will address these problems.

We can ask questions of and make statements to those who seek office. In Iowa, we can vote in the primaries on June 2 so we can influence who challenges for these positions. In November, we can vote again to select those we feel are most likely to listen and act as we need them to.
Let’s put farmers and workers back on those diverse, healthy farms. And maybe, just maybe, when you look under the brim of that hat, you’ll see the tiniest bit of a smile.