Meanwhile, Back at the Farm...

I am upset and worried.  Maybe more accurately - I am disappointed and grieving.  And I think it would be inappropriate for me not to recognize that fact and say it out loud.  Why?  Because those few who read this blog frequently will likely sense that there is more than pictures of iris floating around in my head.  If I write without acknowledgement of the elephant in the room, then nothing will feel credible.  So, let's get to it, shall we?

Throughout my life I have found that I have little tolerance for those who have power and resources but apparently are unwilling to hold themselves to the highest standards - for they have the raw materials at their disposal to do so.  With privilege and power come responsibility.  Part of that responsibility is to lift up those for whom the playing field is not level.  In fact, it would be great if we could bring in some loads of dirt and level the grounds.  And, instead I am seeing abdication of that charge by many who should know better and should act better.  I have seen more evidence of bullying of all sorts at all levels in the past four years.

So, what can I do about it?
Well, for one, I can do a little writing.
And for two, I can recognize things to bring balance so that perhaps I can be effective when moments come that I might be able to make even more of a difference.
Which means (number 3) I can do my best to be a good steward of the Genuine Faux Farm, while being alert to opportunities to make more of a difference elsewhere.

So, let me take you back to the farm for a few minutes.  If you are hurting too - maybe this will give you a little solace.  If you are angry, maybe you can balance it with some compassion. 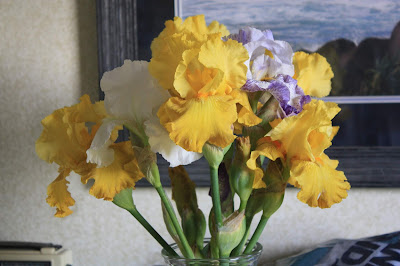 The iris on the farm just started blooming in the past couple of days.  You know it is iris season when the hot winds blow and knock a bunch of the tall stems down on the farm.  That means we go out and grab them the next day and put them in vases.  They never last long enough, in my opinion.  But, perhaps that is part of the reason why Tammy and I value them so much.

It's not just the colors and the shape - it's the fragrance that usually comes along with them.  Certainly the German Bearded Iris is an audacious flower (sorry, I am enjoying playing with my vocabu... vocabu....  my words today).  It's big, bold and probably not all that great for most pollinators on our farm.  The pollinaotrs much prefer the lilacs, silky asters, dandelions and highbush cranberry flowers right now.  But, they make us smile and think kind thoughts.  They remind us to stop and view nature - and recognize what it does for us. 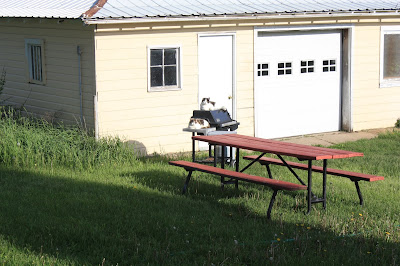 The Supervisory Crew on the farm have liked the fact that we have departed the farm much less this Spring than we normally do.  What they do not appreciate is those odd days when the two of us decide we aren't getting up as quick as we usually do.  On one such day, I opened the door of the house to find the outdoor supervisors (Inspector and Soup) both on the grill.... intently watching the house.

Did I feel at least a little bit guilty?  Um.  Well.  No.  But, I suspect I should have.  Poor starving critters!

Actually, they are both pretty good about it.  The Inspector might be the most good-natured cat we have ever had on the farm.  Concerns kind of roll right off of him and after he gets to know a person he treats them just like anyone else.  As in, if he knows you, then you are someone who should give him a skritch.  We are ALL made for the purpose of giving Inspector a skritch as far as he's concerned. 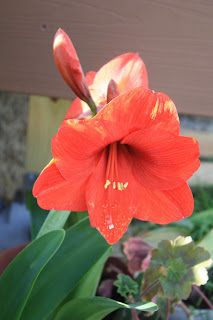 We accumulated some amaryllis over the years.   Most people might recognize them as a popular bulb to force in the winter months to provide some big, beautiful blooms.  I suspect most people toss the bulbs once they are done.  We don't, and we have let them cycle to a more normal process of growing in the summer.  Sometimes, we're able to both grow them in the summer and then force them during the cold months.

The pollen all over the petals of this one might give you a hint about the wind we've been having out here. 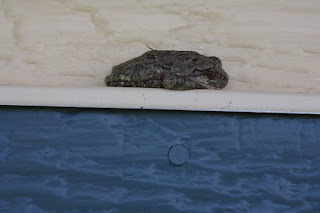 We've been grumpy about excess rain and water on the farm, but the frogs have been pretty happy about it all.  In fact, our frog population has taken a jump in recent seasons.  Oh.. .did I say that?  Dear me, a pun in THIS blog?  Who dares to be surprised by that?

In any event, we wonder if we are seeing more frogs ON our house than prior years because the siding is a light color or if it is because it is siding they can cling to more easily?  I tried to ask this guy, but he didn't want to talk.

Today, we found a Green Tree Frog on the side of Valhalla.  I had to roll down the side and it was not in a good place for that.  So, I had Tammy come over and pick it up before I finished rolling it down.  Tammy passed the frog to me because.  Well.  It's COOL to hold a tree frog for a second or to.  They are neat little creatures.

I tried to put him back in roughly the same location we had removed him now that it was safe and this frog wanted nothing to do with it.  In fact, it settled on my hand - taking the same pose as the frog above.  We had chores to do, so I had to be a bit more insistent after a bit, even if it was still really neat to have a relaxed tree frog in my hand.  After trying one more time to get it to walk off my hand, it decided it had enough and jumped... onto my shoulder.  After that, it jumped into the ditch by the high tunnel.

Oddly enough, I was actually HAPPY after that encounter, and so was Tammy.  Neither of us is certain we should speak for the frog on this matter.
Posted by Rob Faux at 5:30 AM