If you are one of those who have read this blog for a while, you will recognize that I tend to balance what I say as much as I am able.  I prefer to be as thoughtful as I can and I do my best to show respect for others as I put things down for some few others to read.  I realize my understanding is imperfect, so I try not allow my opinions to become fully entrenched - preferring to continue to improve my understanding so I can better represent myself and the things I choose to say something about.  And I still feel like I fail at least as much as I succeed in my efforts - but I hope I am setting a high bar to leap over.

Like so many other people - I have been struggling of late.  I am upset that so many people are 'content' to repeat the same tired (and unfounded) arguments on so many things, without actually exploring the worlds of fact, logic and empathy.  We're drawn to the 'fantastical and dramatic' explanations by 'self-important self-promoters' who make their noises for the attention rather than the intention.  And, it seems we are so quick to draw lines in the sand and choose sides.

We struggle because of the echo chambers we all put ourselves into. 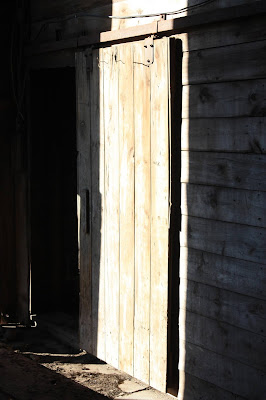 I pull the door open on its slides, revealing a dark room that smells of old hay and dirt.  The door rolls shut behind me and I am alone.  When I speak, I hear only myself or things that sound like me.  There are whispers that encourage me to be my worst self.  I don't know if these voices actually come from me or if there is something else in this echo chamber of a room that is trying to break me down into something I do not want to be.  Or maybe I do want to be that thing - and the thought shames me.

"If they don't agree with you, they are stupid."  says one voice.

"They're out to get you and they will ruin it all." says another.

"They have betrayed you and they will not listen, just give up." rasps a third voice that still sounds too much like me.

"Tell me again what you believe, because you certainly have it right!" says another.

"There's no reason to double check that.  It agrees with what you believe, so it must be true."  "You can't trust them, they don't see things the same way you do."

"They are taking the people you love away from you."  "It's better if you just cut ties before they drag you down with them."  "It doesn't matter if they suffer, they deserve it."  "They attacked you, defend yourself!"

"There is evil afoot but we'll stand with you."

Then it dawns on me that the door is still right behind me.  And, I open it.  And the light floods in.

I close the door.  And I walk away.

Then I shake your hand and listen to your story and find the humanity, the flaws, and truth in it.  And I hope you will also listen to mine and find the flaws and the truths.  Perhaps we'll find a better idea that is a combination of our understandings.

And, maybe we'll identify the evil that was afoot...  after all, it was telling us all about itself in that echo chamber.

Email ThisBlogThis!Share to TwitterShare to FacebookShare to Pinterest
Labels: Covid19, gentle reminders, I AM a protester, winter blues