Welcome to this week's edition of Postal History Sunday!  The blog post where you check in your worries for a time and learn something new and hopefully - interesting.  Remember, if you wish to see one of the images in a larger format, you can click on the image. 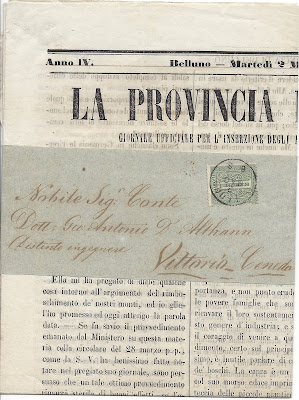 I realize that newspapers and magazines no longer hold the same prominence in our culture as they did even a decade ago, but in the 1860s and 1870s, periodicals and required substantial attention from the postal services around the world to get these items from the printer to their various destinations.

While letter mail was typically the first thing addressed in postal agreements between countries, they could not escape the fact that newspapers and other printed documents required a different type of handling.  You certainly don't have to read the blurb shown above.  It's just a sample of text from the 1867 convention between the United States and the United Kingdom that mentions newspapers and other "printed matter."  I offer it only as proof that this kind of mailed matter got its own treatment! 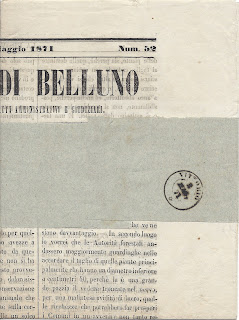 Remember - you are reading a blog written by a postal historian who enjoys collecting these things - so he just might write a blog simply because he found something he likes!  (oh no!)  You see, I have been aware of the existence of mailed newspapers from the 1860s in the collector's market for some time.  But, normally, the nice looking items have prices that exceed my budget... and the things that are a price I can willing to pay?  Let's just say I can smell the must and mold through the computer screen most of the time.  No thank you.

Well apparently, there are more examples of Italian printed matter than the market will bear, or I just happened upon a person who was happy to sell at a lower price - so I was able to pick up a few things that illustrate the mailing of newspapers and printed matter.  How cool is that?

You have now been able to view the Belluno, Italy newspaper of March 2, 1871.  It almost looks as if it was never removed from the wrapper band that was used to keep it all together as it went through the mail.  I suppose I could gently remove it to view the rest and then work carefully to put it back in the wrapper....  but, maybe not.  I'm pretty happy with it the way it is.  That, and, well, the news probably is a bit dated.

This newspaper I show above cost only 1 centesimi to mail to Vittorio, Italy, and maybe it cost less than that!  Wait... what? 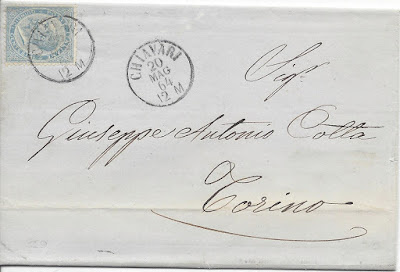 Let me back up for a second so you can see the whole picture.  Above is a piece of letter mail.  It cost 15 centesimi to send from Chiavari, Italy to Torino, Italy.  The envelope is a personal or business correspondence and it weighed no more than 10 grams.

Letter mail provided great flexibility.  You could mail one item and you could seal it up, placing whatever you wanted (within reason) inside the envelope or folded letter - as long as it was flat.  The only reason the postal service might open the letter is if they couldn't find the addressee and it went to the Dead Letter Office to be processed.

You could include a picture, an invoice, paper money, a newspaper clipping, a lock of hair and even, perhaps, the letter you got from Aunt Mable so your cousin could read it too. 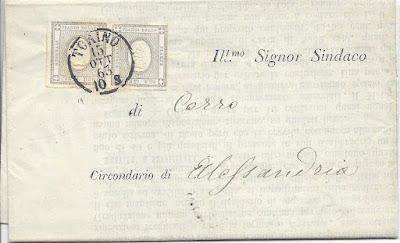 Printed matter mail, on the other hand, could not be sealed up.  It had to allow the postal workers to be able to check contents to be sure there weren't personal messages or other non-permitted material being snuck in with the mailing!  The item above was mailed from Torino to Allessandria (both in Italy) for 2 centesimi for items weighing up to 40 grams.

Ok - I think we see an advantage for the printed matter folks to send their newspapers, magazines and advertising!  But, it only makes sense.  People were used to paying, perhaps 5 to 10 centesimi for a single copy of a newspaper at a newstand.  Even if you could pass your costs on to the customer, it was unlikely that readers would pay that much more for the privilege of mailing it to their home address. 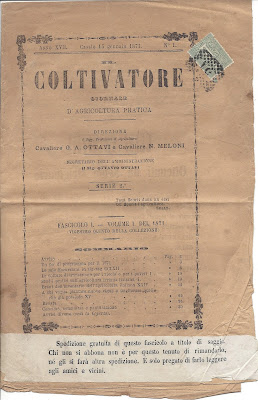 The next item is a sample Farmers' Journal of Agricultural Practices in Italy.  The white band at the bottom essentially indicates that this sample is being provided 'gratis' and that the recipient should not delay in sending in for a subscription!  At top right is a 1 centesimi stamp that is paying for the mailing of this item from Casale Monferrato.  Sadly, the "where it was sent to" portion has been lost.  But, it is safe to say it stayed in Italy - and likely landed somewhere in northern Italy.

There was a 'concessionary' rate that provided a discount for newspapers and magazines that pre-sorted their bulk mailing by the destination and the route the items were to take to get to that destination.  In fact, some bulk mailers paid even less than one cent per item if they were regular customers.  A weekly newspaper got a better rate than a monthly magazine, for example.  The thing is, there weren't stamps with denominations for all of these fractions of a centesimi - so they just used the 1 centesimi stamp and the bulk mailer simply paid the bill at the agreed upon rate.  In some cases, the stamps were adhered to the newspaper before printing and you can find examples where the printing goes OVER the stamp.

If you think about it, this makes a great deal of sense for the post offices as well.  They can count on consistent business rather than the whims of those who send a single letter at a time.  A pre-bundled batch of newspapers to go from Belluno to Vittorio required about as much handling as a single letter from Belluno to Vittorio - until you got to the delivery part.  And, yes, they typically weighed more. 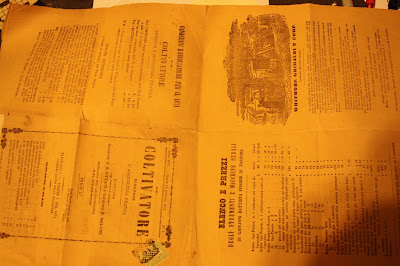 When I unfolded the Farmers' Journal item, I found it was a larger piece of paper that was printed as four separate pages on each side.  Other than the title page, it was all advertising for agricultural implements, plant stock and other items.  At a guess, the actual sample of the journal had been wrapped inside this covering and is no longer part of the whole.

Perhaps someday I will find an actual copy of this Farmers' Journal of Agricultural Practices.  Then, I'll brush up my Italian - and learn something new!

I hope everyone has a wonderful day and thank you for joining me on Postal History Sunday.