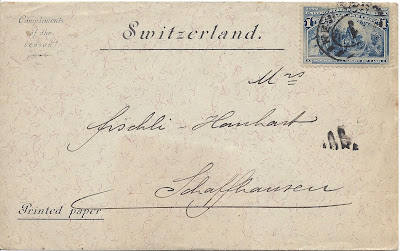 It is Sunday and we're going to do a different sort of looking back by looking at some postal history.  This one will be a bit different because we're actually looking at some of what you might consider to be 'Junk Mail!'  Yes, postal services around the world have provided discount services to bulk mailers for quite some time.  And, yes, postal historians do actually collect some of that stuff!

The item above was some sort of printed matter that was sent to Switzerland in the 1890s.  At a guess, it probably held some sort of advertising papers that had a Christmas theme (note the "Compliments of the season" printed at top left).  To qualify for the reduced rate at the time, envelopes had to be sent unsealed so the postal clerks could inspect the contents to be sure that the sender was not trying to sneak personal correspondence or other unqualified material along for the ride.

This item, again from the 1890s (shown above) actually illustrates another way a mailer could accomplish making contents available for inspection.  This is called a 'wrapper,' which was simply a wide strip of paper that was glued together on one end to make a tube.  Typically, the contents would stick out of either end (at the right or left of this piece).  Often, newspapers were sent with a wrapper to keep the newspaper together.

And yes, mailing newspapers used to be a thing.  Actually, it used to be a very big thing.  Postal treaties between countries in the 1850s and 1860s typically included whole sections on how newspapers would be handled. 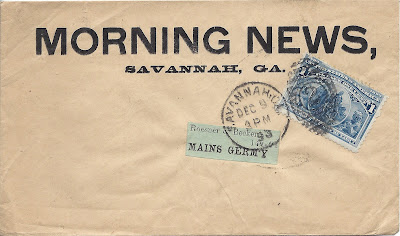 It is hard to find examples of printed matter from earlier years because the content was not typically of a personal nature - and most people saw no reason to hold on to it.  A newspaper was read and then discarded or used in a bird cage as a liner.  The wrappers or envelopes carrying these items had a slim chance of being saved.  But, finding something with both the content AND the wrapper/envelope?  That can be even more difficult - especially if you prefer material before 1900!

The Morning News item above was mailed in 1893 from Georgia to Germany and it does not have any content either.  But, what it does show is that 'mass mailing' short cuts were already in use at the time.  Preprinted labels for mailing addresses, for example!  And, apparently, the Morning News from Savannah, Georgia was willing to spend the money to have pre-printed wrappers or envelopes for their materials. 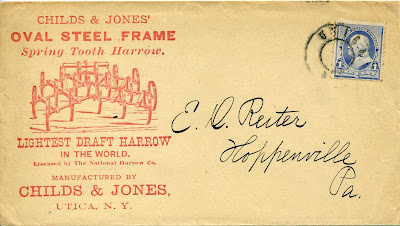 Here is an example of something from the late 1800s to early 1900s that DOES have contents.  The contents include multiple sheets highlighting the implements being offered by Childs & Jones.  While we do not have a spring tooth harrow at our farm, we certainly considered one. 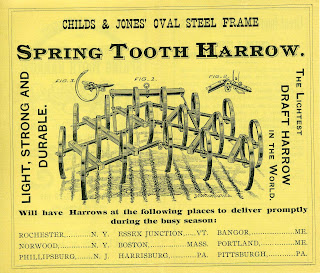 It might be a little easier to understand how something might still have the contents if the recipient was potentially interested in a product.  They might hold on to the envelope and the contents figuring they could reference it later on should they decide to make a purchase.  It goes into a pile of papers or a file.  Then one day, it all gets cleaned up by a person who realizes someone might be interested in collecting it.... or... not - and it goes into a dumpster or burn barrel.

And that's why it can be hard to find these things.  Don't get me wrong, there are plenty of them out there for collectors to enjoy.  But, consider how many of these were probably mailed and what a tiny percentage of them most likely survive to this day!

And there you have it!  A postal history post that might have something new for you to learn today.  I hope you all have a great week!