Not Going to Happen 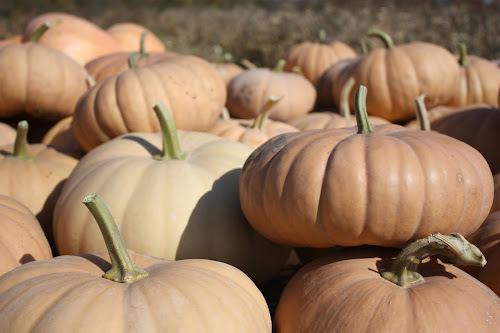 Other than the fact that we had a problem with a plane spraying half of our farm, 2012 was a pretty good growing year for us.  Not all that surprising to me is the fact that 2012 was also the last time we had drought conditions in our area.  Our farm's soil and layout is such that we can do better in a drier year than a wetter year.  Though I admit it would be best if we got some nice soaking rains now and again.

I mentioned 2012 mostly because the photo you see at the top of this post is from that year.  We harvested over 100 of these beautiful Long Island Cheese pumpkins that year.  We harvested over 1000 pounds of green beans and over 800 pounds of lettuce.  All in all, we had a pretty good year if you remove the crops that were destroyed by spray from consideration.  For that matter, even the crops we had to destroy did pretty darned well (much to our chagrin).

Here we are in the year 2020.  Tammy and I made some important decisions that we would be reducing production this year for all sorts of reasons.   Then, Rob took a job with Pesticide Action Network, a pandemic happened and we had no one working on the farm with us.  That's a really quick way to reduce your capacity for vegetable production and sales.

We have, thus far, managed to maintain the same level of meat poultry production (one more week for the broilers!) and we still have plenty of laying hens - including a new flock for the coming seasons.  But, there won't be pictures like the one above this year.  There likely will not be a "Veggie Varieties of the Year" post either.  Although - it is tradition, maybe I'll find a way to muddle through it this year. 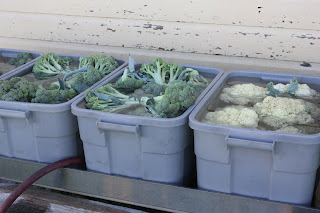 The point is this - we have grown used to harvesting tons of produce (literally) each and every season since we started.  This year, I suspect we'll have maybe a dozen pumpkins (for example).  We'll probably have far more peppers than we (or anyone we sell to) will need.  I just have no reason to put out a crop report like I have so many other times - whether people actually cared or not!

Do me a favor and go look at that crop report post.  Look at some of those numbers we set for goals on a regular basis.  And then you'll get an idea of why I might be feeling a bit lost this September.

Part of me is relieved.  Working that hard and trying to push to grow, harvest, clean, pack and deliver that much produce multiple times a week can be stressful and tiring.  This year, we have simply grown what we are able to - and if something doesn't happen - it doesn't happen.  Now, I am realizing we won't have any broccoli or cauliflower this year.  Normally, we would plant two to three successions of those crops with the understanding that you will miss your timing at least once and lose a succession.  We planted one succession this year - and missed the timing. 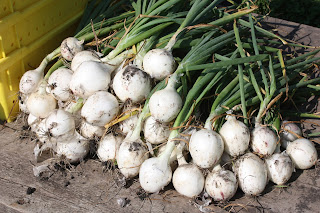 We never did find a window of workable soil that combined with available time to plant onions.

It was all about not dedicating the same amount of time (and of ourselves) to growing produce.  And I miss seeing the fruits (again literally) of those labors.  I miss being able to say that we harvested 5900 cucumbers or 790 pounds of broccoli.

We still have peppers, tomatoes, eggplant, winter squash, beets, carrots and some other things that are still plugging along at the farm.  There are still 1500 or so garlic hanging up in the truck barn as we speak and a couple hundred pounds of potatoes.  It's just that it isn't what it was - and we're trying to figure out where we go from this point.  But, that is a set of questions we will address as we progress through the Fall months, with final decisions happening in December.  For now, all we can say is that the pictures of the tremendous bounty of produce from the Genuine Faux Farm this Fall are not going to happen.

Maybe we'll get some late crops into the high tunnels and surprise ourselves a bit, maybe we won't.  It's not the same as it was.  And maybe that's ok.  And perhaps that is the way it is supposed to be.

I wonder how we will re-invent ourselves in 2021?

Email ThisBlogThis!Share to TwitterShare to FacebookShare to Pinterest
Labels: before and after, Foresight 2020