What Yield Data Can Do For You

A few years ago an idea was floated around the Practical Farmers of Iowa Cooperators Meeting within the horticulture group.  Without obscuring the point of this blog with too much detail, suffice it to say that growers and PFI staff recognized that it is NOT easy to get reliable yield numbers for all of the varieties and crops that exist.  This is even more true if you want numbers specific to the state of Iowa.  You could go to resources such as Knott's Handbook for Vegetable Growers to get some ideas about what you should expect to produce for a given hort crop.  But, the numbers there are general guidelines and may not be as useful depending on scale and location. 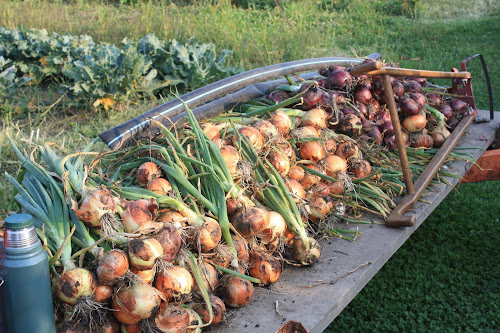 PFI has created a Yield Data Collection Site that is fairly simple to use and has the potential to be a useful tool for hort growers in the state.

If you collect yield information and have records for planting and harvest dates.  If you can calculate the square footage dedicated for a given crop.  If you can answer some simple questions regarding your growing culture - direct seed, transplant, irrigation, under cover, etc.  Then your data could be a part of a useful aggregate that we all can use.

Start With One Crop Type

If you are interested in adding data, I strongly encourage you to do so.  And, if you do, concentrate on one crop first to get used to the tool.

In our case, we had onion yield data readily available for a few recent years.  I simply entered the data for one variety for one of those years, made sure to save it and THEN I used the 'clone crop' function to create a new copy.  I then edited the new crop with the data for another variety for the same year or for another year's results of the same variety.

Take a Moment and See What You Can Learn

Once I had three year's worth of data, for a total of 13 crops, I decided I wanted to learn what I could from my data AND the data provided by other growers in the state.

I did a search by crop - in this case - onions.  And I found that there were 48 records in the data base for onions at this time.  Entries came from various parts of the state and included records for growers with small production amounts as well as larger production amounts.  As I reviewed the data, I would say that we were a 'moderate sized' onion grower for those that had shared yield data.  However, I could see that we had the ability, with changes to how we do things, to scale up to onion planting areas that were as big or bigger than other farms that had reported using this tool.  This tells me that there are some potential models of comparison in the data should I wish to go that way.

I was curious what would happen if I wanted to look at a specific variety, so I chose the White Wing variety that we like on our farm. 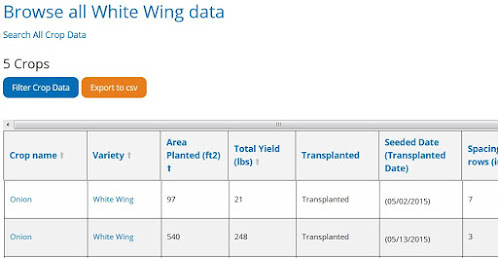 I found five entries for White Wing.  Most of those were entries for our crops, so it was clear that I wasn't going to learn a whole lot more than I already knew at this point.  But, this illustrates the reason why it would be better if more growers entered their yield data into the site.  The data points are not excessive and the clone crop function reduces the effort significantly.  Did you raise White Wing onions?  Add some data so I can learn more!  Ok... add some data so you can learn more too!

The "export CSV" is an easy to use function that allows you to download the data to a spreadsheet so you can do some comparisons and do any of your own calculations you might like to try.   A snapshot of the data I received when I downloaded the CSV file for White Wing is below.

The data includes information on crop spacing, growing zone, irrigation, plant and harvest dates.  If you happen to see differences in the data from entry to entry, it is possible you might glean some of the reason for those differences based on the cultural information found there.

I downloaded the CSV for all of the onions.  I then focused on the red onions to see what I could learn.

The three entries at the bottom come from our farm.

The first thing that jumps out at you would be our harvest for 2018.  Over 1 pound per square foot is a ridiculous number.  But, as far as that year was concerned for our red onions - it WAS a ridiculously good year.  So, we can take that as an example of what might happen if the planets align and everything goes right.  We clearly cannot expect that on a yearly basis.

On the other hand, it seems that numbers from .42 to .69 pounds per square foot are not out of the question in Iowa for red onions.  Based on this information, I might say that a half pound per square foot would be a reasonable goal for a grower in the state.  But, of course, the data set is still small, so you have to be careful about what you conclude.

Other information that might be of use to a grower includes the harvest date range.  You might notice that our harvest dates (again the last 3 entries) are significantly later than other growers.  By the same token, if you were to look at the planting dates, you might also notice that we are slower to get things in the ground as well.  What this data does is give a grower reasonable date ranges to work with and still be able to expect a crop.

You might also notice that the harvest date ranges are small - with a start and end date typically being one or two days apart.  This is no surprise to most growers as they typically harvest all red 'storage' onions at the same time.  Wider harvest ranges indicate crops (like tomatoes, peppers and beans) that are harvested more than once.  In that case, you might get an idea as to what a reasonable harvest window might be.

Take A Moment, Enter A Crop on a Rainy Day

So folks - since Iowa needs rain and some appears to be on the way - use a rainy day to enter some horticulture crop data into this useful tool.  If we can all manage to do a bit of this here and there, we will benefit in the long run.  We will listen to our own recommendation and enter ten entries for green bean data next.

And, before you think I don't understand that this sort of thing can take time - and time is often in short supply for diversified growers - let me assure you that I rarely can get everything done that I think is worth doing.  Despite being a backer of this project for some time, I STILL have trouble finding time to do this.  So, I get it.  And I still say we should all take the time and participate.  Enter one crop for one year today.  Do another one next week.  And one more the week after that.  It's amazing how much can happen with a slow, steady commitment to the process.

But, it only works well if we participate.