We are drawn to the simple answers for a very specific reason, I suspect.

Because - once we accept a simple answer, we can stop thinking.  And, thinking is a dangerous pastime!

Unfortunately, accepting a simple answer and putting a halt on your thinking is, in my opinion, even worse.

Think.  Question.  Ask.  Accept that very little in this world is easy and most everything is complex.

And it can be stinkin' hard to do.

So, do it anyway. 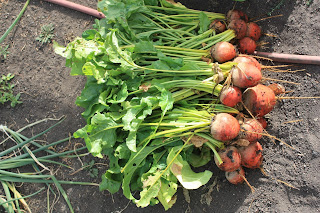 I am going to bet you all thought I was going to go off on some highly philosophical or current event tangent after all of that.  You weren't?  Oh.  Now I am not sure you're telling the truth, but that doesn't really matter.  What matters is the point that I am trying to make.

We like to take simple either/or decisions and make them a part of our identity.  Oh... oops.  That is kind of philosophical.

So, about those beets...

Beets are one of those vegetables that we have identified as being one of the most polarizing among the persons who have patronized our farm over the years.  Some people just LOVE their beets and others look at us like we are offering to poison them when we offer beets.  Kale and eggplant rank right up there with beets - but we're not talking about them now, are we?

I was once a hater of beets.  Beets?  NO thank you.  Did not even want to look at them.

Then, I started farming - and some people wanted beets with their CSA.

Well, I guess I can grow them.

And, maybe it would be cool to try some different varieties...

And then people asked how they tasted.  Uh oh.

The point is this.  There are many, many different varieties of beets.  There are golden beets, striped beets, red beets, white beets, beets for beet greens, cylindrical beets, round beets, etc etc.  Beets have a range of tastes and textures.  Yes - they are all still beets - so they do have similarities.  But, there really is quite a diverse range for different palates.

And, you can prepare beets so many ways.  You can boil them, grill them, roast them and pickle them.  You can mix them with other ingredients or you can just put a little butter on them.  You can cook them so they are really soft or make it so they have a little crunch.  Once again - still beets.  Once again - a surprisingly wide range of tastes and textures for different palates.

It turns out, I like beets most of the time.  I prefer the golden beets over the other types.  I like them roasted or steamed and a little real butter melting on top.  But, I've found that I'm just fine if red beets are prepared in these fashions.  In fact, I'll tolerate cooked beets in most forms now.  But, there are still times I do not like them.

This did not happen overnight.  First, I had to be willing to learn more about beets.  Then, it took a while to explore the world of beets and learn about it in my own time.

After that, it took me awhile to get over my own, self-applied label that I am a person who 'doesn't like beets.'  I had to admit that I might be wrong and that this label doesn't apply to me.  I even had to face up to the fact that some folks who know that I am a self-described 'beet hater' were surely either going to be disappointed in me or were going to take an inordinate amount of glee in my 'conversion.'

In the end, I discovered that the responses of others who felt I had to either love beets or hate them did not matter - because they haven't taken the time to know beets like I have.