Welcome to Sunday and a post that looks at a postal history item and gives everyone a glimpse into the hobby this farmer indulges himself in.  Needless to say, if this sort of thing begins to interest you more than the idle curiosity these blog posts might bring, feel free to let me know - there is always room for another person in the hobby.

But, if it is just neat to learn a new thing now and again and that is enough - you are also more than welcome!  Sit back and enjoy for the next few minutes (or however long it takes you to read). 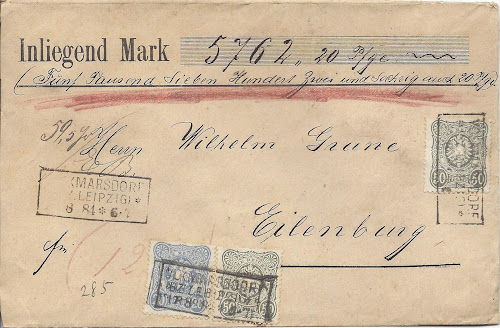 The item above is what is known as a "money letter."  I suspect every one of you can take a wild guess what that might mean based only on the name I have given it.  This particular envelope was sent in 1884 in Germany.

What if you wanted to pay someone a chunk of money for a service rendered and they weren't next door?  How would you do it?  Well, use the postal service!  Most postal services in the 1800s had procedures and fees developed (and well tested) for sending cash in the mail.  These processes might differ somewhat from country to country, but there was was one constant - if you wanted any insurance to protect against loss, then you had to pay more in postage.  And, if you wanted that protection, there had to be a system that tracked how much was in the envelope!

This piece shows some fairly simple processes to track and protect the enclosed money.

At the top of the envelope (on the front) the amount of money enclosed is written (5762 marks and 20 pfennige).  Under that, the amount is written out in words (funf tausend, etc...)  This serves as a way to confirm to the recipient how much was reported to be in the envelope.  The postal service also maintained separate records if they were providing some form of coverage for the event of a loss. 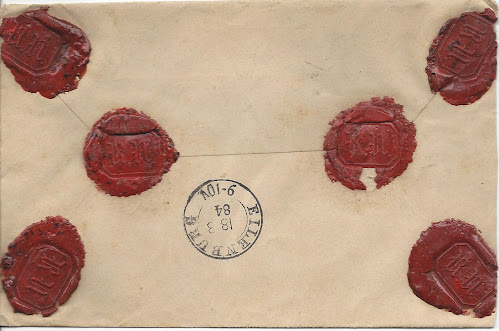 At this point in time in Europe, it was also fairly common to find the envelopes sealed multiple times in wax (usually red or black).   If all went well, the recipient should find that none of the wax seals had been broken prior to delivery and the amount written on the outside of the envelope would match the amount of money inside. 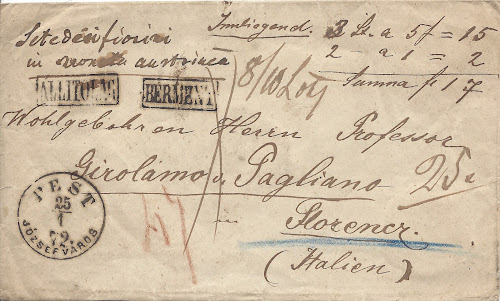 And, here is another money letter sent from Hungary to Italy in 1872.

So, you may be wondering - did the postal clerk SEE the amount put in the envelope?  It sure seems like it would be easy to claim one amount, put in less, and then blame the postal service for losing some of the money. 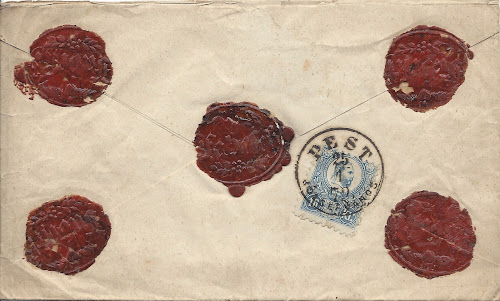 Oh look!  It is also sealed with wax!  But, for good measure, the postage stamp was also placed across one of the locations where the envelope was sealed together.  Using the postage on a back of an envelope to help seal the item was also a method used to protect against someone opening the item before it got to its destination.  But, the placement of the postage stamp on the back had other significance in some countries. 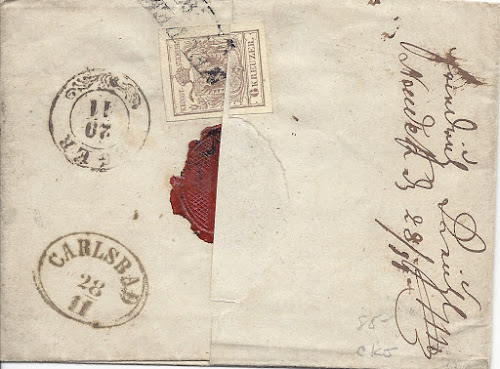 Not every item was sent in an envelope and not every item was opened as neatly as the prior two!  The letter shown above is known as a folded letter.  The person took a sheet (or two) of paper and folded them over themselves until they were a reasonable size.  They then used wax AND a postage stamp to seal it shut for mailing.

Someone used a sharp object to open  the letter, neatly cutting the stamp into two pieces.  The wax seal, on the other hand, was cut, but the paper tore, taking some of the seal with it. 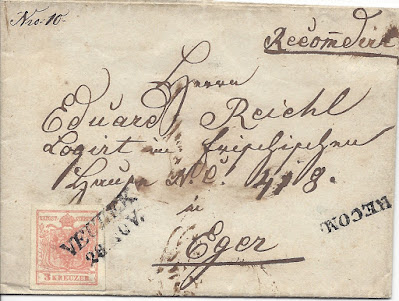 Here is the front of this item (from Austria in the 1860s).  It also has a postage stamp.  This stamp paid the letter postage.  The one on the back, that was cut into two?  That one paid for the registration fees.  Austria's postal system of the time required that the stamp for registration be on the reverse and the stamp to pay the regular mailing postage was supposed to be on the front. And now you know!

Thank you for letting me share.  Have a good day all!