Are We a Real Farm Now? - Look Back

This post was originally published on September 27, 2011.  I actually found this one somewhat amusing AND depressing.  Why?  Well, this particular hayrack represents one of our equipment success/failures.  We did a fine job building the deck, but we never did get the front wheels to turn left/right freely on this thing - which made it only moderately useful on a small farm where turning is actually an important feature for a trailer.  This running gear still sits on our farm.  The deck has some problems now and it still won't turn.  If someone wants to take a crack at it, we'll make a good deal for it!

Now that we have a deck on the running gear - making a functional (if not perfect) hay rack.... are we real now?

The running gear was picked up at a late summer auction.  It has a few problems - one of which is the simple fact that the tongue/front wheels will NOT turn.  That's the next task.

But, the lumber came from the old building that came down several years ago.  The lumber has been salvaged and some of it put to use here. 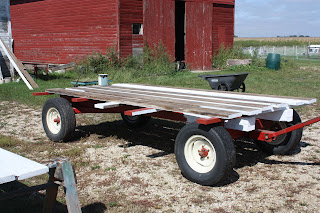 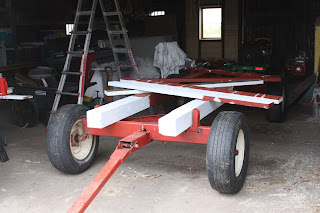 While we realize it isn't a fine piece of furniture.  Painting this thing *should* make it last longer.  We really don't want to pull it apart and replace boards any time soon. 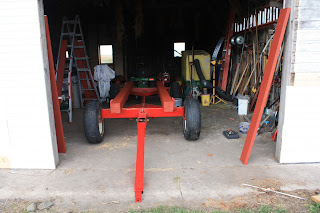 And it is always easier to paint lumber before it is assembled. 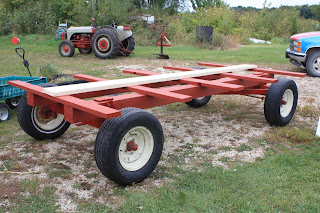 Ready to put the planking on the deck. 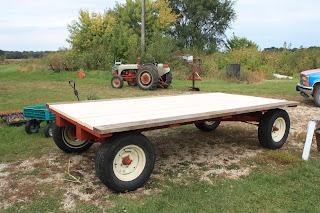 And...there it is. Okay - you might notice there are unpainted boards on the side.  That's the result of an error on two levels.  First, I selected a board for the deck that had a bit too much of a dogleg in it.  So, I have a painted plank with nowhere to go.  Second, I can't count.  An odd number of boards - you start with the center of the first board in the center of the crosspieces....  Even number is different, you start with an edge at the center point of a cross piece.

I know this.  Therefore, I must not be able to count. 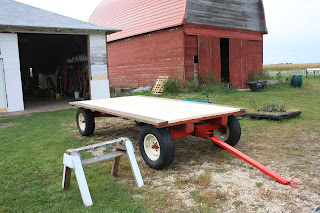 ================================
Back in the present again (2020).  I still see much value in the process that was this hayrack.  We learned, without too much money invested, how to inspect a running gear to determine if it will do what you want at an auction.  Yes, we learned the hard way.  But, we learned.  Since that time, other running gear have come to live on the farm and we have gotten much use out of them.
We also learned that we are perfectly capable of working on and repairing various farm equipment.  Up to this point, we had done little with "larger" items.  You might not recall (as I do) that we had just gotten our first category 1 sized tractor in 2010.  This was a bigger step for us than it might seem to everyone now.
Good job us!
The hardest thing to think about when I see this blog now is that I know what the deck on this hayrack looks like now.  I still remember putting that deck on like it was yesterday.  It is hard to believe that the deck is no longer in perfect repair.  Amazing how things change and time flies!

Email ThisBlogThis!Share to TwitterShare to FacebookShare to Pinterest
Labels: fix it faux, Look in the Mirror, mekanikle ineptitude, Throwback