Any hobby or specialty can seem... well, a bit ridiculous to those who do not already appreciate it.  Do you want to roll your eyes when your second cousin, twice removed, wants to tell you ALL of the details as to their plans for deer hunting this fall - right down to layout of the land around the deer-stand and the contents of the cooler full of food they will take with them?  Or maybe you have a friend who collects decorative plates and she proceeds to tell you why THIS plate is so much better than THAT plate?

Well, prepare to roll your eyes!

Ok.  Ok.  You can just not read this if you don't want to.  Much more freedom here.  And, I will also endeavor to keep it at least mildly interesting... 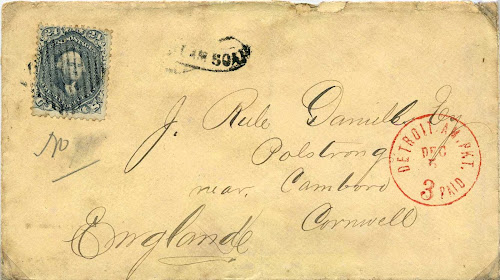 Here it is - an item that has been in my collection for a while that I think is REALLY cool.

Now, much of my primary collection consists of envelopes mailed in the 1860s from the United States to other countries.  These envelopes show the use of the 24 cent postage stamp to various destinations.  And, yes - there it is! A 24 cent stamp at the top left of the envelope.  Yay!

Now - an envelope sent to England using a 24 cent stamp at this time is NOT uncommon.  After all, it cost 24 cents to send a letter to England from the US.  So, you would be forgiven if you looked at this and said, "Yeah Rob.  Looks like ALL the other ones you've shown me <roll of eyes>."

You probably won't care that the stamp is a different color than most of this issue and you probably aren't going to be impressed with the Detroit marking at the right either.

What makes it fun is the marking just a bit to the left of center at the top.  If it were perfectly struck it would look like this.

This item becomes cool because there is a story that can be told when we see that one partial marking on the envelope.

The opening of the Erie Canal in 1825 ushered in the development of steamship services on the Great Lakes.  By the time we get to 1862, when this letter was mailed, there were numerous steam services that carried passengers and cargo from port to port, including cities like Detroit.  If you would like more information about the maritime history of the Great Lakes, the source linked here is packed with information.

Passengers on a steamboat could avail themselves of a service rendered by captains of such boats.  The captain could be given a properly paid letter to be mailed at the post office once the boat had landed.  This is not terribly unlike the service many hotels have provided to accept letters from their customers and pass them on to the mail carrier when the mail carrier arrives.

The ship's captain and the ship itself were NOT part of the US postal service, but they WERE entitled to compensation for their services at this time.  The captain (or his representative) would take the letters given to them by passengers to the post office (in this case, Detroit) and the post office would pay 2 cents per letter to the captain of the ship for this service.  The "Steamboat" marking would be put on each letter received, which told the destination US post office that they should collect 2 cents from the recipient to compensate the post office for money they paid the ship's captain.

In other words, the postage stamp for 24 cents did not cover the 2 cent fee, it only covered the postage needed to mail something from the US to England at the time.  The postal service was 'out' the 2 cents until the recipient of the letter paid the fee.

Now we have a problem.  This letter LEFT the US postal service and was delivered in England.  They weren't going to collect 2 cents and return it to the United States as they had nothing in their postal agreement to do so!  So, the postal service lost the 2 cents given to the captain for this letter.

You see, most of the old envelopes from this time period that show a 'steamboat' marking like this one were mailed to a US destination, not a foreign destination.  I just happened to be able to get an oddball that did not fit the mechanism to pay a ship's captain for a service.

And there you are - reasons for you to roll your eyes and for me to be happy.  What more could we ask for?