A week or so ago, we put a post out that was titled "Learn Something New" and I got some positive feedback that more of these were desired.  I certainly understand why!  If you are a curious soul, like I am, it can be quite enjoyable to dig into something and learn.  I will also admit that learning new things can be a comfort.  And, after the post just prior to this one, I think we all (those of us who write the blog and those who read it) could use a little comforting.

So - let us dive in to a little learning!

They are out in force!  The katydids and their family make up the lion's share of the soundscape each evening on the farm these days.  Yes, sure, there are crickets and there have been some cicadas.  An owl will occasionally make itself known as well.  We have been scaring up some Killdeer when we walk out to do the chores in the evening as well. 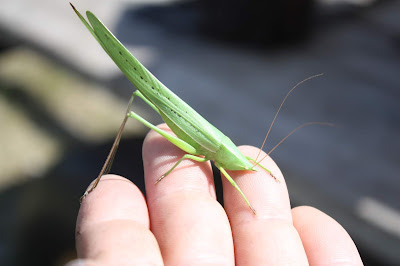 There is a 'click-click' type of noise that we associate with the katydid is an Oblong-winged Katydid - but we have not heard quite as many of those this year as we have in recent Summers.  Most of the noise is coming from critters known as the Slightly Musical Conehead.  But even that song is a bit less than it has been recently.  We also have a significant population of Nebraska Coneheads.  While we haven't laid eyes on them personally, their singing is pretty clear at night.  This also should not surprise us because Nebraska Coneheads use the strategy of dropping from their more  prominent perches in 'weedy patches' into the litter at the base of the plants when they are disturbed.  They make their escape from there. As you can see from the picture, the Slightly Musical Conehead can be found and held for the camera.

I've always thought the sound Round-Tipped Coneheads make was a cricket.  But, if you visit the link, you might understand the confusion.  I am still not certain I will be able to tell the difference between the two when I hear them, but it is interesting to know.  I am also pretty sure I won't be able to tell these and the Nebraska Coneheads apart if I should see them.  And, if I do see them, how should I greet them?  What is polite to a Conehead?  I'm not sure I'll ever know that.

There are around 200 different types of katydids (coneheads are katydids) in North America.  If you are interested in learning more, you can go here to learn more about their calls.

What Does it Mean to Be Certified Organic? 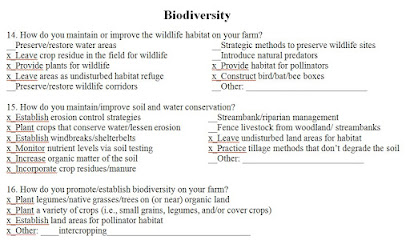 I took the liberty of taking a screen shot of one of the parts of our Organic System Plan for our farm that was submitted for review this past Winter.  The section I 'grabbed' for you all to see highlights the things our farm does to support biodiversity.  When we first started certifying, things were not put together in a checklist like this - instead, I provided text describing everything we were trying to do to promote diversity on our farm.

The National Organic Program includes guidance for all aspects of an organic operation, including guidance for natural resource and biodiversity conservation.  I need to stress that this is ONLY one part of being a certified organic operation.  But, I think it is an incredibly important part.

It would be natural for those who are not growers to assume these are all 'easy choices' to make.  But, the reality is that there is some conflict for each farm and every farmer when it comes to the actions taken (or not taken) on a given farm.

For example: "leave crop residue in the field for wildlife"

On the surface, this sounds like it isn't so hard to do.  And, in fact, it isn't.  But, it is never that simple, is it?  Some crops will have pathogens that can be stored in the residue and the soil.  Even if you do not grow that crop there the next year, those pathogens can be moved by wildlife, wind and water.   Sometimes the litter from a crop is a host for the very pest that gave that crop problems this season.  If you leave it in the field, you create a better environment for that pest to return.  In other words, there are always choices to be made for each succession of every crop.  Sometimes you leave the residue, sometimes you don't.

And, when you leave crop residue, it is highly likely you will leave some weeds behind as well.  This is where it comes in handy to know some things about weed seed predation by rodents and insects.  A healthy population of seed eating critters can reduce an easily accessible seed source by 7 to 22 percent during the growing season depending on conditions, type of seed and the population of interested seed eaters.  The trick, as we have learned too late over time, is to make sure that seed is available and not buried by fall tillage AND that there is sufficient cover for the seed eaters to want to be in place to predate on the seed.

And now you know more about why one single item on the Organic System Plan means so much more than the eight words and a checkmark. 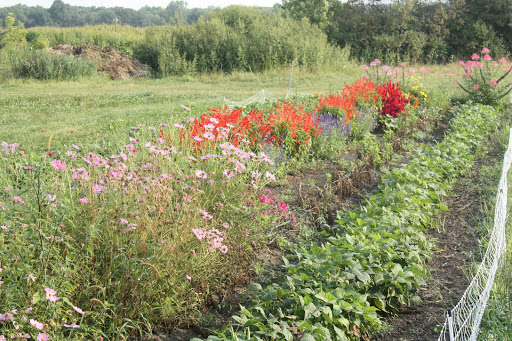 Is this type of Genuine Faux article to your liking?  Keep encouraging and you'll see more of them!