What's been missing with all of the posts we have put out on the Genuinely Faux blog this year?  The "Funny," that's what's been missing.  But, here's the thing.  Funny doesn't always just happen.  The funny posts people seem to enjoy the most are often pieces of writing that take more effort than it seems.

And what happens if the person who is doing the writing isn't feeling funny?    I mean, I am a Gloomy Gus most of the time anyway, moping around the farm, commiserating with the eggplant as their fruits assume a teardrop shape to show some empathy for how I am feeling. 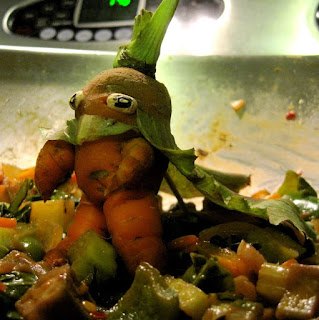 Um.  Actually, I am pretty certain eggplant fruits assume whatever shape they assume for other reasons than the farmer's state of mind.  And, that's not an eggplant up there.  So, let's move on, shall we?

You Often Have a Trigger

Either I have to find something that is inherently funny or I have to find the humor in something.  Tammy and I have numerous moments most days where we find something that is humorous together.  The problem is, I can't always remember these things so I can expand on them for a blog post.  Hey!  I don't live for this silly blog!  And, no, I don't need everything to be recorded.  Let me be silly on my own time, if you please.

Although, there are times when I grieve the loss of something that would have made for a great post.  But, sometimes, you find something with more permanence that allows you to go further with it.

Something like a Georgia gardener being raided by the police for growing... okra.

OSP What are those plants over there in the field? That's not marijuana is it?!?

OSP Well, how about those, are those marijuana?

Rob No, those are cabbages.

OSP Well, surely that over there is! 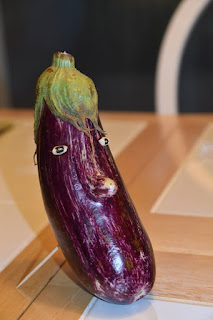 Or You Have to Have a Life That Differs From...

It actually takes less effort to be humorous if you live a life that is different from, well, most everyone else.  The simple act of describing some of what you do is enough to be entertaining by itself.  If you have a decent sense of humor regarding your own interests and occupation, then there is plenty of fodder for funny.  You also should consider using alliteration once in a while.

And, if you like to use different names for things...just because... then your personal vocabulary can be entertaining as well.

The Beak of Doom. There aren't many flies in the broiler area.  But, every once in a while there is a disturbance where many birds move quickly at once.  Flying insects do cause quite a stir in the flock.  Until they meet a beak of doom.

I am not certain how this got in there.  All I can say is that sometimes different lyrics for a song will float around in my head.  Sometimes, I chase those lyrics long enough to write it down and put it in a blog...

There's too many hens
Too many weeds, oh!
Making too many problems
And not enough gloves to go round
So you see...
This is a land of contusions. 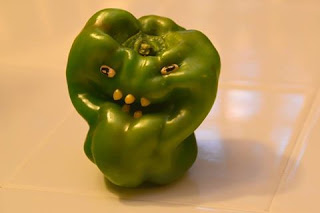 Our thanks to Sam Larimer for finding the faces in these veggies and sharing them with us a few years ago.  It's nice to get a little more mileage out of them!

Email ThisBlogThis!Share to TwitterShare to FacebookShare to Pinterest
Labels: general strangeness and minions, Look in the Mirror, time to have pun