We had just completed the vegetable and poultry drop-offs in Waverly at St Andrew's Church and Yogi Life and we still had a home delivery to make.  We prepared a bag with the veggies that were ordered and made sure we had the eggs ready to go.  Then, we packed up the tables, trays, coolers and remaining veggies so we could make the delivery.

As Tammy popped out of the truck to drop off the produce and eggs - and have a few moments of properly physically distanced chatting - I waited in the truck and happened to glance at the odometer. 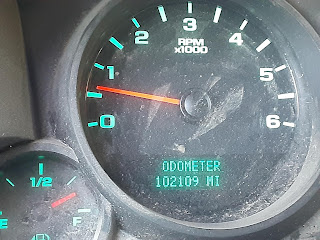 Chumley has been a very good truck for us and we still, oddly enough, think of him as a "new truck."  After all, we don't FEEL like we've had this truck all that long.  Never mind that when we purchased the truck, we had every intention of getting it to last at least as long as the last one (we had Grover for ten years after someone else had owned him for about the same period of time).

Then, I realized that this represents over 100,000 miles of farm activity (ok, there might be some miles on the truck that are not strictly farm, but I think we're pretty safe to say 95% of the miles on the truck were farm related - close enough for the blog -ok?).

Then, this song popped up on the playlist. 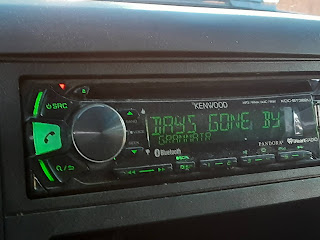 It was hardly fair for my truck to remind me of "Days Gone By" as I was reflecting just a bit on how much work we have done using this vehicle since 2012.

Chumley has helped us to make over 1000 (just estimating) deliveries of all sorts.  Sometimes we were delivering CSA shares, at other times we were making larger deliveries to other outlets.  There were times that the back of the truck was packed from front to back, side to side and all the way to the top with coolers, trays and the necessary tables.  In fact, there were too many times that I had to REPACK the truck because I noticed one more container had not gone in and we had to find a place for it.

We've stuffed the back full of square bales of straw.  Chumley has pulled a bin full of 3000 pounds of feed while carrying a bulk bag holding 750 pounds for the laying flock - multiple times every year.  We have packed in an order of supply's from Nolt's consisting of drip tape, starting trays, pots and various irrigation equipment.  We piled in bags of starter soil from another supplier.  There have been trips for lumber, recycling and trash runs and a few memorable trips where we hauled items such as a mulch layer and the farm's lawn tractors.

This doesn't even begin to consider the trips we have made with chickens, turkeys and ducks over the years.  To "the Park," from "the Park."  To "Freezer Camp," from "Freezer Camp."  To customers... ok, there is no 'from' for that one - which is a good thing.  Midnight drives in the middle of a lightning storm on the way back from dropping off the first batch of broilers in Greene... ah... good times. 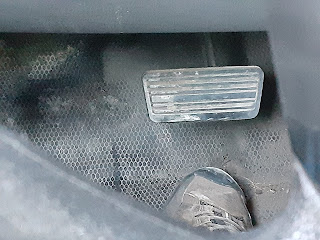 I considered pumping the brakes on this trip down memory lane, but I realized that this was a healthy reckoning of a sort.

You see, I DO appreciate this truck and I DO hope we can continue to rely on it for years to come.  But, this wasn't just about being nostalgic for a truck - it was about the recognition of years (including those prior to Chumley's appearance on the farm) spent doing what we do at the Genuine Faux Farm.  The number of times each of us has climbed into and back out of the back of a truck is a reflection of what it is like to dedicate yourself to a small, diversified farm in northeast Iowa.

And, this is why it can be so hard to try to make a connection with other people when we try to explain what it is like - doing what we do.  How do you get someone to understand our brand of farming until they have climbed into and back out of a pickup truck thousands of times?  How can a person fully appreciate that the continuous motion and low-grade, but continuous, stress that comes with the harvest, clean, pack, load and depart cycle can make it difficult to not want to doze while you drive to your destination?  Can you actually appreciate why I still try not to laugh when I remember the face of one of our outdoor cats that happened to get into the back of the truck and was stuck in there as we started to drive down the road?  Do you really understand why I sigh a little bit when I have to unload the truck back at the farm yet again after another delivery?

Or maybe you can start to understand... even if you do think it a bit odd that the numbers on an odometer can take my mind to all of these places.

Email ThisBlogThis!Share to TwitterShare to FacebookShare to Pinterest
Labels: Look in the Mirror