Different Kinds of Tires - Look Back

Rob is taking a short break from writing new blog posts.  Instead, he has selected a few posts to republish this week that he thought you might enjoy.  The first selection is from September 4 of 2012.  I have added a couple of pictures and made a couple of smaller edits.  But, if you see something that is 'out of date,' well....  that's why it is a 'retrospective.'

The original title was "Different Kinds of Tires" but it apparently also made me think of "different sorts of tired." 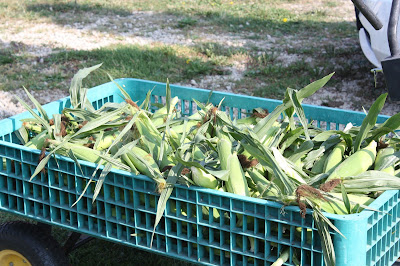 Tireless
We've been hearing a clicking noise on the front left wheel on one of our green carts the last couple of days.  We had an idea that the weld wasn't holding.  But, of course, this was the cart that had the correct pins for pulling behind the lawn tractor during picking today.  Since Rob was the only person on the farm today, he may have been a bit more focused on doing and less on things such as.......well... keeping an eye on how the cart behind the tractor is doing.

The wheel is now resting somewhere between the field and the packing area.  Happily the swiss chard that was picked was not also strewn along the path.

I did kind of wonder why the cart snagged the hose as we went by. 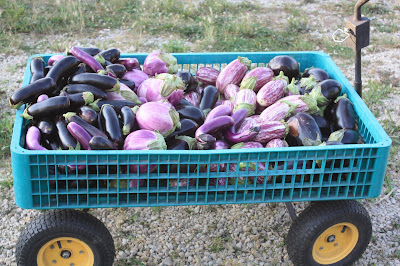 Retired?
These green carts are important tools on the farm.  But, they are also representative of what seems like persistent shoddy work on equipment such as this that a small farm, such as ours, might want to purchase and use.  This was a "new" wheel that replaced an older wheel that had also lost its weld.  So, in a way, it has been re-tired twice...

In any event, if you rate a cart at 800 pounds, then the cart AND the wheels should handle 800 pounds.  Now ask the question.

How many times have we actually put 800 pounds on these carts?
Answer: never.
Hmmmmmm. 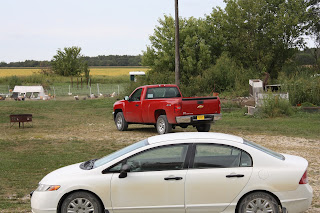 Attire
I was not prepared for today to be as warm as it was.  And, it was a bit more humid than I expected as well.  The result was a three t-shirt day (of course).  Needless to say, I attempt to clean up my attire just a little bit for the CSA distributions.  But, sometimes I wonder if I should even bother.  Today, being a prime example.

Setting the scene:   It's been dry (yep, again).  Our road was just graded with some new gravel in places on one of the roads we take to get to Waverly.  We have a new truck and the topper has even more places to let dust in than it did before.  It was hot and humid.  I had to load what probably turned out to be half a ton of produce into the truck, then unload it and set it up for distribution.

I was wise enough to try to change shirts AFTER I loaded the truck.  But, if you've worked outside on days like today, you'll understand what I mean when I tell you that I didn't see much of the loading today.  Hey - my shirt was soaked through.  I had no dry place to wipe the sweat out of my eyes.  So, I was just guessing.

Then, of course, I had to take OFF the offensive, wet shirt and put on a new shirt.  I was in a hurry by then.  But, how do you put a nice clean shirt on when you are still stinky AND damp?  The A/C was not on in the house, so I went and stood in front of the fan.  Sorry kitty cat, I know you were downwind.

Once you arrive at the distribution, you have to unload.  Containers are NOT any lighter at this point.  So, you work up a sweat.  Once you get a bit sweaty, all of the dust that has accumulated all over your truck finds you more attractive.  In any event.  Water + Dust = Mud.  Suddenly, the nice clean shirt is sweaty and a bit muddy.  Whatever.  Please take my word for it.  I tried to improve my attire for the CSA distribution.

But, it begs the question - should I retire from improving my attire or should I tirelessly work to improve it?

Just Tired
This is perhaps the biggest reason for this silliness.  I am tired.  There are a number of things that could be done.  But I don't want to do them.  So, I wrote a blog post! 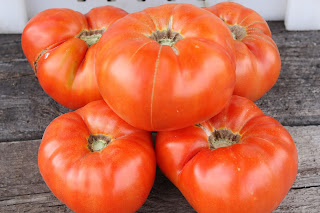 note: The pictures all came from August/September 2012.  They were not included in the original blog post.

Email ThisBlogThis!Share to TwitterShare to FacebookShare to Pinterest
Labels: fix it faux, Look in the Mirror, mekanikle ineptitude, Throwback