Can't Get There Right Now

Welcome to our Sunday postal history foray!  For those not familiar, in recent weeks Sunday blogs have provided Rob with an opportunity to share a little of his hobby in a way that gives everyone a glimpse into what makes some of the things he collects interesting.  Like so many things, these will last as long as they don't become a chore for me.  If they do, I'll back off until I feel like writing them again.  Seems fair enough... 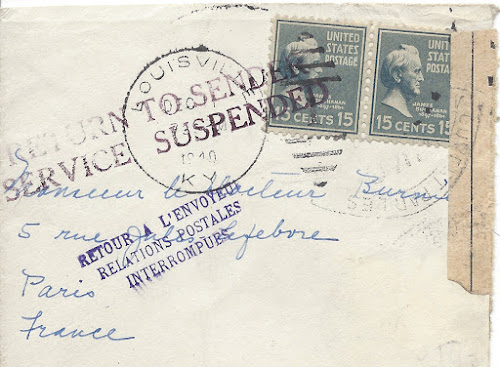 Here is a piece of mail that was sent in December of 1940 from Louisville, Kentucky to Paris, France.  At the time, airmail services overseas were becoming much more prevalent, but mailers had to pay the cost for the faster service.  The cost for a letter to France via airmail was 30 cents per half ounce instead of the 5 cent rate for surface (by boat) mail. 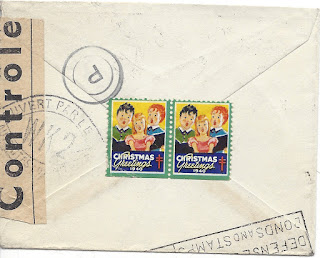 The back of this letter has some Christmas Seals, which probably gives us a clue that the envelope probably held a Christmas greeting of some kind - perhaps a card given the size?  But, that is not what makes this item interesting to this postal historian!

On June 14 of 1940, Germany took control of Paris.  A significant part of the population evacuated Paris and mail services were interrupted to occupied France (which included Paris).  A new, semi-autonomous government for 'unoccupied France' was established with its headquarters in Vichy in July.  Mail sent to France would be directed to Vichy-France, but there was no way to exchange mail with occupied France.  Essentially, mail for the occupied zone simply built up until...

In September of 1941, by order of the occupying authorities (Germany), mails were suspended to occupied France.  All of the mail built up waiting for a chance to be sent forward were returned to their origins.  Estimates at the time suggested between 100,000 and 180,000 pieces of letter mail were returned to the United States between September 17 and October 1 in 1941 - of which this is one!

In addition to the interesting journey, this item has a paper tape seal with the word "Controle" printed on it.  Between that paper tape and the football shaped marking, we know that a censor in Marseilles opened this envelope to inspect the contents.  Mail censorship was not an uncommon practice as authorities were concerned that military information could be leaked via the mail services - both intentionally and unintentionally.

And this item illustrates yet again why I enjoy postal history.  A simple Christmas greeting opens the window on a broader story in history.