I enjoy learning new things and I like to share information with others.  Sometimes I follow-up on questions I have had for some time.  For some of the things below, pictures from a recent hike spurred exploration into new topics (or topics I have explored some in the past).  And, there are also times when there are things I have done some extensive research on and I enjoy sharing that as well, in hopes that others will learn something new.

I hope you learn something new as you read this.  And if you don't, I hope it is just because you are REALLY smart and just happened to have already explored these particular topics.  Either way - good for you! 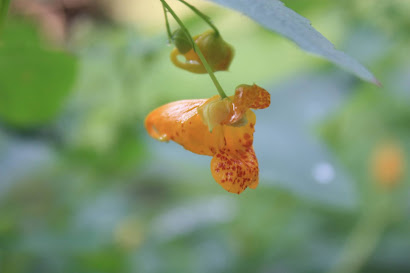 Jewelweed, also known as Touch-me-not, is a plant that it blooming right now in northeast Iowa, preferring damp, shady locations.  They are a member of the genus impatiens and as such create seedpods that will burst when you touch them.  I have read that this is where the "Touch-me-not" name comes from, though I am unsure if I can verify that or not.

The interesting thing I thought I would share about this is that Jewelweed was used by various Native American tribes to treat rashes - including those caused by poison ivy.  A 2016 study published in Pubmed shows that there is at least some efficacy for using a mash concocted from these plants.  The study also seemed to indicate that modern soaps were probably better to deal with the problem, though I suspect from the method description that they did not test it on advanced rashes, but more as a preventative after exposure.

There you go - something new to me.  Perhaps it is new to you? 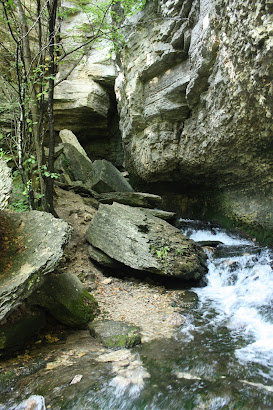 According to this Iowa DNR Survey in 2005, Dunning's Spring's temperature is 45 degrees Fahrenheit year round with slight variation if heavy runoff from rain or snow melt joins the stream.  The underground caverns and streams flow through 'carbonate' rocks such as limestone and dolomite, which can be quite strong, but will slowly dissolve as it comes in contact with the acidic waters.

There you go - something that I knew a little bit about and now I know a bit more.  How about you? 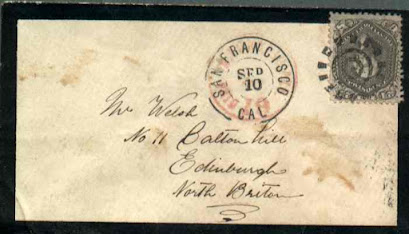 The 1860s would mark a shift in mail use that saw many more people sending personal correspondence in the United States.  Prior to this, most mail was limited to business or to those in the upper class.  The Civil War prompted more letter writing, just as the surge of settlers to the Western states also encouraged people to 'write home.'  The use of envelopes became more common and specialized stationary followed suit.

While you can certainly find black-bordered envelopes used for mail prior to the 1860s, they became more common and were used as a way to indicate that the contents held a death announcement, hence the label 'mourning cover.'  Their use became less prevalent as the 1800s waned, but you can still find them in later periods of time.

There it is - a partial summery that is likely new to many who read this, but not new to me.

I hope everyone has a fine weekend.  And, maybe, I'll do this again on future weekends.  What do you think?

Email ThisBlogThis!Share to TwitterShare to FacebookShare to Pinterest
Labels: Researchers R Us