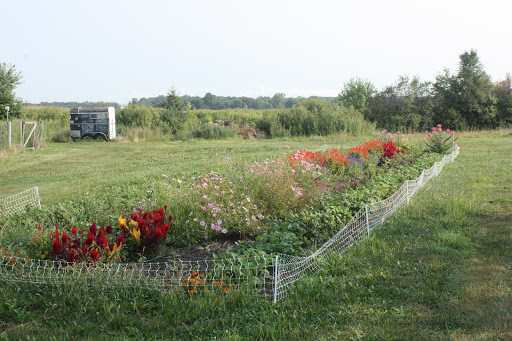 It is not really all that big of a plot for our farm.  Maybe 30 feet by 100 feet in size, more or less.  There are three rows of green beans, two rows of potatoes and one row of flowers.

The potato plants are done for the year, more or less.  There are few that have some greenery on them, but for the most part, the stems and leaves are brown and it is time for us to dig the potatoes.  Once again, the Colorado Potato Beetles were tough this season.  The early wet weather did not allow the beans to really flourish early, which meant any protection they might have given was pretty much a moot point by the time the beetles found the plants.  We got some much needed help picking the beetles off the plants, but that task can get mighty tedious!

Even so, the Adirondack Blue potatoes seemed to have less difficulty and early sampling shows that we'll have a decent crop of those, more or less.  The Adirondack Reds are likely to be less than more because the plants terminated before the tubers really bulked up.  Even so, we have some of those too.

After a slow start, the Provider green beans have done us proud.  Unlike most years where Providers give us one big harvest, this batch is behaving more like the Jades, giving us moderate sized picks nearly continuously.  We don't mind - until we can't manage to keep up with the harvest.  When that happens, more becomes less.

And, of course, we're happy to have flowers in this planting.  Perhaps the cosmos were the wrong choice for their location and the volunteer chleome required a little extra work.  So, we'll remember to put the cosmos at the ends of rows rather than the middles and we'll also remember that chleome actually seem to germinate better later and don't particularly care for us to try to start them early in trays.

And there you are - a blog post about one of our garden plots on the farm - more or less.