No More Summer Fest at GFF 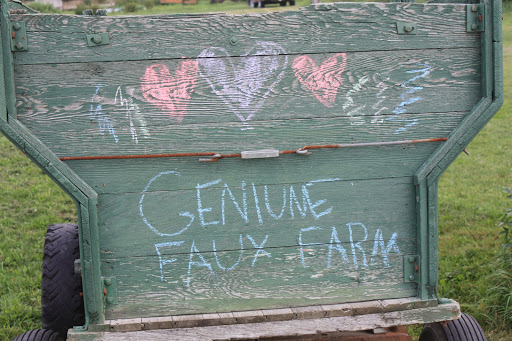 It is the end of August, and there was no Summer Festival at the Genuine Faux Farm.  An August gathering just prior to the start of school rapidly became a tradition for us at the farm and not because we were farming and selling produce and poultry.  The origin of this farm gathering actually came from our tendency to offer our place for a before-school starting gathering when we lived near Ridgeway and Decorah.  It was a natural extension for Tammy to invite her colleagues at Wartburg for something similar.  It just happened that some of our customers were some of the same people.
We began trying to hold annual Spring and Fall gatherings at the farm as early as 2006, but our first August gathering at the farm was in 2004 - it just was not billed as a 'farm function.' 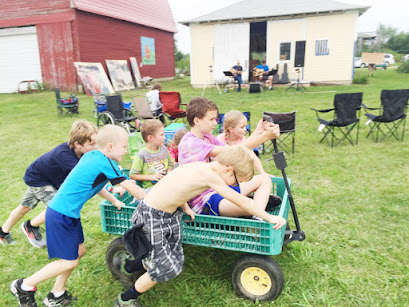 One of the darnedest things about having gatherings is that you never quite know what is going to get the attention of the younger crowd.  This is actually important for a couple of reasons.  First, a farm has some dangerous places and dangerous things.  We worked very hard to try to identify anything that was both dangerous AND attractive to a kid so we could remove access and avoid any unfortunate accidents.  I am proud to say that we managed to accomplish this task for each and every event....  well, we think we did because no one was hurt at any of these events.
Second, there had to be ***something*** "farm-ish" that would be interesting for the kids at the farm.  We weren't always sure what would work, but we tried our hands at several things (with varying levels of success).  But, nothing... absolutely nothing... garnered as much attention as the green carts we used on the farm.  Not a single event (other than the couple that occurred when it was actively raining) went by without an opportunity to take a picture of kids finding all kinds of ways to make a green cart into something VERY fun.
Of course there was food.  Sometimes there was music.  We often made a grill accessible.  Later on, we would roast a turkey and provide the basics for sandwiches and ask everyone to supplement with a potluck style event.  There was a painted rock hunt, painting on a fence and doors, lawn games and even some tractor rides.
And who could forget the annual 'Scavenger Hunt?'  I would take a few moments away from trying to clean everything up and being prepared for guests and go take a batch of fifteen or twenty pictures.   I would then print sheets out for people to meander around the farm and see how many they could find.
Here's a whatsit!  Anyone know what it is and where it might be located on our farm? 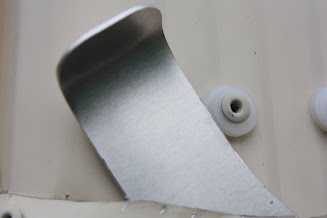 And here is another one.  This one even stumped Tammy! 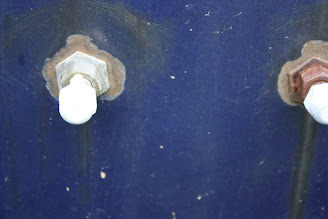 The painting thing got us into a little bit of trouble - even if we liked the results (see the door below).  You see, not everyone read about the painting in the gathering announcements.  And, once you arrive, how do you tell your child "no" when all of the other kids are painting.  I suspect there were some shoes and other items that were not used again after that little activity was over.  As you can tell from the first photo of this blog post, we moved to colored chalk and encouraged people to draw on our flair box and on other surfaces we provided. 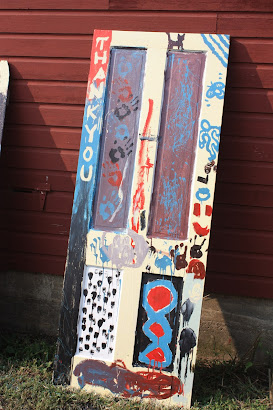 Speaking of this door.  We still have it.  It sits in the corner of our garage at the moment - but we brought it out and put it on display each and every event after the one during which it was painted.  Oddly enough...  I still feel good when I see that thing.  I'm just trying to figure out how to put it somewhere so I can see it a bit more often.  No, do not suggest putting it IN the house.  This is a 'farm thing,'  not a 'house thing.'

So... here we are.  August 31.  There was no Summer Festival this year.  In fact, there were no farm gatherings this year.  Yeah.  Pandemics do that to farm gatherings.  But, so do changes in what the farmers do.  Even if there had been no pandemic, there was a good chance we would have held no gatherings this year anyway.   It is sad to consider that possibility, because there was something very positive about these events.

Yes, they were a good deal of work for us.  Yes, they could be a bit stressful for us to host them.  Yes, it took a few days to recover from them.  And, yes... we still miss them.

So, happy Summer Festival away from the Genuine Faux Farm this year.  Have a s'more.  Paint a door.  Push a cart around the lawn.  Maybe we'll throw a few tomatoes to the turkeys and record them running around - and it will be just like you're here.

Email ThisBlogThis!Share to TwitterShare to FacebookShare to Pinterest
Labels: Events