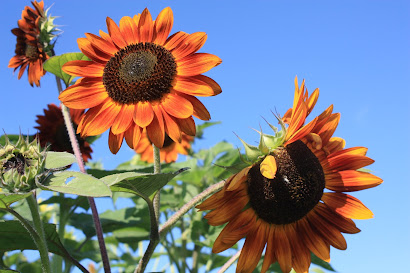 The last couple of weeks have been full of 'unplanned events' that have been getting sandwiched between (and sometimes over) the planned events.  Nothing abnormal about that since that seems to be the way life goes.  But, Friday had an unplanned event that resulted in the two of us doing something new.
Prior Honeybee Swarms
We have experienced a few swarms on the farm in the past.  I recall a year when we both heard a humming/buzzing noise that appeared to be coming closer.  Happily, the flying ball of bees did not run into us as it went by.  That event was so far away from any of my previous experiences I have a hard time recalling any other details about it.  We were told there were a couple of wild honey bee hives in the woods about a half mile away from our farm when we first moved here (2004) and I seem to recall this was about 2006.  Since that time, the wild hives have died off (and that's another story). 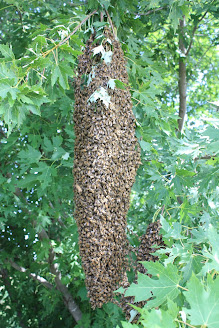 The second swarm we experienced was at a time when we had John Axon keeping some bees on our farm.  The agreement was that we wanted them as pollinators for our vegetables and he could do what he wanted with respect to honey.  We noticed an old wooden box we had built had a big ball of bees in it and called him up.
John told us he would be out when he had a moment and that we didn't really need to do much other than check in periodically with the bees to make sure they didn't move before he got there.  When he said that, I wondered what he thought we would do IF they decided to move.  What do you think?  Stand in front of them with our hands out trying to make them stop?  Get a large butterfly net and try to catch them all, hoping they weren't strong enough to carry us away?
Of course, we knew what he meant.  He wanted us to watch where they went if they decided to move and if we couldn't locate them he wouldn't bother coming out.
When John got to the farm, he just took a hive over to the bees, put some gloves on and then scooped the bees into the hive.  As he dropped them in, you could hear them hitting the bottom of the box.  It just seemed foreign to us that you could scoop up living creatures and basically pour them into a container. 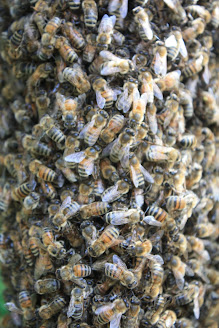 The 2020 Swarm
We got our own honeybee hive last season rather than try to find others to maintain an apiary on the farm.  We don't intend to collect honey from these hives on any regular basis.  Maybe a little for us when the hives are doing well.  And, for the first time on our farm since we've lived here, we had a hive survive the winter months.
Since we were pretty uncertain that we would have success, we had also ordered new bees, kind of expecting we would have to replace the 2019 group.  We didn't have to, so we started a second hive.  And, for the first time with our own bees, we harvested a small amount of honey for ourselves.  We consider that a nice accomplishment.
Well both hives are pretty healthy and one must have been feeling a bit crowded, so a swarm split off with their own new queen.  We found them balled up on a couple of Silver Maple branches near our vegetable cleaning station.  The weight was enough that the branches were hanging straight down towards the ground.
Essentially, other than the branch and a few leaves, this was a ball of bees.  Somewhere inside of that ball was the queen.  We did not exactly want them to leave our farm, nor did we want them to decide that this particular tree or area would be the best place to set up shop.  So, we did something else that was new for us.  We tried to capture our first swarm of bees on our own.
Catching a Swarm
Tammy made a quick call to a friendly, local beekeeper for some advice.  He was working, otherwise I suspect he would have come out to help us.  But, the best help was just to give a calm, no-nonsense reassurance that it was not going to be a terribly difficult job.  After all, if you were not raised with bees, you were likely raised to believe that bees were a stinger just waiting for a target.  This person told Tammy that he has caught swarms while wearing short sleeves and sandals (no beekeeper suit).  Take that comment however you want. 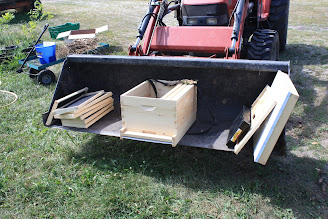 But, there was one particular issue.  We did not have a hive to put these bees into.  All of our supers were in use.  So, Tammy had to go get something to put them in.  Once she returned, we set all of the things we thought we would need into the bucket of the tractor. 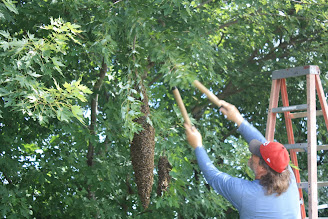 Then, we cleared away some of the branches that were going to make access to the swarm even harder.  The bees were mostly concerned about their own business and did not mind when I was right next to them taking pictures nor did they mind as I trimmed branches away.
The plan was to get the new box set up as much as we were able and then bring the tractor to the hive, placing the new box just under the swarm.  Since Tammy has the bee suit, she got the job of cutting the branches that held the swarm and directing them into the box.  Rob had the job of monitoring the tractor. 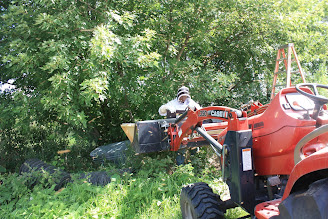 The swarm was quite heavy and it hit the box with a nice 'thump.'  The branch had a little kick back to it, so some bees rained all over the tractor hood and on to the driver of said tractor.  While that was a little startling, we both knew that as long as we didn't swat at them and didn't make rapid movements, they really weren't at all concerned about us.  In fact, I was able to gently brush the bees off of me with no problem whatsoever.
Actually, it was kind of neat to see them up close and personal (after that initial surprise). 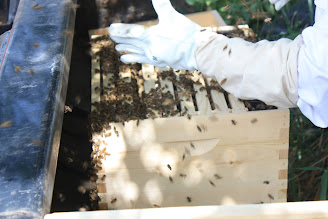 The next trick was to put the rest of the frames back in the hive along with a 'feeder frame.'  Once the feeder frame was in, Tammy poured some sugar water into the feeder frame to give the new colony some food to start with.  There were numerous bees on the outside of the box that she scooped into the interior. 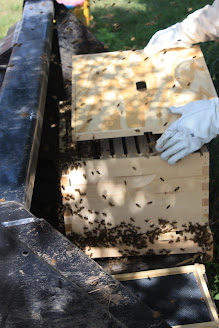 Once that was done, Tammy worked to put the lid on and make sure the whole box was lined up properly. We used some bungees to strap the hive tight so it would not shift as we moved it to the new location. 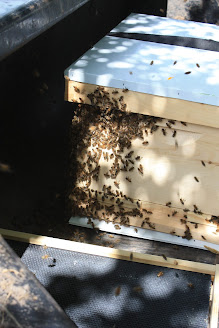 Many of the bees in the swarm were airborne during this process.  If you want to know what that sounded and looked like, here is a video we took during the process.
Once things were secured, we slowly drove the tractor to the new location.  Some of the bees that were flying around followed us.  Others hung around the tree for a while and eventually dispersed.  We'll never know if they decided to go back to the old colony or if they found the new one.
Once at the new location, we were able to lower the bucket close to the pallet that was going to hold the new hive.  They are now in their new location and we'll check on them over the next few days to see if they decide to stay.  We hope they do, because we don't mind having the extra workers on the farm.  Now, we just have to keep working on feeding them. 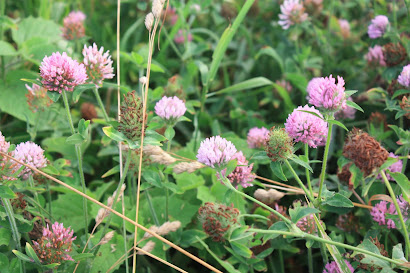