It's only natural that we should err.  That we might offend.  That we will mislead.  Hopefully all without intending to do so and also hopefully with the desire to change and fix things when we do. 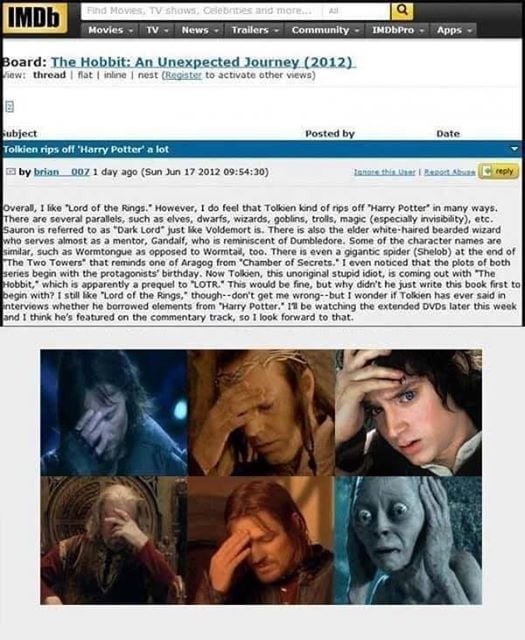 If you can not easily read the review, here is the beginning: "Overall, I like 'Lord of the Rings.' However, I do feel that Tolkien kind of rips off 'Harry Potter' in many ways...."  The commentary goes on to mention other things that make me wonder if the person writing this is just pulling everyone's leg here.  Even so, I have met or witnessed numerous cases where someone who CLEARLY does not know what they are talking about takes their partial knowledge and goes on a tear with it...

Just because YOU saw the Lord of the Rings movie after you saw a Harry Potter movie, it certainly does not mean that they were created in that order.  Yet, people often assume their experience of the world is the ONLY experience of the world.  Then, they make of facts and explanations that fit that experience and reject all others - and the natural response of those who might know better (even if they don't) is to respond by putting their head in their hands...

This is a reminder to me that we do not enter this world with immediate and complete knowledge of all that has gone before our time.  It is also a reminder to me that everyone has blind spots.  Everyone gets lazy sometimes and many people get lazy and still decide to make definitive statements that are flat out wrong.  What's worse is that other people take those statements as truth and.... away we go.

I still have some hope: 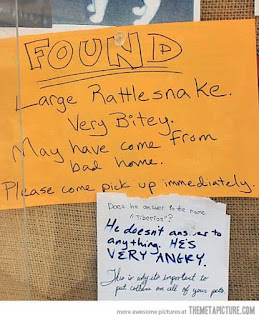 As a person who has been an educator, who has presented at conferences, who has been asked to speak at various events and who has written for various things over the years, I can tell you one thing for certain:

I am certain I have said or written numerous things that were inaccurate, faulty and probably down-right embarrassingly wrong.  With that knowledge, I put forth these hopeful thoughts.


What we think we know at any point in our lives is certainly not the whole truth.  If we believe that is the case, then we are mistaken.  Not only are we mistaken, but we are short-changing ourselves and the world we live in.  This world and its inhabitants are wonderfully complex and often beyond our complete understanding.  Instead of reacting as if you were a large, very bitey rattlesnake (as tempting as that may be) when someone points out that you might be mistaken, perhaps we could be a bit less "bitey" and a bit more reflective.  This is true EVEN IF it turns out you were correct in the first place. After all, someone reacted the way they did for some reason - and you may actually hold some of the fault for that.  Own it and adjust.

Be firm / Be kind:
I try to live by a two-side principle with varying amounts of success.  "Be harder on myself and be kinder to others."

Before you go jumping to conclusions here, let me clarify.

When I say I should "be harder on myself" I am not saying I shouldn't forgive myself, nor am I saying that I should make myself suffer for perceived and real sins. What I am saying is that I need to force myself to expect more when it comes to figuring out what is true and what is the best course of action.  I do not want to tolerate being lazy when it comes to responding to criticism either.  If someone offers me criticism, there is a reason for it.  At the least, I should consider the criticism on its own merits - even if the actual words of the criticism don't accurately reflect the truth.  Perhaps the problem was in the delivery?  Maybe it was the word choice?  Is it possible I didn't look like I meant what I said?  It is entirely possible that there is another way to deliver what I was saying that will reach the person who responded badly?  And, you know what?  It is entirely likely the criticism holds some grain of truth I can incorporate in the whole of what I know - it is not required that I come away from the experience with a complete reversal of what I once new.  It is only required that I grow, learn and adapt for the better.

In short - I have responsibility for what I say or what I write.  It is important that I own up to how well I support my own learning and how carefully I consider the facts and circumstances and I how I interpret them.  And, as they say, the only good writing is re-writing.  Well, I am coming to believe that the only good combination of belief and knowledge is one that is constantly under revision.  And that, my friends, is also hard.

And as for that 'being kind to others' stuff?  It certainly doesn't mean you keep your mouth closed when someone is doing something or saying something that isn't right.  It means you give them to gift of constructive criticism and you give them the space to process rather than standing over them to achieve 'maximum shaming.'  Your job is to help someone grow and become better here.  To make things more difficult, there is also the idea that there are times when not engaging is the best answer.  Last I looked, finding ways to build resentment or destroy all self-esteem were two excellent ways to prevent improvement.

And yes, I need to be kinder to those that offer me criticism by not immediately responding as the 'bitey rattlesnake.'

And I can tell you, a leash won't work.  It's really hard to find a neck on a snake.