We Should Walk There Again Too (Two)

A couple of weeks ago (I think - after all, I am not even certain what today is), we took a trip up to Decorah with the expressed purpose of visiting some beautiful places we used to walk through on a semi-regular basis when we were in college and when we lived in the country near the town of Ridgeway.  Not long after the trip, we wrote a blog featuring Twin Springs.   Now we get to show a little of our visit at Dunning's Springs.

Of the two locations, I suspect Dunning's is the more popular and more frequently photographed.  After all, it does have a nice waterfall.  And, it is closer to downtown Decorah, just across the river. 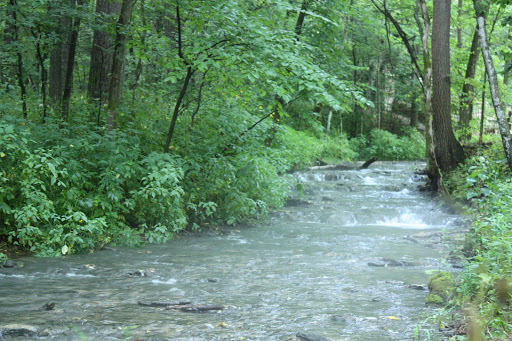 What pleases and annoys me (yes, both) about Dunning's is the fact that there is this nice paved road that runs fairly close to the stream.  It sure is easy to take a walk fairly close to the running water.  But, it does tend to detract from the 'wildness' of it all.  However, if you look at the photo above, you might swear that we were well away from roads and homes and...   well, you get the idea.

Sometimes I take pictures like this because they depict something very real - but there is also an illusion to it.  An illusion of wilderness (of a sort) even though it lies feet away from a paved road.  It reminds me that people can be alarmingly good at making things seem very different than they are.  It also reminds me that you might find truth and beauty by just taking one step off of the beaten path. 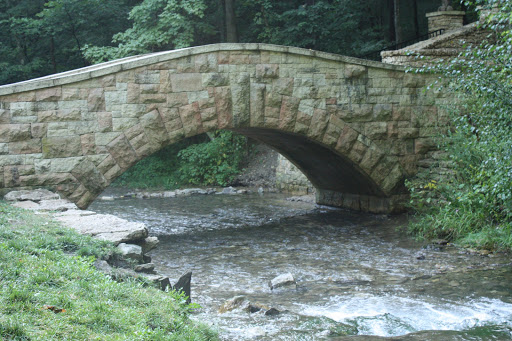 The stone bridge wasn't there when we went to college, nor was it there when we lived nearby.  This bridge was completed in 2017 and appears to be a fine piece of work - some real skill was required in making it.  I guess I admit at some level that I wish there was less of the human made and more of nature here.  But, if it encourages people to stay on the paths and enjoy nature without causing damage, I can certainly be for it.

I admit that I tended to favor Twin Springs because you walked through much less town before you could get to 'country' if you were leaving Luther's campus.  To get to Dunning's you had to walk through several blocks of town proper before you saw fewer houses and felt like you were entering the country.   But, I wonder if I might have come more often to Dunning's if the bridge and pathways were there.  They seem comfortable and inviting enough for a college student to read for a while.  Maybe we'll go back and try reading for while.

A test drive, if you will. 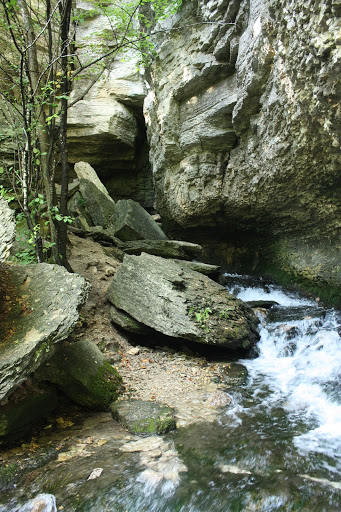 It was required that we "climb" the falls.  Ok.  I have always found myself climbing up the falls when I have visited Dunning's and this was no exception to that rule.  To our dismay, the two of us found that neither of us was quite as flexible as we once were.  So, the climb up and down was a little more adventurous than we once found it.  However, I think we both found our balance fairly quickly and it wasn't that big of a deal once we got into it.

For some reason, I find the water pouring out of the rocks to be captivating.  Even on a warm day, the colder water keeps the temperatures down. 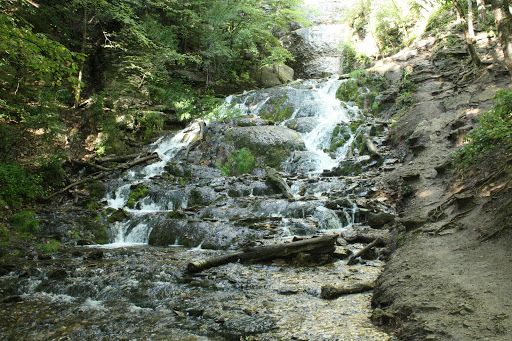 Tammy and I have had the privilege of visiting many waterfalls over time.  I think it would be fair to say that Dunning's is one of the hardest to photograph - especially when there is sunshine.  The sun tends to bleach out the top area when you take the picture.  Over all, it is just hard to show the depth and scale of these falls.

I guess we'll have to go back, take our camera and walk there again.

Email ThisBlogThis!Share to TwitterShare to FacebookShare to Pinterest
Labels: a crate full of grateful, Look in the Mirror, Picture This