Tammy and I were on edge most of the day yesterday.  We kept looking out the windows when we were inside and we often inspected the sky when we were outside.  You could feel that something big was going on.

The good news?  We could also see that it wasn't likely heading to our farm.  Each time we checked, we did not see anything imminent that required actions on our part.  We were spared from experiencing the damaging storm known as a 'derecho.'

Our biggest inconvenience?  We lost cell and internet service for a while.  We'll take it. 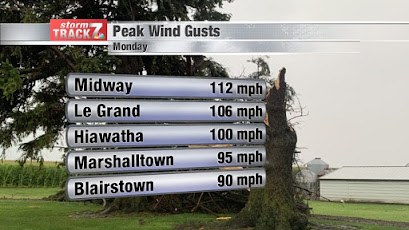 The graphic above is from KWWL, the 'local' television station.  There were multiple triple digit readings throughout the state.  The crazy thing is that the winds lasted so long wherever they hit.  In Iowa, we are used to storms that pack a short duration wallop.  They may come out of nowhere, smack you once real hard and then go their way.  Derecho winds?  Not so much.

Power is a pretty big deal for people at this time in history.  This many people losing power in the state is a big thing.  Even if you are philosophical about the loss of electricity (after all, we survived many many generations without it), you should consider that power loss is a symptom that indicates lots of other sorts of damage as well. 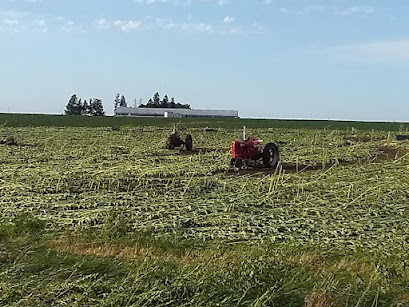 Our friends at Pheasant Run Farm were running a 'Sunflower Experience' that was very well received.  The field above WAS a field of sunflowers at their peak.  Ah well.  Needless to say, they announced that the Sunflower Experience has ended for the season.

Throughout the state, there are fields of corn that are just as flat as this field of sunflowers.  Vegetable growers in this storms path fared no better.  I'll just put a small little plug out there about this.  Commodity growers typically acquire subsidized insurance that is built for their growing methods.  Growers on a small diversified farm such as ours typically have no affordable options for insurance.

So, if you support a local food farm in the affected area, please find a way to continue to support that farm - even if they do not have produce for you for a while.  Be ready to be a consistent and reliable customer for them once again when they recover.  Thank you! 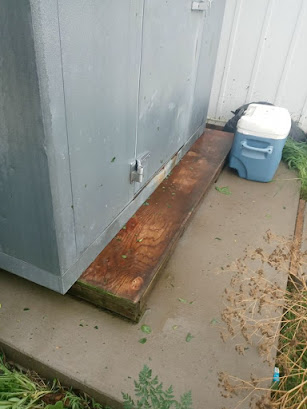 Our friend, Ben, at Wabi Sabi Farm near Granger shared this one.  What you are seeing is a walk-in cooler that was pushed part way off of its slab.  This is a VERY heavy piece that was moved more than a foot in one direction.  Ben reported significant crop damage and high tunnel damage.

Thank you to those of you who asked after us!  It is appreciated.  Again, we are fine with no damage.  We are, however, very concerned for so many other folks who cannot say the same thing.  We stand ready to help as we are able and we ask you to do the same.

A couple of additional graphics became available as the day progressed that I wanted to include.  The first is a 'time elapse' of the progress of the derecho.  You'll notice that, for the most part, northeast Iowa was not severely impacted by this system.  There were some T-storms that are not shown in this capture, but nothing causing any kind of significant damage.  In fact, our farm only recorded .07" of rain during this period and only had winds gusting to about 30 mph. 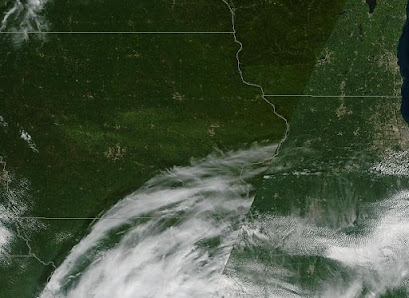 The second is a satellite image after the storm.  If you click on the picture, you can see it better.  The lightened swaths in the center of the state show downed crops.  These areas represent over 10 million acres of crops.  Crops, such as corn, need not be toppled completely (as these fields likely are) to be at least a partial loss.  If they are leaning, it may become impossible to harvest with a combine.