Cleaning Up After the Storm

On August 10, a massive storm of the type everyone in Iowa now knows is called a derecho (pronounced: dr ay cho) blew through our state with devastating effect.  Our blog had a post the next day that addressed the situation as we understood it at the time.  We were fortunate to be North of the wide band of destruction.  Our farm and home was spared from experiencing the difficulties so many others are dealing with right now.

Starting in the late morning hours last Monday both of us were getting a bit nervous and edgy.  At first, we weren't quite sure why that was, but we found ourselves looking at the sky - over and over again.  We know, after many years of working outside at the farm, that our weather sense is sharper than many people.  There was a frightening energy that day, but we never did see the approach of an ominous sky on our horizon.  We soon learned that many other folks in the state did see such a thing - and then they experienced those storms as they rolled right over their homes, farms and communities.

We did take a trip to help family and people we know and brought supplies, some items for a meal and whatever meager help we could manage.  And we saw things we've seen before - but never thought we'd see so many times or so extensively in one trip.  There were multiple grain storage bins that were crushed like soda pop cans - it didn't seem to matter if they had grain in them or if they were empty.  We saw field after field of flattened crops.  Every town we drove through looked like a tornado had gone through and damaged pretty much EVERY property.

As more pictures and videos came out, we also saw things we had not seen before.  Things like Harvestore silos looking like... well, this. 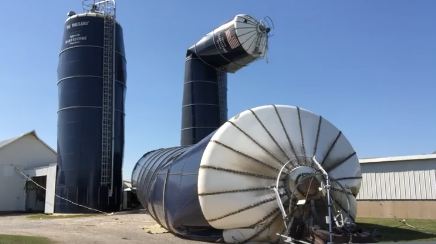 At about 5pm on Monday, the number of customers without electricity stood around a half million.  Over 1/3 of the customers tracked in Iowa.  At 3PM on August 17 - almost exactly one week later - there are still over 68,000 power outages in the state.

Let's put this in perspective.  We were on the farm in February of 2007 when an ice storm hit Iowa (and surrounding states).  According to the National Weather Service summary I linked here, over 180,000 were left without power -some for a little more than a week.  We were among those without power for a few days.  The good news?  It was cold enough to keep freezers frozen and warm enough to allow us to use supplemental heat and keep our water pipes from freezing in the house.  But, we do know what it is like to be without water (we have a well) and to worry from moment to moment about how we would deal with all of the things that come about in these situations. 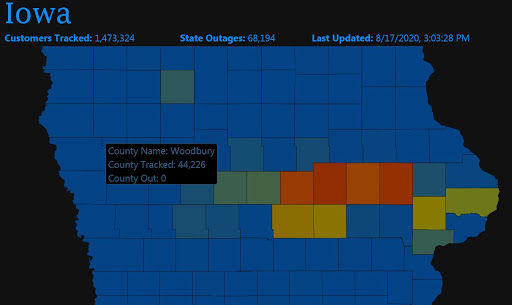 I admit that nature and its weather fascinates me, so it has been hard to not look at more information regarding this storm.  I also admit that I feel a need to justify for myself why so much damage occurred.  I saw much of it with my own eyes - yet I still need verification.  It doesn't make sense.  Yet it does. 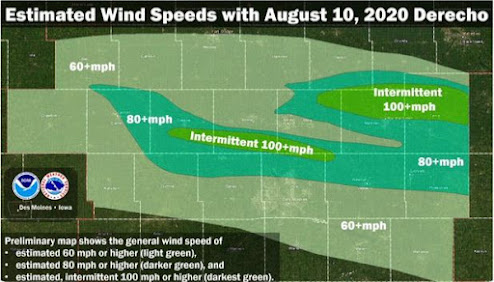 So, How Can We Help?

We recognize that our jobs probably will preclude our doing much more personally to help, though we will not rule that out.  But, there are other ways we (and you) could consider helping.

State Auditor Rob Sand recommends donating to the Iowa Community Action Agency for the region you wish to aid.  Similarly, he has suggested that a local United Way organization may also be a safe and effective way to help.

As with all disasters, other options may pop-up, but it can be hard to tell what is legitimate and what is not.  I've appreciated Sand's forthright approach to things and feel his recommendation can be trusted.  Now, of course, the focus here is on the Cedar Rapids area, where the bulk of the affected population is.

Iowa Public Radio has published this article that illustrates ways you can seek help if you have lost work or need help with damage due to the storm.  The Iowa Department of Human Services also put together a Derecho Resources page that includes applications to apply for food loss relief if you meet income guidelines and a disaster assistance grant (with similar income restrictions).  KWWL also developed a page to help people figure out how they can help - including helping with cleanup.

This is going to be a long haul problem in our state.  I tend to agree with Art Cullen that we're going to see larger derechos more often than we have in the past.  And, before I go on, I want to point out that we experience a derecho every couple of years on average in Iowa.  We just don't typically experience one that is this big.

We are playing a losing game with our corporate agriculture approach that promotes only a couple of commodity crops in the state.  We're destroying our soil, which was once our strongest asset (and still could be).  Corn and soybean farmers were already farming at a loss this year unless, perhaps, they were certified organic.  Even if the insurance covers their crop damage, it still represents a loss.

We keep kicking the can down the road for various infrastructure services rather than taking an initial loss so we can be prepared for disaster.  Downed power lines in the Midwest are not new.  When will we bite the bullet and bury lines in areas where it makes sense to do so?  No - I am not one of those "bury them all" people.  It makes no sense to bury lines in flood zones, for example.  And, lines that carry heavier loads are probably not the best candidates.  But, we do have numerous lighter load lines in stable soil that is not prone to flooding AND that are in areas that have lost poles multiple times.  And, our prevailing storm winds are pretty well known in Iowa.  Why do we put poles on the side of a road where they'll block the road if they come down?  I agree that nothing is perfect - but we can do better than we are right now.

And while I am at it - as long as we do not make our Emergency Medical Services in Iowa a priority we run the risk of experiencing more loss during catastrophes such as the latest derecho.

If we aren't learning from our current struggles, then we aren't paying enough attention.  And even if we pay attention, there is almost too much to learn if we are going to stay on top of it all. 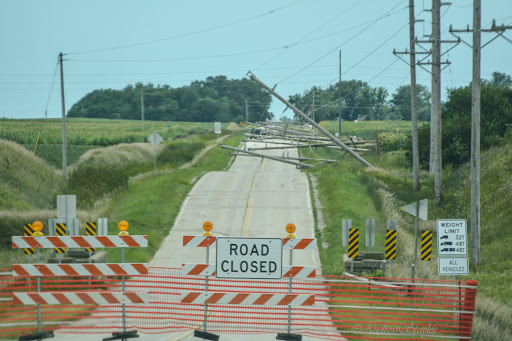