It's postal history Sunday!  The day of the week on the Genuine Faux Farm blog where we explore a subject the farmer enjoys and those who read the blog can be completely amazed that anyone would want to get into such detail over old pieces of mail!

You Must Not Delay! 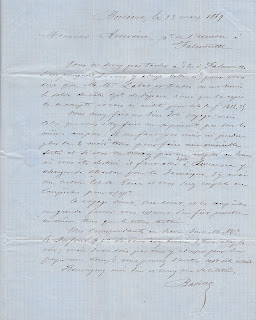 We are actually going to look at this one 'backwards' from the normal approach I take with a piece of postal history.  The contents of the letter actually give us some depth to the story that might help everyone understand both the irony and the difficulty this particular letter encountered.

The letter appears to be written to someone on the Brig (ship) Union.

“You must not delay being in Falmouth. This is why I am sending you this to tell you that Mr. Labar etc have given me the balance of your departure, as well as the copy of the account and see to it credited for this amount of 1,412 francs.”

The letter is written in French, so I took the liberty of attempting to translate the introduction into English.  Please remember that I am fighting three things here:  1. handwriting is not always perfectly clear on old letters, 2. I am not perfectly fluent in French and 3. there may be references to culture, current events or other common knowledge of the time that I may not recognize.

But, the content of the letter conveys clearly that the writer was concerned about the speed of both the ship and that this letter get to the recipients in time.  But, this is no surprise as much of the business content I have viewed from the 1850s, 60s and 70s reference some level of urgency or expedience.  On the other hand, the writer seems to be giving advice regarding what the recipient(s) should be doing next.  So, I could see why it might be important to the writer that this letter get to them before they head off to some other less desirable port of call.

We Don't Necessarily Deliver For You 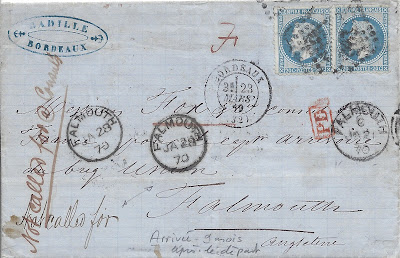 Monsieur Badille in Bordeaux was clearly anxious to get his directives to the recipients on board the Union - at least his letter seems to think imply that.  But, his address makes one wonder a little bit about how certain he could be that his letter would be received:

In short - he seems to be implying that the postmaster or a representative at the French Consulate in Falmouth should ASK the captain of the ship to get the mail for passengers on his boat or at least to get the captain to tell his passengers to go get their mail.

It was common practice for mail to be sent to ports of call in care of a foreign legation for persons on board ship.  However, just because the foreign legation was used to serving as a holding location for mail to the captain, crew and passengers of ships that flew their country's flag, that does not mean they would trot on down to the docks to hand deliver each letter.  On the contrary, a captain - or his representative - would typically go to the legation to check for any mail pertaining to the ship.  It was likely presumed that passengers might take care of their own business.

So, let me back up a second.  It was actually fairly common in 1869 for people to go to the post office just to see if they had mail.  Much of the mail was simply held at the post office to be picked up - not delivered to the address.  In fact, much of the mail addressed at the time had no street address given!  Some people who read this blog may even have a memory of "General Delivery" services at the post office where an item was held there for you to pick up.

Part of the issue is - not everyone would go every day and if a person was not expecting mail, they might not even think to check.  Did Messieurs Fox check to see if they had mail?  It doesn't look like it.

Either that or the letter arrived after they had left!  Poor Monsieur Badille!

If you look at the front of the envelope, you will see that the words "Not Called For" appears twice on the envelope.  Once in black ink and another time in red ink.  It is possible the black ink was applied by the post office, but there is no way to be certain.  But, the red ink actually says "Not called for @ consul's."  So, that shows us the foreign consul was at least consulted by the post office - and maybe the letter even resided at the consul's for a time.  Frankly, there is no way to tell for sure how it was handled during that period.

What we do know for certain is that the letter arrived in Falmouth on March 25, 1869, just two days after it was mailed in Bordeaux.  So, it is safe to say that the post office did its job with efficient mail travel.  We do know that the letter sat either at the French Consul's office or the Falmouth post office for some time and they diligently marked "not called for" on the envelope to show that no one had come to claim it.

And we know that the letter then LEFT Falmouth on January 28, 1870 - ten months after it arrived. 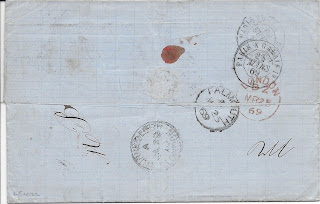 Many post offices labeled unclaimed or undeliverable letters as "dead letters,"  the United States even had a "Dead Letter Office."  This letter was probably bundled into a batch of dead letters that the Falmouth post office had accumulated over time and the whole packet was sent to London.  London's dead letter office was known as the Returned Letter Branch Office.  That seems a little kinder than "Dead Letter Office,"  but it came down to the same thing.  These were orphaned letters that could not be delivered for one reason or another.

This office would determine what to do next with each item.  The vast majority would get sent back to the sender of the letter.  It is not hard to picture Monsieur Badille picking up his mail on a February or March day in Bordeaux and thumbing through the pile of business correspondence.  Among those things would have been this letter.

A letter he hurriedly penned a year before with urgent instructions for the his people on the Union.

Well, at least this explained why his instructions might not have been followed!