You never know who might be watching you.  That should be enough to give all of us some pause.

It would be fair to say that this is something that was drilled into my head as the eldest child (who is now the youngest - but that's another story for another day).  I was setting an example for others in the household.  My siblings were always watching and you never knew for certain what they would take from my performance.  I suspect I failed and succeeded in equal parts in my duties - but that ALSO is another story.

But, it is fair to say that I was ever the observer.  While I was rarely pushing to be first in line to do things and I even more rarely wanted to try something new with any kind of an audience, I picked up far more than most kids by simply watching.  Watching and picking up the lessons that came with observation.

And... I loved baseball (and still do).  In fact, I was still pitching in an adult league as recently as 2012 (well somewhere in there). 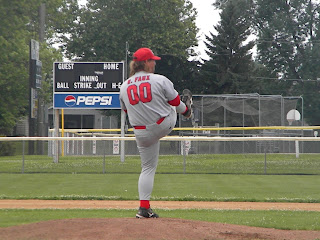 Those of you who played Little League and Babe Ruth League baseball in smalltown USA can likely relate to the situation I found myself in as I was learning how to play the game.  The 'season' consisted of ten to fourteen games and two (or maybe even FOUR practices) as busy parents did their down-right best to be a coach to kids with a wide range of commitments and skills.  It wasn't really until I was able to participate in the daily practices that came with high school baseball that I had more structure for learning the game.

I ended up pitching at various levels in part because I was one of the kids that could pretty much put the ball somewhere near the plate most of the time.  At that level, it meant something.  And, if you have ever watched a little league game, you have watched while some poor kid tried and tried to throw anything near the plate. It was excruciating for everybody involved.

When I returned to baseball, several years later, playing for the Newton Cardinals in the Men's 25 and up league, I was asked how I learned how to pitch.   My answer was mostly - "I watched others pitch."  Even at the high school level, we really did not have anybody who knew much about the craft.  As a result, our pitchers were mostly those who just threw the hardest....somewhere around the strike zone.

I learned to use my body as a lever and to throw myself forward into a good fielding position by watching Tom Seaver.  He had this penchant for getting so close to the ground on a follow-through that his back knee always had a dirt stain.  I figured out (finally) how to throw a curveball by watching Steve Carlton (a lefty like me) throw a complete game shutout.  I learned that there was a mental component to pitching when I heard Jim Palmer in an interview.  And, I came to understand that excellence in competition requires the fire, concentration, and will displayed regularly by Bob Gibson.

I also learned by observation that I did not want to be any of these people, though I could admire many things about each of them.  Tom Seaver could remember a pitch sequence from years before and could tell you how each at bat ended.  Bob Gibson exuded confidence and encouraged the players around him to perform - sometimes even better than their best.  All of them expected to finish what they started.

And, I learned that I did not have the physical abilities to approximate any of them.  But, I could still participate positively and I could still be involved in a game I love.

Bob Gibson passed away a couple of days ago and Tom Seaver left us earlier this year.  I have to admit that I did not really see Gibson pitch - just a bit before my time - but I read enough about the legend that was this person and saw enough footage to understand what he could do.  I was able to see Seaver pitch multiple times on televised games, especially when he played for "my team," the Cincinnati Reds.  The retrospective pieces that followed each player's death got me to thinking what I had learned from each of them - even though they were not mentoring me.

And I realized what I learned often did not fall into the category of things that I had opted to assimilate into my own life (or my own pitching philosophy).  But, what I WAS really struck by was how much I remember thinking about what I observed from these people I would never meet and would rarely see.

I thought a little more and realized how much MORE I have learned from others I did have more contact with.  Ever the observer.  Always trying to learn a little more.

Who is watching you?  What will they learn when they observe what you do?  Do you realize that some of these 'throw-away' moments in our lives sometimes provide lessons that help to shape what someone else does?

One day, outside of my grandmother's house, my Dad said something that stays with me.  "I don't mind paying Social Security as long as people like her (my grandmother) are able to continue to live a good life at home because they get support.  It doesn't even matter if I never see any of it myself."

I do not recall who he said it to.  It doesn't matter.  Ever the observer - I absorbed the lesson.  I assimilated it into my own system of belief.  It is important to do things that may not benefit you so others may have a better quality of life.

On another day, an older relative took me along for a trip to the hardware store.  The person saw a water nozzle that had a price sticker slightly folded over to make the $14 item look like $4.  I got a wink and they said, let's see what happens.  At checkout, the cashier noticed the fold-over and when asked, my relative said, with a straight face, "no, I guess I don't want it then."

Was it a big deal?  You tell me.  Ever the observer - I absorbed another lesson.  But, this time I didn't take the 'face value' interpretation of what had happened.   My eventual conclusion was that there are many times in life you do NOT take advantage of someone else's mistake.  Did I make that decision immediately?  No - I had to experience more and do more.  Over time, I came to this conclusion.  But, the initial event spurred the entire internal process of determining a value in my own life.

I observed someone who was loudly belittling some people they did not agree with, using unflattering names to describe them.  And, I observed while a kid emulated that same approach with their friends(?) or siblings(?) almost immediately afterwards.

No, they did not seem to be the children of the person who was speaking so poorly of others.

Ever the observer, I witnessed a parent berating a 17 year-old umpire for a Little League game - stabbing their finger viciously towards that young man's face to make their point.  And I observed their baseball playing child looking uncomfortably away.   And I also observed when that player did not return to play the following year.

What are you doing to represent yourself?

Remember, the observers are watching.