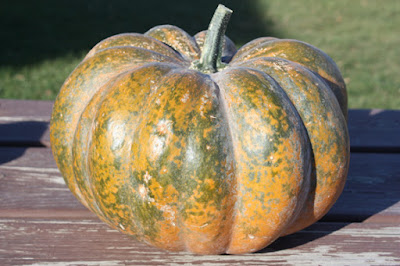 What is it about people being frightened of complication and complexity?  And why do we seem to have trouble telling children about that complexity?

Case in point - we tell kids that pumpkins are ORANGE. Period.  No exceptions.

Except, of course, when pumpkins are not orange.

As many of you know, we have a history of growing a number of heirloom vegetable varieties.  It has been uncommon for us to grow an orange pumpkin at our farm in part because we wanted to raise pie pumpkins rather than decorative pumpkins.  Very few of our pumpkins even begin to approximate the 'classic' Jack-o-Lantern type of pumpkin that kids draw in October at school.  For example, the picture above shows a Musquee de Provence - one of our favorite pumpkins to grow at the Genuine Faux Farm.

These pumpkins start out as a deep, dark green and begin turning into a tan/brown/orange color as they ripen.  They even continue to change color after they have been harvested.  But, have no fear, if you wanted to cook one of the pumpkins shown in the picture below, they all would have tasted just great!  I do think they taste even better after they've had a chance to cure for about a month, but we've had no problem cooking up one of these if there were some problems with a fruit we had just harvested. 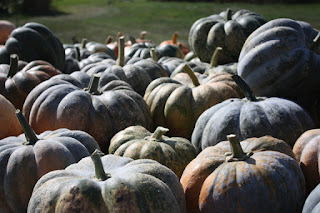 We had some kids come out to the farm a few years ago and they asked if they could see some pumpkins.  I showed them where the pumpkins were, but there was a great deal of disappointment (at first).  It was early and the fruit were small and they were all very GREEN.  No big orange pumpkins anywhere in sight! 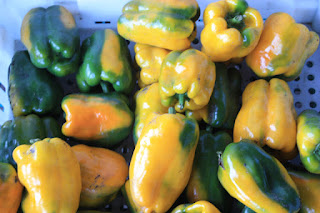 Kids who are not given a chance to learn that things are not always as simple as they seem (or as they had initially been explained to them) end up being adults who can't seem to figure out some basic things about veggies too!

The classic example is the colored pepper issue.  For some reason, I have run across a whole host of adults who never got the memo that colored bell peppers generally start as GREEN bell peppers and then change color as they age.  In fact, most bell peppers, if left on the plant will turn to a red color (except of course for the yellow and orange bells).  Even the purple bells will start to turn red if given a chance.  But, many purple bells are an exception because they are purple for their entire life... until they aren't!

For example, the picture above shows a batch of Quadrato Asti Giallo peppers.  They are an heirloom bell pepper from Italy.  Isn't the name great?!?  You know what it means in Italian?  Quadrato means "square" and Giallo is "yellow."  Let's just stop there and just sound impressive when we say the Italian name!

These peppers taste great when they are green and taste slightly better when they are yellow.  But, you might notice that they change colors in patches.  I tend to consider them ripe at any point when there are some big solid patches of yellow on the fruit.  They will continue to change some after they have been taken off the plant. 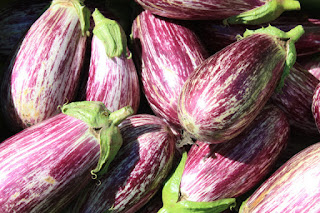 After that, striped eggplant aren't so hard to believe.

We hope everyone has a good week!