In the process of checking with Crazy Maurice, our young Weeping Willow tree, about his last blog post, he expressed an interest in providing me with more on the blog.  This was positively hasty on his part, but it was a good topic and worthy of putting out there.

You can see Maurice (this picture is from a year or two ago) in the background of the picture below.  He's a bit bigger now! 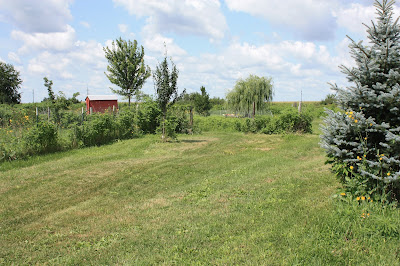 The Fuzzy Guy with the Red Top was nice enough to come out to ask if it would be ok to expand the Knuckleheads pasture (he means turkeys -Fuzzy Guy) to include the area around where I live.  I told him if it means more visits from Pretty Lady...   Well, and Fuzzy Guy, too, I suppose.

As I mentioned in my last post, trees simply do not forget.  Trees are also very observant.   That's my new word for today - I described what I wanted to say and Fuzzy Guy helped me discover the right word.  But, this might be why I get along with Fuzzy Guy pretty well since he tends to put some value on observation as well. 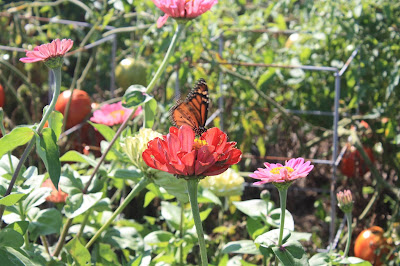 We were talking about the little fluttery things that can't seem to fly straight.  He called the orange and black ones "Monarchs," but I like calling them "little fluttery things that can't fly straight and occasionally glide, love flowers, and roost in tree limbs at night, sometimes tickling the host tree..." (note, there was more to this name - Fuzzy Guy).

This is where Fuzzy Guy and I sometimes have a problem.  You see, trees give names that are always growing as we observe more.  Humans tend to rely on a short name and hope that it conveys enough for others to understand what is being said.  I believe that this is why humans have so much trouble communicating.  They are always in such a rush to get things said that they don't see what needs to be said.  They rely on these silly abbreviations (another new word today!).

How can a short name, like "Monarch" possibly help another being understand what it is?  If we tell a being's full story with their name, wouldn't it be harder to discount their existence and importance?

I told the farmer he should be more like trees.  I think he might agree, but he had to run off and do something else.

There are days I envy his legs, but I do not envy the short attention span.

Farmers note:  Crazy Maurice's name for Monarch is a fair bit longer than what I shared above.  Part of the name has to do with how many Monarchs Maurice has seen in his relatively short life.  Even this young tree includes words like "infrequent" and "fewer" in his descriptive name for this butterfly.  But, perhaps the word that shocked me the most was the word "precious."

At the time, I did not think to ask about that.  What makes a butterfly "precious" to a willow tree?

I will say that this year has featured very few Monarchs on the farm and I find that fact to be distressing.  I, personally, have taken great joy on the days when dozens of Monarchs have visited our hedges of zinnias we plant each year.  We had zinnias again this year.  In fact, there was a 400 foot long row of them in the East fields this year.

My fear is that Maurice's name for Monarch will include "and were never seen again" at some point in the not too distant future.  If the Monarchs leave for good, the trees will see it.  And they won't forget.