How Did They Know?

It is Sunday!  And we all know what that means, don't we?

Well, around here it means it is time for a postal history post on the Genuine Faux Farm blog, that's what it means!

I had a very good question asked of me regarding some of the early letter mail I have shown in the past.  An inquisitive person wanted to know how the destination post office knew whether or not the letter they were delivering had been paid properly.

How did they know the postage was fully paid?

As you might guess, the answer to this question can have many different answers depending on the time and place in history.  For now, I will just give some examples from the 1850s and 1860s in Europe.

The envelope shown above carried a letter from Rome to Paris in 1856.  The cost of mailing such a letter was 20 bajocchi and there were three stamps properly paying that postage on the envelope.  That's great that I know that (and now you do too!).  But, how did the person who delivered this letter know that the recipient did not have to pay anything more?

Remember - at this point in time, you also had the option to send letters UNPAID with the expectation that the recipient would pay the postage.  It really would be helpful if the carrier who delivered this item would not have to carry a big book of postage rates along with them to check to see if it was all taken care of!

In this case, I see the red box with the "P.D." and that tells me (and the carrier) that this item was "payée à destiné," which translates to "paid to destination."

There is also a red circular marking applied in France.  Red ink was often code that implied an item was paid and black ink was often code for when it was not fully paid.  So, this cover had a couple of clues for the postal carrier that no additional postage was due from the recipient. 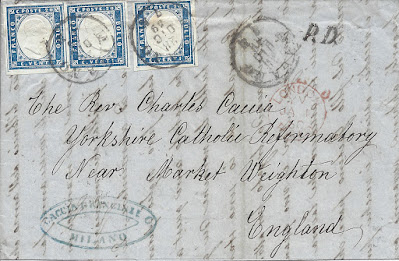 The folded letter (they folded the letter over itself rather than put the letter into an envelope) shown above was mailed from Sardinia (which was becoming a part of the Kingdom of Italy) to England in 1860.  Now that I have given you a clue as to what to look for, I suspect you can find the marking that told the receiving post office that the postage was properly paid to get the letter from Italy to England.

Yes, it isn't in red ink this time - but it is the same thing - "payée à destiné."  In addition, there is a red circular marking below the P.D. that was applied in London.  Two clues for the destination post office that all was well.

If you will recall from prior posts - countries had postal conventions where they agreed with each other HOW they would exchange mail.  Not every country had an agreement with every other country, but there were usually sufficient agreements to get mail from most every here to nearly every other there on the planet in 1860.  These agreements often dictated exactly how countries would indicate to each other that the item was properly paid or not.  Many countries in Europe agreed on the "P.D." as a standard signal that an item had no postage due.  But, that was not always the case.

The next couple of examples are not quite items that were mailed from one country to another, but they illustrate some other ways an item was marked as 'paid.' 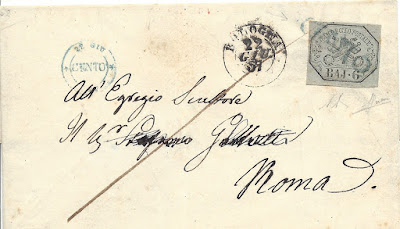 The item above was mailed in 1857 from Cento (near Bologna) to Rome.  At the time, both of these locations were located in the Papal States of Italy, territory under the direction of the Vatican.  The letter cost 6 bajocchi to go from Cento to Bologna to Rome and a green stamp was used to pay that postage.  The post office in Cento used a blue handstamp with the town name (Cento) to mark the stamp to show that it was recognized as paying postage - and to prevent it from being reused in the future.

The Rome office, during the 1850s and 1860s, indicated that postage was paid by putting a long diagonal slash in ink on the face of the mailed item.  It was quick.  It was fairly efficient.  And it served a purpose.

Now, when the clerk (or carrier) handed this item off to the recipient, they could quickly and easily see that nothing more was due on delivery. 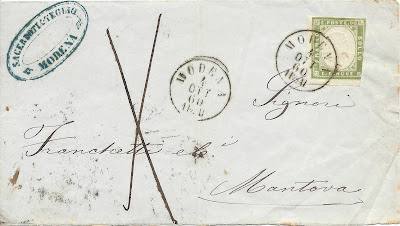 And here is another Italian item that was sent from Modena to Mantua (Mantova).  Mantua, during this period, liked to do a full "X" marking on items that had no additional postage owed.  These "X" markings were normally big and bold - quite hard to miss! 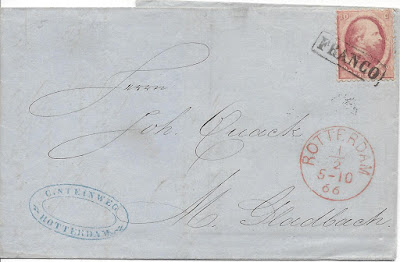 The Dutch and Germans tended to prefer "franco" to "P.D." for obvious linguistic reasons.  This item was mailed in Rotterdam in 1866 and sent to Gladbach in Prussia (Germany).  The Dutch post office combined the handstamp to 'cancel' the stamp with the marking to indicate that postage was paid.  The boxed word "Franco" clearly defaces the stamp and is visible for the delivering clerk to see. 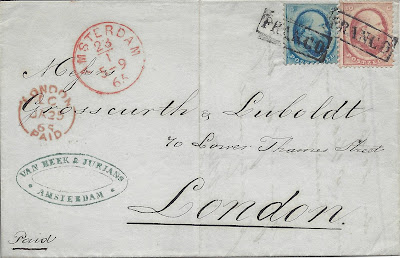 And, in some postal agreements, both countries were required to indicate that an item was fully paid.  This item from Amsterdam to London (1865) has the "Franco" marking on the postage stamps (applied in Amsterdam) AND the word "Paid" in the London circular marking.  As if that were not enough, the person who addressed this letter also wrote the word "paid" at the lower left. 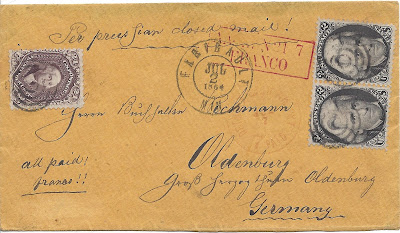 Sometimes, a person was pretty excited that something was fully paid.  I am not sure adding exclamation points make it any more likely that the postal people would notice it was paid enough - but I do hope at least one person who handled this item was a little bit amused.

How many clues on this envelope from Faribault, Minnesota (US) to Oldenburg (Germany) can you find that told the delivering clerk that it was fully paid?

This is a whole topic of its own, but I thought I should show at least one example. 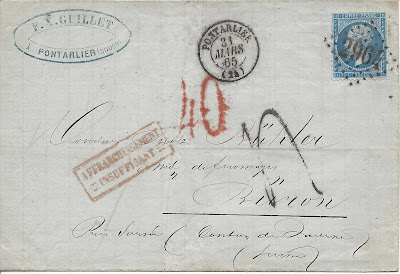 Well - here we are.  A letter that has a stamp on it, so it is possible that postage was paid.  And, there are some red markings on the cover too.   Hmmmmm.

The first clue that this item is NOT fully paid are the numerical markings on this letter.  The red "40" is actually the amount to be collected from the recipient to pay for postage.  Believe it or not, the black 'squiggle' to the right of the "40" is also a "4," which is the same amount due.

The second clue is that there is no "franco," "paid," or "P.D." anywhere to be found on this item.

The third clue is the red boxed marking that says "affranchissement insuffisant."  This roughly translates to "insufficient postage."

In a very real way, postal history can be a bit of a puzzle - but it is an enjoyable one that begins to make more sense as you learn the rules.

Thank you for joining me on the postal history Sunday post.  I hope you have a good day!