I took a quick look at all of the blog drafts to see if one fit what I felt like writing about for Saturday and none of them worked.  This isn't all that uncommon as there are usually reasons why some of these drafts were stuck in 'draft' status.  One of these days, I will do a house cleaning and delete a batch of them.  But, that day is NOT this day.

Today is a day when I will look at some pictures of veggies and let them inspire me to write.  Won't that be fun?

Well, we'll see.  Maybe it will be just awful, then we can all go sit outside and watch a few clouds roll by.  Then, we should all feel a bit better - or at least we can hope that will be the result. 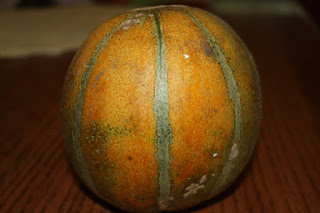 The melon shown above is a Ha'Ogen melon from a few years back.  We loved the taste and texture of this melon so much that we hoped we could find a way to grow LOTS of them.  Sadly, they have always been difficult to grow in any numbers.  They have issues with various bugs and diseases and they seem to be extremely susceptible to any kind of adverse condition.  I will admit that I never really gave them a chance in the high tunnel - perhaps that would work?

I will admit that, at the time, I saw this melon as a way to carve out a niche with its unique taste and color.  It was, in my mind's eye, the melon equivalent to the Wapsipinicon Peach snack tomato.  It looks a little different and people initially shy away from it.  But, once they taste one, they want more... often LOTS more.

Sadly, a couple of things happened since the moment I decided we would try to scale up production of this melon.  First, there was an increased use of dicamba herbicide formulations for warm season applications to soybeans.  Our farm seemed to fight issues regularly at the point in time those applications were going on in the area.  That means a vine crop that might already have been a little 'tetchy' was pretty much a 'no go.'  The market we thought we would have for these melons changed about the same time.  So, even if we had been able to grow a bunch, I don't think it would have been the benefit I initially thought it was.  And, the seed supply was unavailable for a year....  yeah, that would put a damper on things.

We did not start any Ha'Ogen plants at all this year - and it actually hurt a little bit to realize I wasn't even going to try them.  I wonder if I'll plant two or three seeds next year just to see if I can get one fruit to make a moment of summer glorious? 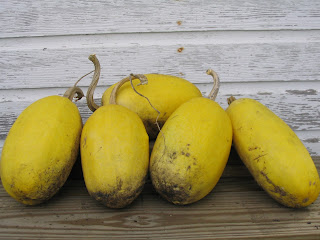 The Spaghetti Squash was my gateway to eating squash.  Prior to growing a spaghetti squash, I was not incredibly willing to heap a pile of cooked squash onto my plate.  But, we tried a couple of these and treated them like pasta - topping the stringy flesh with a tomato sauce.  The net result is we decided that was ok!

Eventually, we found a few other winter squash that we both liked the taste of better than the Spaghetti squash - much to its chagrin.  But, with the CSA, we usually liked to grow some of these to give people who didn't like the butternuts or acorns a bit of a choice.  Without a CSA, we found ourselves motivated to simplify a bit, which meant we did not plant any of them.  We DID seed a few in trays, but we ran out of space in the rows we had designated for squash.  Sadly, these were the odd squash out!

I guess I was feeling a little sentimental when I saw this photo from about 2009.  But, unlike Ha'Ogen, I don't feel this great urge to plant any of them next year.  I guess I would rather find a way to grow a buttercup squash or two instead.   We'll see what happens when we get there. 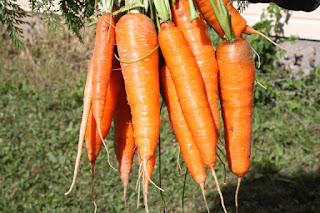 St Valery's carrots (shown above) were the heirloom carrot variety we tended to go to year after year.  Usually, they would do pretty well for us as long as we got them in at the end of April.  Then, last year, we found an open pollinated variety called Dolciva.  They have all of the criteria for a carrot that we are looking for plus one more thing.

They come in pelleted seed.

It's a crazy thing, but our farming approaches have changed so dramatically in the last couple of years for all of the reasons (yes, we've mentioned them before).  One of the changes is that we want our carrots spaced out more than the six row seeder provides for us.  Pelleted seed provides us with the options we want for changing our row spacing for carrots.  So, we found a variety that fits our requirements for taste, size, storage and shape.  Add on top of that - it is not an F1-hybrid.

Oddly enough, I don't have that many fond memories of St Valery's carrots anyway.  Could that be because I don't like to eat carrots?  Who knows?  Maybe I do - but I'm not going to tell! 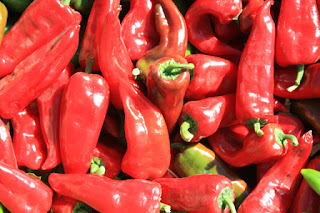 Tolli's have long been one of our favorite sweet peppers to grow.  They grow on small plants and take very little space.  It makes them a great high tunnel variety.  Over the last couple of years, we relied on Tolli Sweet to get us the early red sweet peppers that we put into our CSA shares.  Actually, the last couple of years, we got pretty good at using them and harvesting so they provided fruit deep into October.

And we did not have a single one on our farm this year.

Why?  Well, this time it wasn't for lack of trying.  We did plant some seeds in trays expecting to put a few in the high tunnel.

None of the seeds germinated.

What did we do wrong?  Possibly nothing.  Possibly everything.  We will likely never know.  Other varieties did fine and, happily, the Chervena Chushka's produced well for us to fill this niche.  They just don't provide the early production Tolli did.

And, there you are - stories of vegetables!  Where else can you go for that?  Ok, I am sure there are other places.  But, you came here this time.

So, thank you for reading and I hope you have a great weekend!

Email ThisBlogThis!Share to TwitterShare to FacebookShare to Pinterest
Labels: Just Veg-ing Out, Look in the Mirror