Backing Up First Base 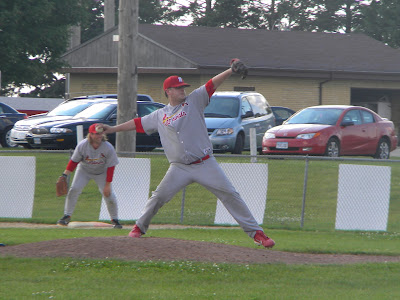 Yep, that's me in the background, playing first base in the adult baseball league I played in some years back.  But, that wasn't the only position I played.  My favorites were center field and pitcher.  But, as a person who throws left-handed, the conventional (and non-creative) wisdom was that I had to play either right field, first base or pitcher.  So, of course, when I was not pitching in high school ball, I played right field (with a rare appearance at first).

One of the things they drilled into us during high school practices was that players who were not immediately involved in a defensive play should be moving to back up that play.  As a right fielder, one of the least glamorous and most frequent tasks was to run to back up first base on any ground ball hit to the infield that might require a throw to first base.

You get the idea.  There was lots of running to back up first.

Did it pay off?  Not usually - other than the fact that I got some exercise.

Did anyone really notice?  Well, they only noticed if the ball got by first base and the right fielder was NOT there.  Otherwise, it wasn't really something people paid much attention to.  Yes, my Dad did tell me I did I good job getting into position to back things up.  And the coach did once or twice as well.  But, really - who is looking for how the right fielder backs up first (other than someone trying to teach another right fielder to back up first)?

Often, if the ball DID get by the first baseman, I had so far to go in the first place that it was unlikely that I could get there any faster than another player.  And, hopefully, we could throw and catch well enough that there would not be that many times a backup was really needed.  But, there were times...

Times when the ball hit a pole on the fence and caromed crazily, making my effort count for something.  Times when someone else forgot to do their job, but I was there, ready to get the ball that had eluded others.

Times like that one time - one glorious time - my effort got me to the ball so I could throw a runner out at third and get my team out of a tough inning.

Tell a right fielder in your life that you appreciate their efforts to back up first and encourage them in their endeavor.  One day you'll need them to throw someone out at third base.