We marked our calendars wrong apparently.

You see, we thought the turklets were coming on June 16.  So we worked hard to have things pretty much ready enough so that we could get the turklets into the brooder room.  It wouldn't be perfect, but it would be doable.  But, here's the thing.  When chicks arrive at the post office, we get a call around 6:30am telling us they have arrived.  Then, we go pick them up.

We got up Tuesday morning - just a little hyped up to get the turklets settled and then on with everything else.

And we didn't get a phone call.

Ok, so we did a whole bunch of other things on Tuesday, including moving the brooder room further forward so we were even MORE ready for turklets on Wednesday morning.  Wednesday was already going to be a pretty rough day, but hey!  They're turklets!  We can squeeze them into the day can't we?  Sure!

Except, we didn't get a phone call Wednesday morning either.  Hmmmmm.

But, we did get that call on Thursday.  So, for your viewing pleasure - turklets in a box. 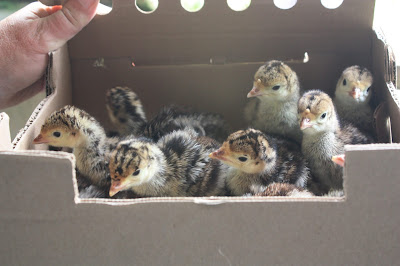 That is only fifteen of the seventy-five birds that arrived.  And here they all are, in their small brooder area.  You might notice that they all decided to start running to one side of their room (closest to the camera).  You see, that wall was down so we could more easily dip each bird's beak into the water and then put them in the room.  These crazy birds wanted to keep coming towards us rather than explore their new space.  Some even jumped BACK into the shipping box.

I'm not sure if this is a good sign or not. 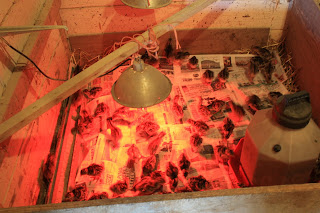 But, by the time we hit the end of the day, the turklets were quite mellow.  Looking good for day one.

For those of you that have sufficient internet - here is a brief interlude of turklets "beeping."