The puddle by the granary was finally gone.


It is not scientific, but there are just certain puddles that we use as a measure of how close our fields are to being workable.  It turns out that this puddle - which has been full more days than not over the past few years (or so it seems) is as good a barometer for such things as anything else we have.

It was dry enough to walk where that puddle usually is on Sunday morning.

We knew we were in for some long ones.

Our best soil has consistently been in our southwest plot over the years.  Since we are working to put in swales (waterway ditches) in the east and north plots, this area has become a catch-all field this year.  The picture above shows how the southern half looked this morning after we completed chores and started work here.

What you probably can not see are the weeded beet and carrot seedlings.  It certainly is NOT our best stands of either crop.  But, they are weeded - which makes them a decent stand, I guess. 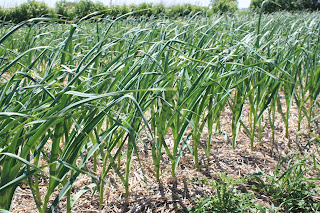 The garlic went into this field last fall.  Once again, this was because we needed to keep the other fields clear for that moment when we could dig some ditches.  The garlic is looking quite good right now.  We planted about 60% of our prior year plantings, so it will be a bit easier for us to handle the harvest and bundling without the help we usually have for that task.  I'm still not sure if we are looking forward to it.  But, we ARE looking forward to scapes - which we noticed are just now starting on the plants. 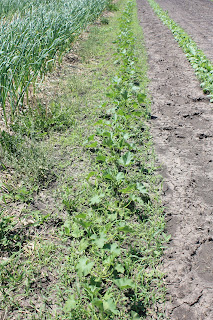 We have had plenty of rain recently - which is why we are pushing so hard now.    Lots of rain usually means lots of weeds.  So, of course, there was lots of cultivation and weeding going on Saturday and Sunday.  The zucchini and summer squash look much better now than they did when I took this picture on Saturday. 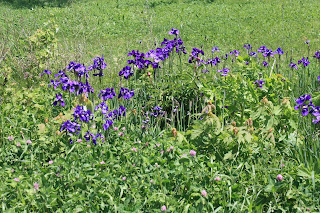 The Siberian Iris are putting on a display too!  We started with just a dozen plants about fifteen years ago and now we have several patches of them throughout the farm.  They do not bloom long and don't look like much the rest of the season.  But, right now - they are fantastic.

I did try to apologize for the hot, strong winds over the past couple of days that took their toll on the flowers.  But, I couldn't really do much about it except be thankful that the flowers have thrived over the years.


After some wheel hoe and hand hoe action, we have a pretty clean field now.  The borage planted between the garlic patches is pretty clean too!

So, why borage there, of all places?  Well, we intend on using some of the garlic space for late zucchini, summer squash and cucumber.  We are hopeful that we can have some nice habitat to keep pollinators interested later in the season - and maybe cucumber frog will like this sanctuary! 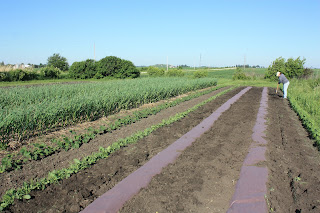 We also managed to put in some paper mulch for the melons that are going in this area.  The ground was  still a little on the damp side, so we had to break up some clumps and push them into the trench on one side of the mulch.  When the soil is a bit mellower, this isn't as much of a big deal.

We admit it isn't necessary to do this for the plants.  It's more for the humans that have to walk this area.  If we don't flatten it a little and get the chunks broken down, we're just asking for a few sprained ankles in the future.  Since we don't like sprained ankles... here we are, breaking up clumps. 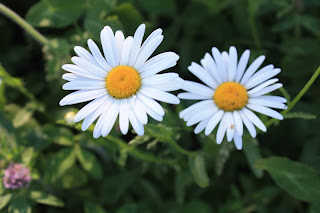 And hey!  The wild daisies are blooming on the farm too.  It seems that they were pretty happy to see the farmers out and about.  It turns out that daisies are an extroverted flower - they like to interact with humans.  Most have a sunny disposition and leave you with at least a little smile on your face.

Here's hoping the rain holds off a bit longer so we can finish up some more of these tasks on Tuesday morning!
Posted by Rob Faux at 5:30 AM