I was trying to remember why it seems like every year - right around the the 15th of June - I go through the process of a reality check as to how much I can actually get done.  This is usually prompted by the question "why am I feeling so tired and overwhelmed today."

So, while you will read this post on the 16th - I just want you to recognize that I wrote it on the 15th.  And, I am doing the reality check and I am asking myself the normal question.

June - the Month of Disaster?
Some of you might recall that June was the month that the well died at the Genuine Faux Farm in 2013.  Things were wet at the farm, of course, that year.  But, wet ground prevents planting, but it doesn't get fresh water to poultry or keep seedlings in trays alive.

If you haven't had to work around the equipment that is used to drill a new well - let me tell you that it is loud and it is hard to not feel like you are clenching your jaw the entire time.  Ok... That's probably because we were clenching our jaws the entire time.  At least it is now just a 'happy' memory. 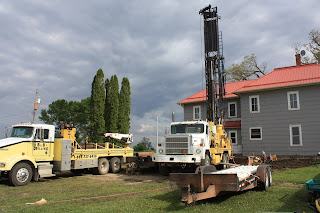 June is also the month when big things tend to break.  Or things break that require big repairs.  One of our key hydrants for water split open and required some major work a couple of years ago.  Once again, the "Snort" visited us.  In this case, it was a mini-snort.  Whenever snorts visit, we end up with lots of earth torn up for some reason. 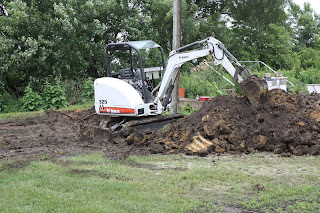 Oh - and June is the month where Buffalo Gnats rule the farm.   Ugh.  We'll rate that as a disaster.  The thing is - it is either WIND or GNATS mid-June.  Take your pick.  You get worn out by the wind constantly howling or you get the energy drained out of you with your blood by the gnats.  We typically vote for the wind, but that doesn't stop us from complaining about it after a long day in it.

June - the Month of Big Change?
It seems like June is a month where we schedule some really big changes at the farm as well.  In 2011, we had the granary re-roofed.  Of course, like so many other things on the farm, the choice was to repair it or take it all the way down.  There really wasn't a middle ground anymore. 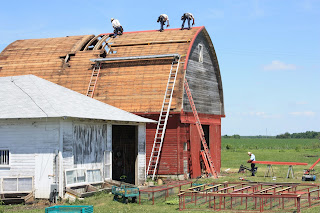 Then, there was the construction of Valhalla, our bigger high tunnel, in 2015.   The long days certainly helped the crews to get things done a bit more quickly than they might any other time of year.  But, the long days were just that... loooong daaaaays.

And remember, we still had to farm too. 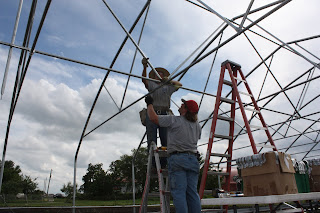 And you can't really forget the kitchen project from last year (ish).  The thing is - that one was just kind of continuous and forever - if you know what I mean.  So, maybe it is unfair to include it in the list. 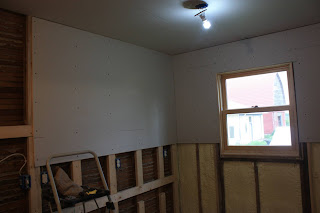 What About 2020?
We have to admit that 2020 is very different than any of the prior 15 at the Genuine Faux Farm.  I don't think either of us has worked so FEW hours outside in the fields and with the poultry than we have this June.  This certainly makes sense when you realize that Rob needs to put in 30 hours per week for his new Pesticide Action Network job.

The net result is that I am not nearly as 'tough' as I have been each of the prior years.  Normally, I'd have spent much of that 30 hours outside moving around.  The stamina to keep at it just isn't there yet.  And perhaps this is the new normal I have to adjust to.  It's going to be interesting and frustrating to discover what things are going to fall off of our farm 'to do' list this season as the time flies by and opportunities to do things are missed.  We'll certainly do what we can to make the misses less frequent than the hits.  But, right now, we're not always so sure what we'll manage to get done.

Check one thing off the list though - we've kept the blog going this far.  It is entirely possible that we'll have to cut this back to a few times a week as I run out energy and time for such things.  But, I think we have built up enough stamina for writing now that it isn't actually so hard to get something put together.

Apparently, I still have the stamina to do things - but they've transferred to the written word.  Is it a good thing or a bad thing?  Let's keep plugging along and find out.
Posted by Rob Faux at 5:30 AM