I've heard them called 'Outhouse Flowers' because there was apparently a tradition at some Iowa farmsteads to plant them next to the outhouse to shield that necessary building a bit more from the rest of the farm.  Hollyhocks are pretty tough flowers that can reseed if you let them.  But, what happens when the hollyhocks disappear from the farm? 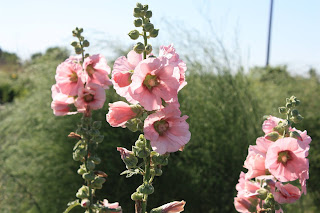 You see, it had been a tradition to have some hollyhocks down in the southwest corner each year and we let them reseed themselves.  The problem is that after a while, the area gets overrun by less desirable plants and you have to start over.  We just haven't given ourselves the opportunity to start over with the hollyhocks. 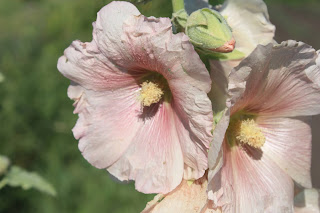 That is the difficult thing about 2020 at the Genuine Faux Farm.  We're trying to "start over" on so many levels.  We certainly have enough experience at the farm to know what we like about it.  And, we actually have pretty good knowledge about how to get to where we want to be.

So, what's the problem?

Two key resources - time and energy
and
Two key issues - too much rain and too many buffalo gnats and now.. mosquitoes.  The wet limits our time and the flying flesh eaters gnaw away at the energy.

It's the same old themes all over again.  If we had cows, it would be deja moo.

Nonetheless, there has been some progress.  We spent some significant time in two plots with the wheel hoe and the soil behaved beautifully - just as we picture it behaving in our farm 'handbook.'  We got some trellising and caging up and the plants look pretty good.  We've been harvesting zucchini and summer squash ALREADY!  Usually, that's a just after July 4 treat.  Meanwhile, the peas we planted on time are just getting going - so they are a little late.  But, still we had a nice big pot of peas tonight as the highlight for dinner.

Keep giving me fresh peas, green beans and a good bit less of the nasty biting bugs - and we'll have hollyhocks before you know it.
Posted by Rob Faux at 5:30 AM