We officially celebrated our 10th Anniversary as the Genuine Faux Farm this Spring.  We started GFF in May of 2005 (we have lived on the farm since 2004).  So, this was actually the 11th year of offering a CSA program.  But, we figure we can continue to celebrate 10 years for a little bit yet.

As a part of this celebration, we're going to do some "retrospective" pieces.  For those that have been with us for some time, you might enjoy seeing some of this to remind us all how far we've come.  If you have not been with us all that long, you get the benefit of seeing where we've been without having to go through the growing pains with us!

For those who have interest, you may notice links in this post to other blog posts from 2011.  They actually give a pretty good feeling for that year, so feel free to take them and explore. In particular, you can see what we thought of the year with our 2011 in Review post that we put out there in January, 2012.

After a pretty rough season in 2010, we were really needing things to go reasonably well in 2011.  And, if a person were to review some of our crop yield numbers, you would see a lot more variety and stronger numbers all around.  Some things, like our beans (788 pounds), lettuce (874 pounds) and summer squash (2909 fruit) did us proud that season.  Not too many huge bumper crops, but enough to redeem our faith in our abilities to grow decent amounts of good food.

But, if 2011 is known for anything, it would likely be for the rapid and significant progress on the infrastructure of the farm itself.  The new high tunnel was about to enter its first full season as was Durnik the tractor.  In a very real way, our response to the difficulties in 2010 was to dedicate ourselves to making this an even better farm than it was in years past.  To do that, we realized the barn was no longer going to be a working part of the farm and we had to adjust accordingly.
So, the first effort made was to begin developing the "Poultry Pavilion."  The room for the turkeys was already in place, but we needed to get a hen room up an running if we wanted to get the hens out of the barn.  As it was, we ended up using the turkey room over the Winter while we continued to work on the project.  But, that's how things like this tend to go - especially when you are working around all of the idiosyncrasies of an older building.
If you want a building to remain on a farm, you need to make sure it has a decent roof.  The granary was on tap for that roof in the Spring.

Perhaps it is even more amazing to me, as I look back, how much many of the farm's buildings changed that year.  The white building (called the Truck Barn) was going to look very different by the time we reached the end of the season.  We took down one of the garage style doors that was essentially stuck in place and shored up the entire East side of the building.  We reduced the door size on the West and we fixed both the Southeast and Northeast corners of the structure.
Some of our progress was less visible than what you see above.  We added new electrical service to both the Truck Barn and the Poultry Pavilion and made some improvements on how each building was used.

Looking back, it is obvious that we had been hurt by 2010 and that we were intent on finding ways to prevent that same thing from happening again.  Everything we did was within budget, but the scale was dramatically different from many of our prior years.  This was the beginning of a whole farm evolution that continues to this day.
We added Barty Senior (the walk behind tractor/tiller), the portable feed wagon was integrated into the mix, we bought our first running gear and put a deck on it and managed to acquire some appropriately sized implements for Durnik that Fall. 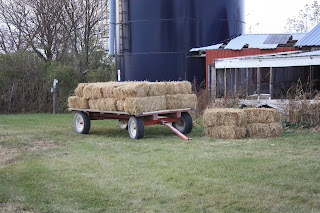 The modifications to the farm weren't limited to buildings and equipment.  We worked to reconfigure some of our fields in order to make the operation more efficient with our changing tool set.

In fact, reviewing 2011 becomes more interesting if we consider how these changes have been adapted further by 2015.  The field reconfiguration was taken a step further this year when we added our second high tunnel.  Many of the implements we purchased, such as the two bottom plow and rotary mower are still important parts of our operation and Barty is incredibly important.  The Poultry Pavilion has two poultry rooms and areas to store straw now and the pastures behind the building have some fencing, trees and bushes added since that time.  The truck barn sees a great deal of activity every year and the granary is an important storage building for feed and equipment.  Meanwhile, the remnants of the barn slowly fall to the ground.

But, the most lasting improvement to our operation came in the form of a group of farms that agreed to take the time to visit each other during the growing season.  The Gang of Four was born, in part, as a result of the struggles of previous years.  Since that time, we have come to know some fantastic people who also have a passion for growing quality food using sustainable methods.  And, we have learned that part of sustaining our operations is finding and nurturing relationships with others who share some of the same concerns and trials.
Believe it or not, this was our fifth season collaborating with our good friends.  As is often the case when you are involved in something good, you can't believe it's only been five years.  And, at the same time, you can't believe it's already BEEN five years.  Here's hoping for many more!
Posted by Rob Faux at 8:13 PM

Email ThisBlogThis!Share to TwitterShare to FacebookShare to Pinterest
Labels: Look in the Mirror, Ten Year Tenure