There are any number of things that clutter up my brain during the growing season.  Some of that clutter seems to spill out and land in our CSA newsletters, egg newsletters, facebook posts and various scraps of paper on my desk.  It can get to be a real mess and it has spilled over into a batch of "DRAFT" posts for the blog that consist of short snippets for ideas waiting for the moment that I look at them and say "HEY!"

So, to continue the introduction that I so rudely interrupted with no one's help... these draft posts may catch my attention and I will nab one or two and try to make something out of them.  More often than not, they go to the sad little draft post pile that sits next to the partner-less socks in the laundry room - never to be heard from again.  Until, of course, that very same idea pops back into my head.  If only those missing socks would return someday.

I've done numbers posts in the past, but the motivation for them differs each time.  This one started with this: 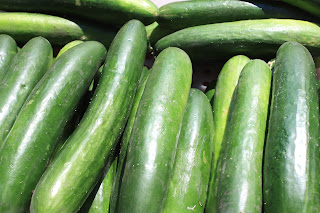 And, we actually received some commentary including this from Melanie Hoffner:

"it seems crazier that you COUNTED 1059 picked cucumbers this week..."

Of course, Mel had to have the last word
"Congrats on setting a new record!"

This actually encouraged me to write a post about counting that explained why we do the counting we do.  For some reason, I found another draft post that had the data above and the facebook conversation in it.  Since we have a few other FUN numbers to share, I thought I'd go with it.

B. 151 out of 150
Do you remember tests in school where some of the kids got more points than were supposed to be possible when they took it?  Or perhaps, you've heard the athlete in the interview talking about giving 110% (or more) of their effort.  As someone who has taught, I can understand where the first thing comes from and why it is used.  On the other hand, you have to wonder where athletes who give 110% are getting that extra 10%.  If you give 100% of what you have, you have nothing left.  So, that 10% has to come from someone else - probably the guy who gets griped at for "lack of effort."  It's not his fault, this guy is taking 10% away from him! 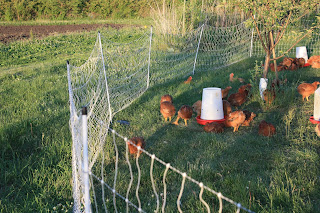 Our farm entry for getting more than is possible is our third broiler chicken batch.  We ordered 150 chicks for each of our batches this year and we typically process between 140 and 148 each time, with a goal of 145.  So, this time as we were picking up chickens on a dark, windy and rainy night we figured we were done when we got to 150.  In fact, we were very pleased that we had 150 birds to process.  That has not happened (100% success rate) before.  So, we took off to Greene and the processor... er... park.

The next morning, I found another bird still hanging out in the broiler chicken area.  So, in the end, we had 151 out of 150 birds make it to the processor (we took the straggler in with the ducks).

How could this happen?  Well, the hatchery usually gives us between 1 and 3 extra chicks to compensate for the possible loss of one or two chicks in shipping or in the days soon after arrival.  This time, we apparently did well with keeping even the 'extras' alive. 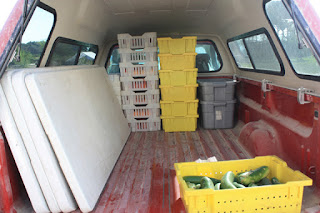 I have to throw this one in there because it's a number that I know other folks who do farm share programs will relate to.  We have exactly two more farm share CSA distributions left to do in 2015.  While I'm not one to be anxious for things to end, unless maybe I'm getting a filling in a tooth or some such thing, I can say that we are ready to be finished for the year.

There is just a certain amount of underlying stress that goes with the CSA.  We're always assessing and re-assessing what we have available, when it will be ready and how we're going to divide it amongst our subscribers.  This is not inherently a bad thing, but everyone can relate to the mild relief completing a long project can provide.  This year, we will have made CSA deliveries 28 weeks.

D. 34, 25 and 1
These numbers represent the number of tomato (34) and pepper (25) varieties we grew on the farm in 2015.  The tomato varieties include cherry and snack tomatoes and the pepper varieties include the hot peppers.  Of these varieties, exactly ONE of them is an F1 Hybrid.  The rest are open pollinated and most of these are either heirloom or heritage varieties. 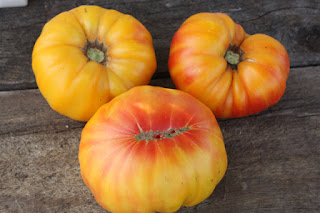 There are a couple of varieties in the tomato list that may not return next season for various reasons, but it is unlikely there will be many changes on the pepper side of things.  And, you know us, it is likely we'll trial a different variety here and there.

Some of the varieties we grow are only represented with five or six plants on the farm.  For example, Gold Medal (shown at left) only had six plants.  We love Gold Medal, but it just isn't suited to carry the production load for our farm.

If we use Gold Medal as a case study you might begin to understand what we mean.  Gold Medal typically produces tomatoes that average over one pound in weight.  These tomatoes are extremely sweet and have a wonderful taste and texture.  However, their large size limits the number of people who will take them (not everyone wants a 1.5 pound tomato).  Also, they have a thin skin and tend to split in transit, making them less attractive to many customers.  Finally, larger fruit size typically means there will be fewer fruit per plant.  And, we lose a higher percentage of these to splitting than many other varieties.  When you are doing a CSA, it's the number of fruit, not the number of pounds, that matters.

We love having them as a part of the diverse options we provide to ourselves and to our customers and we've found that five to eight plants are usually sufficient to provide those options.
Posted by Rob Faux at 6:40 PM