There are a number of manufactured photos floating around right now on social media and I understand why people are sharing them.  But, before I talk too much about them, let me share one. 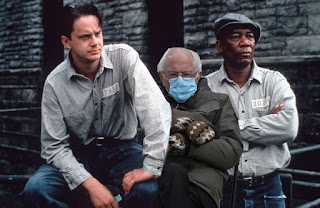 Apparently one picture from the inauguration shows Senator Bernie Sanders sitting in a chair on the steps with his legs crossed, mask on and some nice wool mittens.  It does not matter what you think of Senator Sanders for this discussion - what matters is what is happening with this photo.

Because the background of the original is fairy spare, it isn't so hard to lift the image of the Senator and insert it into other pictures - like the one above.  If you do not know the movie, this is from the Shawshank Redemption.  Someone has placed the image of Sanders in between the two main characters. 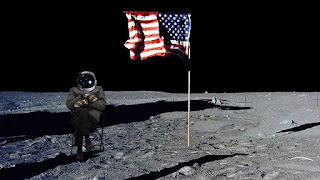 And here is another one with a photo of the US flag on the moon.  He sits with the space helmet and his nice wooly mittens.  The combination is whimsical and worthy of a chuckle. 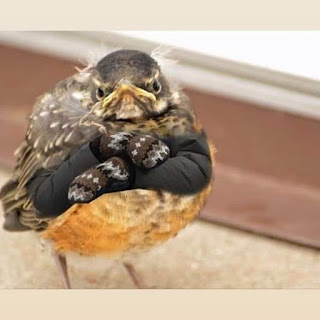 Then, there is this one with a baby Robin and the Senators arms, woolly mittens and all, superimposed onto the bird.  Again, worthy of a laugh.  It is clearly in fun and it is clearly made up. 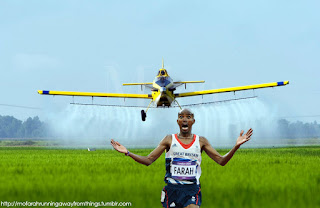 And this is from 2012.  Pictures of Mo Farah running away from things was the rage on social media.  Farah was widely photographed (and criticized) for his reactions in the Olympics.  But, people had some fun with the image, putting him in various situations, some funnier than others.

I get it that it is fun and/or funny to do this.  But, I wonder if we really, really understand what this all means?

It is easy to create things that are not real for social media.  This is especially true because files are compressed and the quality is not the highest for these venues.  The tell-tale signs of manipulation can be hidden.

Feel free to chuckle.  Feel free to participate.  But, there is a price - and that price is your increased dedication toward being a critical thinker.  I'll just leave it at that.  I know it's a downer for Friday - but it's an important reminder.

Man - I really am a spoilsport, aren't I?  Not sorry that I pointed it out.  Sorry that I felt I had to.  We'll be more entertaining on the weekend in the blog.