The Joys of Being Different 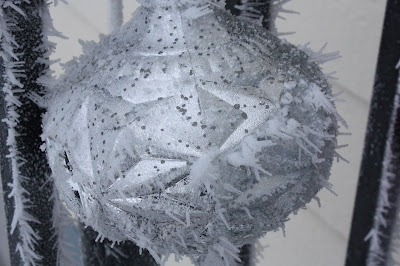 When we moved to the farm in 2004, we had already lived in a couple of 'work-in-progress' houses.  While it is true that every building requires maintenance and home ownership implies work to be done, I suspect that not everyone is as willing as we have been to take some of these properties on.  For example, our farm house had all of one.... count it... one plug-in for the entire upstairs floor.

Tammy and I do not pretend that we are the best at fixing up old houses, but we can hold our own.  Over time we have recognized that we will just be too slow at some projects and it is better to hire some help once we build up the funds.  And, other projects just go.... slow... because that's the way it is when you do it yourself.

In any event, one thing that has not been completed is the light for the back entry of the house.  To be perfectly clear, there never was a working light for this back entry that we know of... so it's not that we took one down and never replaced it.  Our solution has been a couple of battery powered lights that hang on the railing of the back deck.  They look pretty nice and give a little bit of light on the darkest nights.

And they also look pretty cool when they get covered in frost! 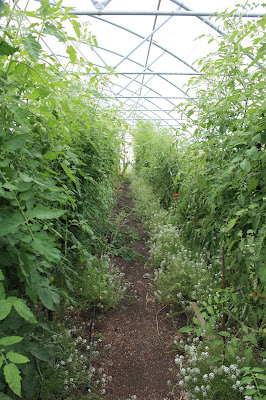 We are also, apparently, a bit odd in our choices for how we grow things.  You see, we have this tendency to want to add diversity to our plantings even though we have been trying to grow commercially since 2005.

Simply put, adding diversity adds complexity.  Added complexity usually adds labor or introduces inefficiency.  And when labor is your premium resource, that would often be considered a poor choice.

Why?  Because we believe that there are ways we can efficiently incorporate a diverse set of crops without completely giving up a reasonably efficient operation.  In fact, we have been willing to try things because we want to find some of those approaches and encourage others to do them as well.

One example of this is shown in the picture at the left.  This is in Eden (our smaller high tunnel), showing a path between two tomato rows.  If you look towards the base of the plants you will see sweet alyssum flowering.   This actually seemed to be a fairly good way to get a little diversity into the high tunnel's ecosystem without creating direct competition for the cash crop.

In fact, once these flowering plants were established, they actually helped to hold down any additional weeds that might want to get started later in the year.  There was more pollinator activity in the area and we kind of liked the fragrance as we harvested tomatoes.

The downsides?  Well, once they got into the path, they did have a tendency to try to trip us up.  But, that was handled by cutting them out of the way - or even pulling a plant or two if necessary.  The real issue was the following season when all of the volunteer sweet alyssum came up and competed with the non-tomato crops that went into these beds.  That was our fault because we suddenly had even less time this summer to do work on the farm.  A normal year and we would have handled it just fine.

Sometimes it is good to be different.  And in our case, I don't think we would have it any other way.
Posted by Rob Faux at 5:30 AM